Beyond the Pond – Becky Iaconelli

4/19/2011 – Adventure isn’t hanging on a rope off the side of a mountain. Adventure is an attitude that we must apply to the day to day obstacles of life; facing new challenges, seizing new opportunities, testing our resources against the unknown and in the process, discovering our own unique potential. -John Amatt organizer and participant in Canada’s first successful expedition to the summit of Mt Everest.

“It is always an adventure,” responded Becky Iaconelli, the wife of Bassmaster Elite pro Michael Iaconelli as she was asked what it was like being married to Mike. Understanding that “adventure is an attitude” one can see how Mrs. Iaconelli would describe her relationship with the 2003 Bassmaster Classic champ as exactly that. 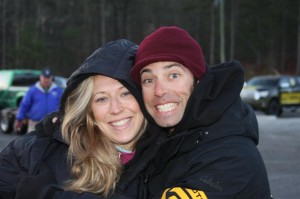 The Iaconelli’s first crossed paths by a chance encounter at the 2006 ICAST event in Las Vegas. Iaconelli had set sail for Sin City for the largest annual industry conventions and little did he know this would become the backdrop where he would meet his future wife. Accompanied by friends, the then Becky Mattes was in town for a “girl’s weekend out”.

After being turned down on his official request for a date, Iaconelli happened to be in the same hotel that the “girl’s weekend group” was eating dinner and he caught the eye of the soon-to-be Mrs. Iaconelli again who agreed to join him at the bar.

As someone who had never fished before in her life, she was oblivious to the celebrity status of the man she sat with and was bewildered by the constant parade of people seeking Iaconelli’s attention and calling him away. Remembering being annoyed by his repeated exits from their conversation Mrs. Iaconelli stated, “I told him, if you’ve got something to do I will go back and hang out with the girls.” Instead of letting her get loose, Iaconelli took her along to the next meet and greet.

Getting a first-hand look at what all of the hubbub was about Mrs. Iaconelli said, “I couldn’t figure out what was going on we went over to a group of grown men that were drooling all over Mike; I thought I was on the TV show Punked or something.” 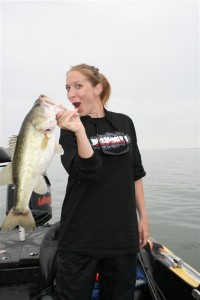 With the fishing world a foreign concept to her, Mrs. Iaconelli didn’t really comprehend the popularity of the accomplished pro bass angler, television star, and author that stood before her. She recalled parting ways in the “Entertainment Capital of the World” still not realizing the gravity of his “bass rockstardom” and said, “It took about a week or so to register with me, just how famous he was.”

Within a short time, Iaconelli was calling back for a second date as he drove through Washington DC; where she called home. When he found out she had gone for a family visit for her brother’s birthday dinner in Virginia. The 2006 Anger of the Year’s Toyota took a turn for the family gathering and planned their second date as “meet the parents”. Recalling this situation playing out Mrs. Iaconelli commented, “At the time it seemed normal but I remember after I told my parents he was coming it seemed kind of weird.”

For their third date the couple hit the water. In an attempt to share his passion for the sport Iaconelli took his date on her first fishing trip. She remembers this well saying, “He took me up the river and after a 65-MPH ride and bird poop on my face, he learned about my competitive nature because I just wanted to catch enough fish to beat him, even though I had no idea what I was doing.” 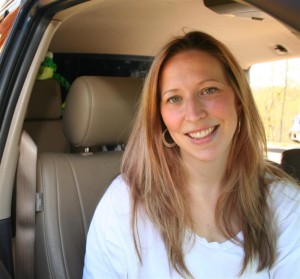 There time together blossomed into a long distance relationship over the next year while Mrs. Iaconelli wrapped up her job with a major liquor distributor and launched her own business as an interior designer. In the summer of 2007 she made the move to New Jersey; Iaconelli’s home state.

The kick off of the 2008 season resulted in Iaconelli needing a travel companion/driver and who better for the position than his then girlfriend. “Uncle Don wasn’t going out on the road that year and it seemed like a no-brainer,” said Mrs. Iaconelli as she described her inclusion into the Iaconelli business empire.

As the weeks went by she began to take on more and more of the business responsibility. She explained that she started volunteering for tasks and it evolved from there saying, “I took care of one problem and it impressed Mike so he gave me that role and it slowly developed into what it is now.”
“Mike is the fisherman and the face of the business and behind the scenes there is the peacemaker, the go-between, the scheduler, the planner and the contract negotiator; and that is me,” said Mrs. Iaconelli as she discussed the balance they have found to make the Iaconelli team work on an equal level.

She continued saying, “Without him none of this would exist and without me working with him we wouldn’t have been able to take it to the level we have achieved.”

Aside from business she also became an “on the road” practice partner. This aspect of her duties launched with a rockier start with a couple of mishaps that began at Amistad. As Iaconelli once caught her eye in a hotel lobby in Vegas, he repeated the act in the literal form and caught her eye again, this time with a frog. After hooking her in the face, he did the noble thing and removed the topwater bait from her eye. “He told me I looked fine and we fished the rest of the day; when we got home the whole side of my face was swollen and I had a black eye,” she said.

The next stop she was met with a repeat performance of facial catching as he casted again and this time hooked her through the nose. She stated, “This time after he yanked it out, I didn’t’ ask how it looked, there really was no point and I knew we were going to continue fishing.” Mrs. Iaconelli has definitely taken a few for the team.

The Iaconelli’s team attitude is only matched by their attitude of fun and adventure. The business isn’t their only joint venture and their sense of humor is also a suitable match as the many of their friends can note.
On the anniversary of their meeting, the couple returned to Vegas for another year at ICAST. The industry event evolved into an Iaconelli engagement when the City Limits star handed a fortune cookie with the “big question” inside to his soon-to-be fiancé. Explaining she was undaunted by the impending monumental wedding day plans, Mrs. Iaconelli stated, “I picked a free week in the schedule and planned a whirlwind wedding in less than 90-days.”

The twosome continued their wedded adventures by getting remarried last year as they returned to the place they met …Vegas. The big showing of ICAST could’ve taken second billing to the Bassmaster Elite and his bride’s pirate wedding. Dressed in full buccaneer garb, the Iaconelli’s renewed their vows with a spirited “ARRRGH” to the officiator Capt. Jack Sparrow. 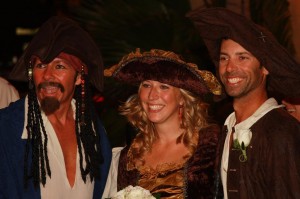 Mrs. Iaconelli looks back fondly on the day saying, “I love pirates and we thought it would be a heck of a lot of fun to have all of our friends at this crazy wedding and then party all night.” Revealing she was secretly pregnant at the time, Mrs. Iaconelli said she snuck glasses of soda water all night and no one ever knew.

As they battened down the hatches and moved on from the pirate wedding, the Iaconelli’s made room for their stowaway and were soon welcoming their new baby boy to the family. Their new treasure, Vegas Michael Iaconelli was born February 9 and was named for the city that started it all. While reports stated that dad said he was born with a fishing rod in hand, mom didn’t confirm. However, she did say, “Vegas has been on the road and at every weigh-in since he was three weeks old.” 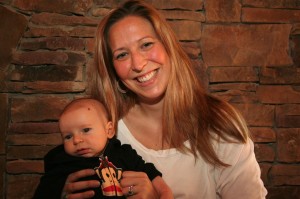 For the upcoming year’s anniversary the Iaconelli’s have a White Wedding in the works. With baby Vegas in an all white tux, the pair will require all white for all guests. In response to the question, “Will it be formal all white?” Mrs. Iaconelli stated, “Mike says whatever it is if they are in all white, they are allowed in.” This leaves the doors open for more Iaconelli adventure and fun; the pictures should be awesome.

Mrs. Iaconelli loves the world of fishing she has become a part of and exclaimed, “ I have everything I ever wanted…a husband, the girls, Vegas; I am a mother, I am passionate about our business because it is ours and it is about my husband; I got everything anybody could ever want out life at 33-years-old.” 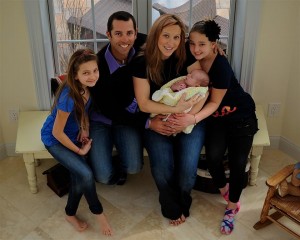 Sharing all of her desires have been met and that the biggest change since their original vows has been that she has to remember her last name is different now, Mrs. Iaconelli said, “We were already partners, we were already operating the business we already had built a house together; nothing really changed, it is still an adventure.”