Dynamic Blog – A Morning with Casey

It’s Day One of competition at the Bassmaster Elite Series Diet Mountain Dew Mississippi River Rumble in La Crosse, Wisconsin. The sun sets late and rises early. The days are long. And for 29-year-old Casey Ashley, a 2-time winner on bass fishing’s toughest trail, the day begins in a hotel parking lot, at a speed matched well to his thick, near whisper, of a drawn-out southern drawl.

5:30 a.m. – Casey walks out of his hotel, and adds instant calm to chaos. “Nah, ain’t no need to be in a hurry,” he says, as other competitors file into a line of truck and trailers exiting the hotel parking lot like morning commuters at rush hour.

5:38 a.m. – Before hooking his boat to his truck, Casey arranges five Quantum EXO rods and reels in perfect order on the port side of his Triton that he’ll use mostly for Texas rigged plastics and jigs. The starboard portion of his front deck is saved for frogs. Topwater frogs were much a part of the dominant pattern for successful anglers during the Bassmaster Elite held here in June of 2012, and they look to be again this year. Two of Casey’s frogs are shades of green and yellow, but a third is a more radical looking ribbit with a silver belly and purple legs. “I’ve never thrown that one, but I just might if I get bored throwing the other two,” laughs Casey. In a vocation 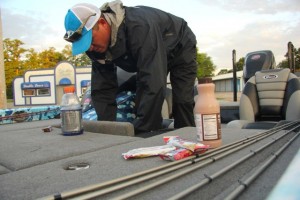 saturated with stress, the accomplished young pro seems to approach his profession more like the ‘toes in the sand’ situations he loves to indulge in when not competing.

5:43 a.m. – Casey is the last pro to pull out of the hotel parking lot. What was a traffic jam of fiberglass thirteen minutes earlier is now a lonely looking patch of asphalt. “This river is fishing a lot different this year. You could get 50 bites a day last year, but in practice Monday and Tuesday, I fished 15 hours for 15 bites a day,” he explains with confirmation of the days being long here.

5:47 a.m. – Casey wheels into a Kwik Trip convenient store and snags a bag of ice, three strawberry Kellogg’s Nutri-Grain bars at 120 calories each, and a chocolate milk. “I’m not much on drinking coffee in the summertime, but I’m fixin’ to suck the bottom out of this chocolate milk,” he grins.

5:51 a.m. – He jumps back in his Toyota Tundra. Something’s missing this morning. Music. Predictably, Casey, who once recorded an album in Nashville, chooses to play Kenny Chesney’s “Welcome to the Fishbowl.”  Specifically, the song, “El Cerrito Place.” Asked why Kenny Chesney is his all-time favorite artist, Casey 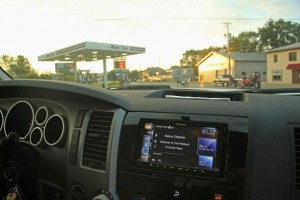 responds, “I can relate more to his lyrics than any other artist. Early in his career, he wrote about Myrtle Beach, and that was about the same time I was tearing the sand off the streets in that town. That’s when I really started liking him,” he reflects. “People tell me his new album isn’t that great,” he adds. “That’s fine, I reckon he’ll get it figured out one of these days,” he concludes with a roar of laughter, mocking those who doubt his favorite artist, who has recorded 14 albums thus far that have reached ‘gold’ status or higher.

5:55 a.m. – Casey meets his Marshall for the day, Chad Haabala, a 26-year-old Wildlife Management major from North Dakota State University in Fargo, who carries a camera to “help remember all this, and remind my buddies of what they missed by not hurrying to sign up to be a Marshall fast enough. I marshaled last year at this Elite, and I had so much fun, I made sure I got signed up in time to do it again,” says Haabala.

6:05 a.m.  – Casey is launched at Veterans Freedom Park in La Crosse and floats in anticipation of the day ahead while making last minute adjustments to the odd-looking silver and purple frog he’ll throw if he gets bored with the other two shades of fake amphibian lures. “I think I can catch five bass today, the problem is, the bass that weighed 3-pounds here last year seemed to have turned into 2-pounders – I’d take a 12 ½ pound limit today and be real happy.” 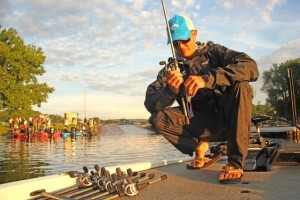 6:15 a.m. – America’s National Anthem is sung by a young girl presumably from the La Crosse area as the sun shines clear and bright in the seemingly room temperature perfect morning air.

6:35 a.m. – Casey’s boat number is called. “I don’t get nervous throughout the morning, but I still get psyched as I’m runnin’ to my first spot,” says Casey. As his Triton surpasses the 70 mph mark, it’s the first time all day the laid back South Carolina pro has been in any sort of hurry.