Lake Oahe and the mind-boggling 370,000 acres of surface area this fishery encompasses must be intimidating to all Bassmaster competitors. But for an Elite Series rookie like Cody Huff, who had never seen this body 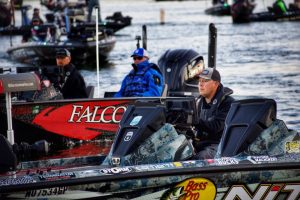 of water before practice began on Sunday, the task of breaking down Oahe could seem downright daunting.

Add in the fact that Huff came into this event near the Classic cut line in Progressive AOY Standings along with being in the hunt for winning the Rookie of the Year title, and you have a recipe tailor-made for stress and nerves.

The truth is, the former Carhartt Bassmaster College Series Champion really isn’t feeling the pressure this week and wasn’t overwhelmed with the idea of finding enough fish for a solid finish on Lake Oahe. Since his days as a college fishing standout at Bethel University, Huff has proven he can perform when the stakes are high.

“The nice thing about this event is all these other guys haven’t fished 10 tournaments here either,” Huff explained. “Sure, I had never seen Lake Oahe before, but no one in this field has a lot of experience here. It’s nice to fish places you’ve been to, but I’ve got a long way to go before I can match 90% of this field with historical knowledge at any place we visit. In a way it’s more of an even playing field.”

This calm, even-keeled demeanor is a trait of many of the best bass fishermen in the world, especially the young phenoms who continue to break onto the professional fishing scene. Huff has carried himself this way since the first day I met him. Thanks to a solid upbringing by his salt of the earth family, that instilled a no-nonsense work ethic in Cody from a young age.

But being as cool as a cucumber doesn’t mean you automatically find and catch bass. Huff recently posted a 2nd place Elite Series finish on Pickwick Lake. Pickwick is a sizeable, well-known fishery that commonly holds major tournaments with upwards of 250 boats. All that said, Pickwick makes up 43,100 acres of surface area. That means you could fit over EIGHT Pickwicks within Lake Oahe. “Big” doesn’t do this fishery justice.

How in the heck does a 25-year-old dude from Missouri show up to South Dakota and find enough bass to compete on the fourth largest reservoir in the world?

“I wasn’t able to come pre-practice last year, so I tried to make up for lack of experience with map studying,” Huff said. “There really isn’t much bass fishing info about this place online, which lead me back to basics. It seems like if you are trying to catch a smallmouth anywhere in the country you want to find bigger than average boulders.

“So, I used Google Earth to look at the banks and search for areas with big rocks. I marked these spots and transferred them to my Garmin Active Captain on my phone. When I launched my boat on Sunday, I already knew the areas I wanted to look at and focus on. Having a game plan really can make all the difference.”