Ask Elite series competitors what they think of Lake Oahe and you’ll likely hear one of these words in their response: unique, massive, weird, or different. These are some of the buzzwords this week for the Guaranteed Rate Bassmaster Elite at Lake Oahe and they are all absolutely true. The scale of this Missouri River reservoir is hard to comprehend. 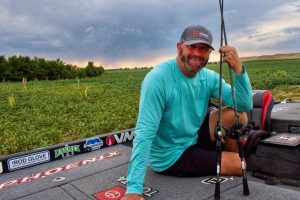 With over 2,200-miles of shoreline and maximum depths of over 200-feet, Oahe earns the moniker of massive and is unlike any other fishery on the tournament schedule. And that’s just the lake; the surrounding terrain, the dusty gravel roads, the scenery, and the rural feel in this area of South Dakota give off a vibe that is not at all typical of professional bass fishing derbies.

Elite Series veteran Gerald Swindle summed it up in a social media post upon arriving to Mobridge.

“When I think of gravel roads, I don’t normally think about smallmouth bass,” Swindle said.

The Team Toyota pro added nearly 1,400 miles to his 2022 Tundra while making the 21-hour drive from Alabama. This fishery is a long way from home for just about everyone in the Elite Series field, which is partially why this event is so intriguing. Oahe is a wildcard.

Even though this is the Elite Series second time to this fishery, the 2018 event was held out of Pierre, SD, which is over 100-miles as the crow flies from tournament HQ this week in Mobridge.

“After three days of practice I have literally not seen any of the same water I fished in 2018,” Swindle said. “That sounds insane, but on this lake it’s easy to do. I’ll be honest, with the way the wind blows here I don’t want any part of a 100-mile boat ride (each way). In my opinion, the guys who make the long run to the lower end of the lake will have a strong chance of winning this tournament… if they can make it back each day.”

En route to amassing $2.5 million in winnings and two Bassmaster AOY titles, Swindle has plenty of experience with wind, waves, and long runs. But he’s opting to avoid those factors this time around. Instead Swindle plans to stay relatively close to takeoff with two rods on the deck of his Phoenix boat, keeping his baits wet as much as possible. He said Minn Kota Spot-Lock and an emphasis on not getting in a hurry will be key for him on Oahe.

“These fish disappear like the dust you kick up driving on the gravel roads around here,” Swindle explained. “One minute the dust or the smallmouth are everywhere, and the next they settle out of sight like they were never there. It’s almost spooky. You can’t get in a hurry and try cover water with your electronics or spot hop here, or at least I can’t. You have to give the fish time to show themselves.”