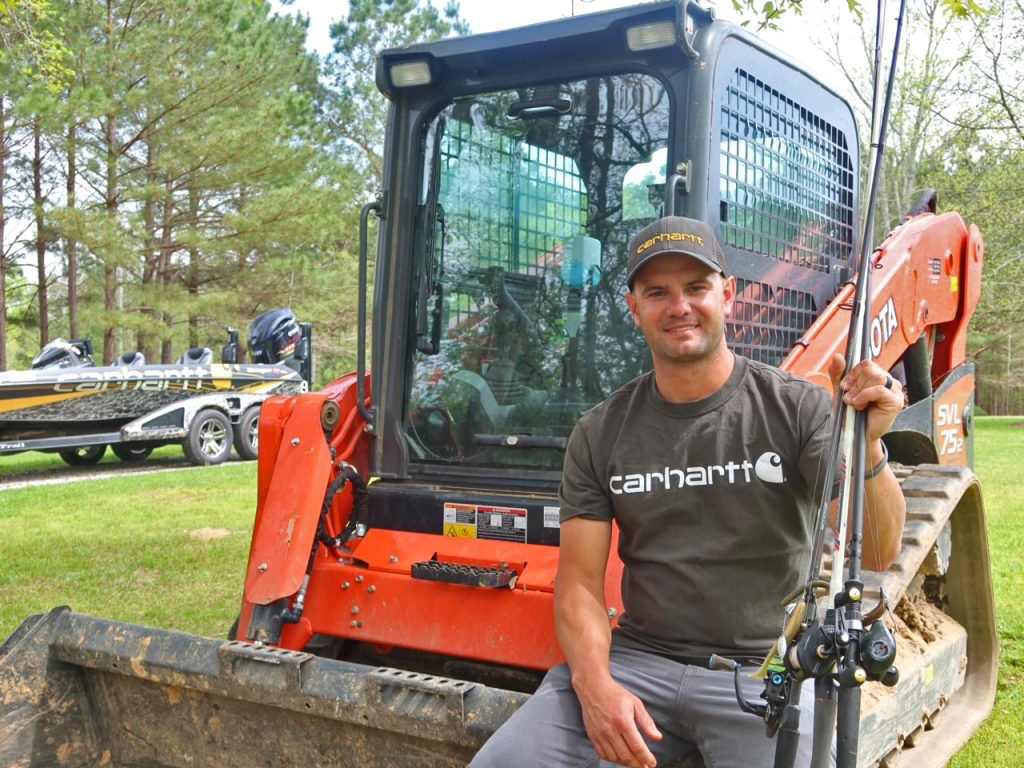 discovered himself to be in a
bit of a career identity crisis during the Covid-19 pandemic. His heart
is torn between his Yamaha powered Ranger and a bright orange piece of
heavy equipment.

While Lee is certainly finding great pleasure in fishing safely five
minutes from home at Smith Lake, the pause in organized pro events has
also provided a chance to do a lot of work around the house with wife
Abby this spring – and that includes piloting a Kubota skid steer loader
his good buddy Grant Hopson loaned him.

In fact, Lee admits he loves the skid steer about like fat Smith Lake
spotted bass love to eat a platinum white colored 3.8” 6th Sense
swimbait. “Abby is spending a lot of time inside doing her woodwork
projects, and I’m constantly outside on the 24 acres we bought next to
Smith Lake riding the skid steer,” says the former Auburn engineering
major.

So far he’s used the Kubota to clear nuisance brush he replaced with
rye grass for an expanded lawn, and pushed a ton of dirt around with
hopes of restoring an old dried-up pond on their property. But his most
admirable effort on the Kubota came last week when deadly tornadoes tore
up Mississippi, Alabama and Georgia.

“I don’t normally get too nervous about tornadoes. I’ve grown up with
them as part of life in Alabama. Plus, Abby and I have a basement to
take shelter in. But when the TV weather radar shows you’re directly in the path – it’s a whole different level of anxiety – and last week it
was headed straight for us,” says Lee.

The great news is their home was not damaged, but a large pine fell across their front road, and took out their power lines too.

In a dark pouring rain, Lee launched into action with the skid steer,
and once he and others determined the electrical lines were dead, he
cleared the fallen pine off rural highway 222 to free passage of local
traffic.

“Abby jokes that I became the newest member of the Brushy Pond, Alabama fire and rescue squad that night,” grins Lee.

But really, if you know Matt Lee, his willingness to provide help is really no surprise.

Make no mistake, he’s had a blast getting to fish so much more than
normal on Smith Lake where tons of talented local anglers call home,
including the formidable Wiggins brothers – but there’s just something
about that Kubota that Lee loves too.

“Riding that machine, pushing dirt around, and making things better
than I found them is the greatest therapy in the world,” says Lee. “In
fact, aside from pro fishing, this unexpected time off from the
tournament schedule has helped me realize a career as a heavy equipment
operator would be my second dream job,” he concludes.