The team at Denali Rods not only manufactures some of the finest rods on the market, but they do a great job educating the end user about the quality of their goods and just fishing in general.  Their series on selecting the right rod has been solid reading, and while they focus on specific Denali products, if you read closely, you’ll be able to find description of rod characteristics that will help you select the right rod for any situation; whether you chose a Denali Rod or another quality brand.

Check out what these three Denali Rods pros have to say about rod selections for Carolina Rigging.

If you don’t mind a blatantly terrible pun, I want to formally petition the powers that be to change the name of August to dog-ust. In most parts of the country, the water temps have climbed well into the 80’s and the fishing is approaching its seasonal worst. Fish this time of year can be notoriously tough to catch, and although their metabolism is very high, getting bites can be downright impossible outside of peak feeding windows.

Although boring to some, Carolina rigging can be one of the most effective tools for catching August fish across most of the country. It allows anglers to thoroughly present baits to bottom dwelling fish in practically any depth or cover type, and has bailed out many anglers when the going gets tough. 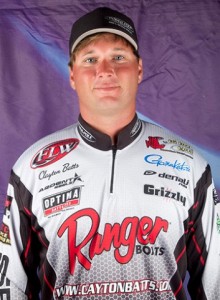 FLW Rookie Clayton Batts hails from Macon, Georgia in the heart of the Deep South. As such, Carolina rigging is very much a part of his arsenal. To Batts, one of the most effective ways to use a Carolina rig is as a mop up presentation when fishing for offshore fish that are grouped up. “When I’m ledge fishing and there’s a good school of them, they’ll often get fired up and bite just about anything for a few minutes maybe twice a day. I love to throw a Carolina rig at them after the school settles down, and it always coaxes a couple more bites, which is hugely important in major tournaments.”

Batts’ main priority in choosing a rod to Carolina rig with is that it have the length and backbone necessary to make long casts and set the hook in deep water. “I’m usually Carolina rigging in deeper water, and the 7’6″ Rosewood flipping stick gives me the leverage to set the hook if a fish bites at the end of a long cast.”

Since fish hooked Carolina rigging are often moving at you, Batts uses a high speed Ardent casting reel spooled with 16lb Gamma fluorocarbon for his main line. He then ties on a ¾ ounce tungsten weight, bead, and a two to three foot leader of 12lb Gamma fluorocarbon. At the business end, Batts likes the 6″ Big Bite Baits bush pig, because it provides a big target and lots of action to entice the big ones.

Rich Dalbey – 7’2″ H Kovert Series Worm and Jig Rod
Carolina rigging may have earned its moniker in the Tar Heel state, but it could just as easily be called “Rayburn rigging”, because of how popular and effective it is on the famed Texas impoundment. It should be no surprise then that FLW and Denali angler Rich Dalbey is an accomplished Carolina rigger; he lives in Greenview Texas less than three hours from the lake, nestled close to Lake Fork, which you also may have heard of before. 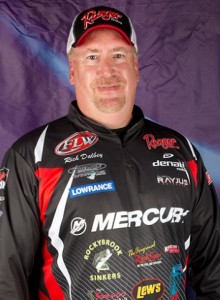 Since everything’s bigger in Texas, you might assume that Dalbey uses an eight foot flipping stick and piano wire to Carolina rig for the giants that swim in Texas lakes. Interestingly however, despite the large space dedicated to heavy tackle in Dalbey’s rod locker, he actually prefers the 7’2″ heavy action Kovert stick for most of his rigging because of its sensitivity. “I like the 7’2″ Kovert rod for Carolina rigging for a lot of reasons. It’s got good length to lob a long rig out there a ways, and can pick up enough line to bury the hook on every fish. The thing I really like about it though is its sensitivity. I spend a lot of time throwing a rig around deep grass lines, and the Kovert rod lets me know when I’m just ticking the edges of the grass. I don’t get that level of feel when rigging with a heavier rod.”

Dalbey’s Carolina rig setup starts with a high speed baitcasting reel spooled with 16 or 20 pound fluorocarbon. He usually uses a one ounce bullet sinker, a bead and then a two to three foot leader of 10 or 12 pound fluorocarbon. His favorite baits for Carolina rigging are flukes, brush hogs, and the Hag’s Tornado. When fishing a Carolina rig, Dalbey says “it’s important to really fish a Carolina rig slowly. A lot of guys fish it way too fast. You want to maintain bottom contact and really feel your way through the structure. Another thing is to not set the hook too fast. A lot of guys will jerk at the first bump, but the fish may be hitting the sinker so you’ll miss a lot of fish if you do that. I always wait till the rod starts to load up before doing a big sweep set.”

Charlie Evans – 7’8″ XH Kovert Series Flipping Stick
There’s a reason why former FLW president and recent inductee into the fresh water fishing hall of fame Charlie Evans is always smiling whenever he’s caught by the FLW cameras. It’s because when you’ve had a life in fishing like his, “every single day is a holiday”.

That sentiment is more than understandable when you consider his living situation. He has a home right on the shores of Kentucky Lake, one of the powerhouse destinations for bass tournaments and anglers across the country. A famed member of the Tennessee River fraternity, Kentucky Lake offers deep water structure anglers a buffet of offshore targets to feast on. “Living on Kentucky Lake is a blessing,” Evans says, continuing “I get to spend a great deal of time out there, and once the fish set up on their summertime structure, Carolina rigging becomes one of the best ways to catch them.” 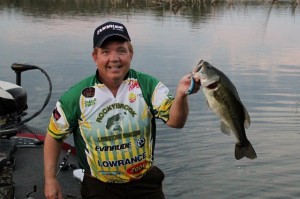 Like the other rods chosen in this section, the 7’8″ Kovert flipping stick that Evans uses has the length and backbone to launch the rig and handle big fish, but that’s only part of the reason Evans likes it for rigging, saying that weight and feel are equally important. “Carolina rigging can be a pretty fatiguing way to fish. Long casts, time spent dragging the bait all leads to fatigue. That Kovert rod is so light and easy to handle that I can concentrate harder and fish longer, which leads to more success. I also love the micro guides. They give you increased casting distance, which is really important when fishing big ledges like you find on Kentucky Lake.”

Like Batts and Dalbey, Evans also uses a high speed reel for his Carolina rig setup, in this case a 7.1:1 Lews BB1 Pro. Unlike the other two though, he uses 20lb Tuf-line Supercast, which is braid as his main line, to which he threads on a one ounce Rockybrook limestone sinker followed by a short leader of 12lb Vicious monofilament.

Evans likes the braid because it allows him cast even farther, and it’s no stretch characteristic amplifies feel so he can notice subtle changes in bottom composition. He also thinks the sinker is important, and has a ton of confidence in the limestone Rockybrook weight he uses, saying “The Rockybrook limestone sinker is a major part of my Carolina rigging success. It makes the loudest, most natural sound on the bottom, and it never gets stuck. Because of the size and shape, it won’t fall into little cracks in the bottom and get stuck like other sinkers. It also leaves a great mud plume and click that attracts fish from a long distance.”