HDS On Tour – Gary Klein Efficiency through Technology with Lowrance

Bassmaster Elite Series pro Gary Klein is all about precision. His career has been defined by knowing the details of each and every technique he is trying to learn. So dedicated is he to the details, that he will not add a fishing technique to his arsenal until he believes he has mastered it.

For example, Klein spent more than a year learning to master the drop shot rig before he employed the rig in tournament situations. After he felt fully comfortable with the rig, he and his partner Shaw Grigsby used it to win the ESPN Great Outdoor Games fishing competition on Folsom Lake in California in 2005.

His complete understanding of how bass relate to deep water structure has aided him in his career. However, his excellence combined with new technology has made him even deadlier on the water. One of those times was at the 2010 Bassmaster Postseason on Lake Jordan. Klein found two specific areas during his map study that he wanted to target. However, once he got on the water, his Lowrance HDS unit with Structure Scan helped him quickly pinpoint areas that he needed to target.

“Being efficient on the water is one of the most important things I try to focus on. The more efficient I am, the less time I spend searching, and the more time I spend with my line in the water. My HDS units with Structure Scan really helped me see exactly where on the breaks Jordan’s spotted bass would be holding.

I was fishing two outside breaks that held little sections of rock, rubble or stumps right on the edge of the break in 28 feet of water. What I typically would have to do is make long casts with a jig or some other bottom bait to find the isolated feature on the break that would hold bass. With my Structure Scan, I could make one pass down the break and find every little anomaly that would hold bass.

As Structure Scan painted the picture of the subtle differences in bottom composition, I could use my cursor and waypoint where each spot was, then line up to each one and make a cast to it with a shaky head, a drop shot or a jig. When my lure would come into contact with the cover, I could sense the difference in the bottom and know that a strike was soon to come.

What is really neat about the way the Lowrance units are networked together with an Ethernet cable and expansion ports, when I mark a waypoint while sitting in the driver’s seat, it registers on my front unit too. That way, when I stand up on the bow to fish, my bow mounted HDS unit helps me line up for the cast without having to mark another waypoint; which again, saves me time.

I figure that utilizing my Lowrance HDS Units with Structure Scan saved me at least two hours over the course of that tournament. Two hours is a lot on the water. It can mean as many as an extra 120 casts when I’m fishing slow, bottom bouncing lures like a jig or shaky head throughout a day.
One of the easiest things to do in fishing is to locate isolated cover on a bank that shallow water bass are holding on. While it’s not quite the same thing, my HDS Units with Structure Scan are like having an extra set of eyes under the water.”

Klein went on to weigh 23 pounds of Lake Jordan spotted bass and finish fifth in the tournament. 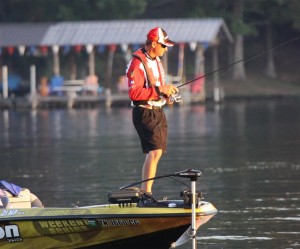