Living the Dream at an Elite Series Event

story and photos by Rob Lever 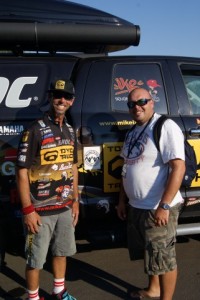 How many people can say that they are living the dream? Most would say becoming a professional athlete, reaching the pinnacle of your career, or becoming rich are good examples. Me, I can say that this last weekend I was able to live my dream, and have my family with me while I did it.

Over the last year, I have been lucky enough to run the website for The Bass University. This job has not only put me close to the sport I love, but also introduced me to the professionals that fish on both the FLW and B.A.S.S series. For me, this has been a constant learning experience. I have been able to pick the brain of almost all of my fishing idols, all while networking and making new friends in the business.

Last month I was asked to write a feature on the speakers at The Bass University for our web site. The motto of the University is to “Never Stop Learning”, and my assignment was to go to the last B.A.S.S Elite event and ask our speakers what they have learnedover the course of the year. After a couple of phone calls,and a little paper work, I was granted media access for the event.

With the event falling at the end of August, my wife and I thought this would be a great opportunity for us to bring our daughter up for a little family time. It just so happened that the same week of the tournament, the Great New York State Fair was going on right up the street from our hotel.

The month passed and it was finally time for the Lever family to take the six hour drive to Syracuse NY. The drive went smooth, and even included a short lunch stop at a rest area two hours away from our destination. At the rest area, my daughter was excited to see a carved statue of a bear welcoming her to New York. After enjoying our lunch, the Levers were back on the road.

Once we arrived at Oneida Shores (the home of the last Elite event) we immediately were able to see most of the competitors finishing their last day of practice. This is where we ran into one of the owners of The Bass University, Mike Iaconelli. You can tell that Iaconelli was having a hard day, but lit right up when my two-year old daughter ran up to see him. He also helped me out and let me put the decal for my non-profit on his truck. After a short photo session, Iaconelli drove away, a few spectators came up to us.

They all had questions that ranged from “how do I know him”, to “is he really that crazy?” This is when it started to hit me that I’m living the dream.
After a sleepless night I was back at the launch at 5:00AM. It was amazing to see the wrapped trucks launch boats with such ease. What seemed to be a well choreographed dance was actually a chaotic scene as Pros and Marshalls were all trying to find each other in a timely manner. I was in such a trance watching the launch that I almost forgot to go to the beach area. That is the area that is designated for both blast off and check in. This is where I could have my chance to ask the BU speakers the question I had came to ask. 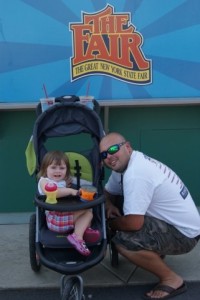 I arrived at the dock to find a sea of spectators. Camera in hand, I started snapping picture after picture from the beach. As I walked up on the dock to start my interviews, someone asked to see my credentials. The look on my face must have been priceless as realized that I had the credential and it was around my neck.

It was now time for the tournament to start. B.A.S.S. emcee Dave Mercer started to announce each Pro as they came up and grabbed their boat number and took off. I looked around to see who was around me. There was a virtual all star team of Journalists. To my left was Don Barone, or DB as we know him. Barone is a world class writer who has covered virtually every major sport. He once told me that he didn’t cover the sport, rather he covered the personalities in the sport. Taking pictures of the boats was James Overstreet. He is an accomplish photographer who covers every major event for B.A.S.S. I couldn’t help but to think how crazy it was that I was covering the same event with these two guys that I look up to.

The launch ended and I went back to the hotel to pick up my family. We spent the day at the NY state fair. I was excited because this would be the first time I could bring my daughter to the circus. The three of us sat there in amazement as each act started and finished. After the circus, we grabbed lunch and made our way back to the weigh in.

The weigh in started and so started a crazy couple days. I put my media badge on and started taking pictures of each of the BU speakers and asked each what they had learned. My confidence started to build with each interview. Most of the speakers knew who I was and a few even asked how my daughter was. The fan in me was pushed aside and I started to see the human side of the sport.

Families of pros ran in and you started to see the whole picture. These are just normal guys making a living for their family. They were living the dream with their family. 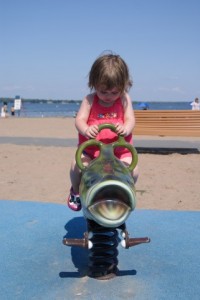 The next day added a new aspect of my time covering the event. I was given full access to a media boat. My driver drove me to all parts of Oneida Lake. Most of our time was spent watching the day one leader of the tournament. It worked out that the day one leader was non other than Mike Iaconelli. We were 1 out of 14 boats following Iaconalli in that one spot. The driver of the boat asked who I worked for and what I was doing. I was amazed when he said how cool it was, and how much he idolized the guys I work with at the University.

The weigh in that day was amazing. B.A.S.S was very accommodating and was a pleasure to work with. Jerry McKinnis (one of the owners of B.A.S.S.) as well as James Hall (editor of Bassmaster Magazine) came over to introduce themselves. This showed me that people respected me, and that my first experience as a media member was a success. The most amazing part of this whole experience was that I got to share this with my family. As I was interviewing people, I could see my wife chasing my daughter around the playground. After my final weigh was over I walked over to my daughter. She was sitting on a sea horse that looked like a largemouth bass. This turned into the most important interview of the week. I asked if she had fun. “YES!” Do you want to grab dinner? “FRENCH FRIES!”
I’m just living the dream!