The Elite Series season is over, and while I would say it was a good year; I didnâ€™t accomplish my goal of making it to the Classic from the Elite Series.

I cashed checks in five of the eight tournaments this year; which is pretty good, but missing those three of those checks probably cost me the Classic. I finished 45th in the points, and even finishing those events with the last check would have probably moved me well into Classic qualifying range.

Despite all of that; having Amy and T.J. with me on the road has been really cool. Amy has made some great friends with the women on tour, and it was great to have them here and see them every day. 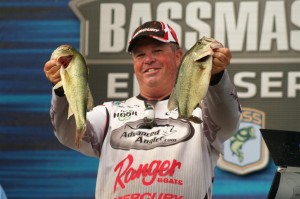 I almost missed the cut at Wheeler too. I had a tough first day and only weighed 9 pounds; but, I found a school late on the second day and came in with 13-7 for my day two limit. My total weight of 22-7 ended up putting me in a four way tie for 48th place.

When we looked at the standings, it showed me in 51st place; one place out of the money by an ounce. I was so frustrated to miss a check by an ounce; I couldnâ€™t believe it. I left to go load my boat on the trailer, when Trip Weldon; our tournament director told me that the tie breakers worked out that I was fishing.

I talked to Mark Menendez; the guy I was tied with and he said he had burned up his fish, but I had just found mine. I ended up catching another 13-7 and moved up into 21st place.

I caught my fish by throwing a crankbait, a jig and a dropshot. I threw the crankbait on a Powell Endurance 804cb cranking rod with an Ardent XS1000 in 5.1:1 retrieve. I threw the jig on a Powel 765cb with the same Ardent reel in 6.3:1 retrieve and the dropshot was the Powell Endurance 714mhef spinning rod, an Ardent S2500 spinning reel on 8-pound fluorocarbon, with a 6â€ Roboworm on an offset shank hook and a 1/4-ounce River2Sea Tungsten Tear Drop Weight.

The crankbait was used when the fish were active, and the jig was when the crankbait kind of died down. I used the dropshot rig when they were really inactive and had kind of slid down off the side of the underwater point I was fishing.

Now Iâ€™m on to Table Rock Lake and the second PAA tournament of the year, then Iâ€™ll get ready for a run of tournaments that will include the rest of the PAA schedule, the U.S. Open back on Lake Mead, a team championship on Lake Mead and the Bassmaster Northern Opens.

It will be busy, but weâ€™re going to kind of make a base at Amyâ€™s family home in Illinois and work from there as a hub. Iâ€™m tired, and ready for a few days off, but weâ€™ll get a couple after Table Rock.