Dynamic Blog – KVD Cranks Up No. 7 by Alan McGuckin – Dynamic

Skies turned dark and winds picked up minutes before weigh-in began at the final regular season Bassmaster Elite Series tournament being held on Lake Wheeler. Photographers took cover to keep their cameras from getting wet, and fans kept an eye on the sky. Fortunately, the rains never really soaked Ingalls Harbor — and nothing got blown away — until Kevin VanDam rolled in. 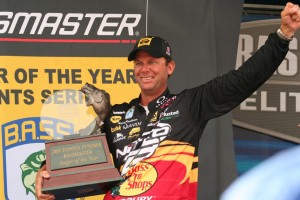 As always, VanDam was as equally gracious on the weigh-in stage as he is tenacious on the water. First, he thanked Toyota, the title sponsor of the Bassmaster Angler of the Year title. â€œMan what a day. I love competing against these guys, and I really have to thank Toyota. Itâ€™s by far the best tow vehicle Iâ€™ve ever driven. I never have to take it into the shop for repairs, and I know half the guys out here on tour drive one, and they never have problems either,â€ said VanDam.

â€œI love the competition. It drives me, and I think I drive them. Iâ€™ve had a magical week without a doubt. For me, I wanna go out there every day and perform my best, but Iâ€™m tellinâ€™ yaâ€™, I had some practice days this year that really didnâ€™t go that well. I was real glad to finish some of these events in the 20s, considering how tough practice was,â€ reflected a humble VanDam.

Does VanDamâ€™s dominance ever get old? â€œOnce youâ€™ve won a Classic, or even a regular season event, nothing satisfies you until you do it again.â€ For VanDam, heâ€™s now done it seven times. Thankfully, heâ€™s done it with class and grace, while repeatedly taking professional bass fishing by storm.