On the Ledge with Terry Scroggins 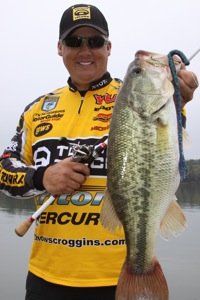 Summertime is here in many areas of the country.  Bass have all but finished their spawning cycle and have made their move to main lake structure; or they are well on their way.

In many areas of the country one of the best places to catch bass consistently is an offshore ledge.  For simplicity, the most common ledges are basically the edge of the main river channel on the main lake.  Lakes like Guntersville, Kentucky Lake, Pickwick, and several others on the Tennessee River system are known for their ledge fishing.

However, not all ledges are equal.  Each of them has what anglers refer to a s “sweet spots;” these are shellbeds, rockpiles, isolated stumps of bare spots in the grass that bass hold on and school up to feed on.

For the past several years; the sport’s anglers have put on clinics of ledge fishing.  Some of the most memorable have been the big weight duels of the Bassmaster Elite Series on some of the bodies of water mentioned above.

Locating the right spots on a ledge can be a daunting undertaking.  Ledges can stretch on for miles along the main lake river channel, and the best spots on them might be as small as the size of the hood of a Toyota Tundra.

Elie Series pro Terry “Big Show” Scroggins of San Mateo, Fla.  was not completely familiar with fishing ledges until he joined the national tours.  But, being the versatile angler he is; he quickly developed a system for locating the sweet spots on ledges. 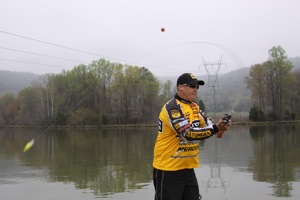 “Fishing offshore ledges is the best way to catch a bunch of high quality fish in the warmer seasons,” said Scroggins.  “I use a combination of my electronics and a couple of techniques to find the sweet spots; then try to focus on a couple of different lures to catch them once I’ve located them.”

Underwater Eyes
Scroggins said that the first thing he does in practice is to move as quickly as he can down the ledge using the Side Imaging on his Humminbird 1198.  “The Side Imaging helps me to see stuff on the ledge more quickly,” said Scroggins.  “I can mark them from where I am by moving the cursor to it and come back later to fish that cover.”

After he uses the electronic eye mounted on the console of his Triton, Scroggins turns to his deepwater probe.  He prefers to use a technique that allows him to feel the bottom, can cover water quickly, but will still generate a few bites.  “I start with a Carolina Rig for searching them out,” he said.  “The heavy weight tells me when I’m in contact with a hard bottom, and will still get a lot of bites.”

Look For Something Different
To help anglers find the best spots on a ledge, Scroggins said that that they need to key on finding something different.  Even with a ledge that features a hard bottom all the way along its edge, he said that finding the spot that the bottom goes from hard, to hard and rough; that’s the area he targets first. 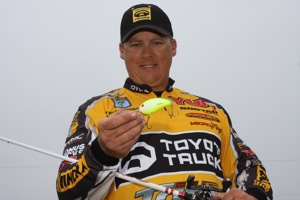 The other thing he looks for is a turn in the channel bend.   “It’s kind of like a roadbed,” he said “Anywhere the ledge makes a bend that creates a difference in the bottom; the bass will be there.”

Game Day Approach
Once he has located the sweet spots he is going to fish, Scroggins puts down the Carolina Rig because he feels in most instances it does not generate the overall quality of bites he is looking for.  His choice is to go with a one-two punch that relies primarily on a crankbait, but holds big worms as a backup plan.

“My number one choice is to go to a Bomber Fat Free Shad BDS7 crankbait,” Scroggins said.  “I think the crankbait catches the biggest fish in the school quickly, and I can turn to the big worm after, or when the conditions won’t suit the crankbait.”

He favors only a few colors in the crankbait for ledge fishing; Citrus Sparkle, Foxy Shad, Pearl White and Tennessee Shad.  He said it is important to make the lure deflect off the bottom cover to trigger strikes.  He does that by making long casts with a 7’3” medium-heavy action Duckett Fishing Micro Magic casting rod, a Lew’s Tournament Pro Speed Spool casting reel in 5.4:1 retrieve speed and 10 to 12-pound-test Hi-Seas 100% Fluorocarbon line.

While he favors the crankbait Scroggins was quick to point out that the big worm will also catch big fish; although not likely in the numbers of the plug.  He caught his personal best tournament stringer at Falcon Lake in an Elite Series tournament by using two big worms, but also said that the water was 22 feet deep, and he couldn’t get his crankbaits deep enough there. 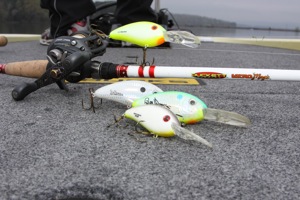 “I use the worm when the bite slows down on the crankbait or they stop generating current through the dams and I can’t make them eat a fast moving lure,” he said.  “I use either a 10-inch YUM  Ribbon Tail, or my 10-inch YUM Big Show Paddle Tail Worm.”
The worm choice is dictated by how the fish are responding to the worm.  If he needs to cover water a little to trigger strikes, he opts for the Ribbon Tail, but if he needs to let the worm stay in one spot and shake it next to isolated targets, he turns to the Big Show Paddle Tail.

He also suggested that anglers use sinkers that allow them to feel the bottom, and current or wind can dictate the size.  Scroggins typically uses 5/16 to 3/8-ounce sizes depending on the conditions.

Closing
Scroggins feels that learning to fish ledges offshore is a must if an angler wants to be competitive in this day and age.  He said that anglers need to get comfortable with a few things in order to be successful.  “Make sure to use your electronics to find and keep you on the spot,” he said.  “I don’t even use marker buoys anymore; my electronics help me stay on the spot.”

He also said that it is important to know where your bait is.  “Some of these spots might be really small, and knowing where your cast needs to be made, and how to keep your bait in the sweet spot is key to getting the most bites.”