A Father’s Day – with James Niggemeyer

The life of a professional tournament angler is a hectic one. 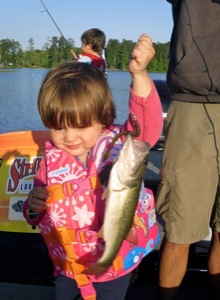 Take for instance the Bassmaster Elite Series schedule for 2011.  What started in Florida in the middle of March has just completed this past weekend on Alabama’s Wheeler Lake in Decatur.  To do the math, that’s eight tournaments in a three month period.

That may not seem like much, but when you consider the fact that in the span of twelve weeks, the 99 pros that make up the Elite Series field have spent eight weeks of their lives practicing or competing.  For most of the field that means 24 dawn to dusk practice days and 16 to 32 high stress days of competition.

It also means that in order to do their jobs on the water these anglers paid more than $41,000 in entry fees and another $16,000 in expenses.  That correlates to spending nearly $60,000 in order to go to work for half of the year.

The FLW Tour is no different.  The more than 150 anglers that have competed on the FLW Tour Majors and FLW Tour Opens field have also spent seven weeks of their lives on the road, and with three practice days and the minimum number of two competition days; that equates to more than a month of heavy stress angling.

The expense for the FLW Tour pro is similar, with $35,000 in entry fees thus far and another $14,000 in expenses; with three more tournaments ahead, the work related expenses can exceed $70,000.
Combine that with the fact that many of these anglers also fish the PAA Series, Bassmaster Opens and Everstart Series and fishing can become a job.

For Bassmaster Elite Series pro James Niggemeyer, the best way to be reminded of his love for the sport of fishing is to spend “a father’s day” on the water with his kids Daniel and Abigail.

“I really am a fishing junkie,” said Niggemeyer.  “I love to fish, and I have since I was a kid; so I try to do it as much as I can; even when I’m not competing.”  What that means to the fifth year Elite Series pro is that he tends to fish a lot at home in Van, Tex. ; whether on a small community lake in Tyler, the famed Lake Fork, or the farm ponds in and around his house.

His young son Daniel; now nearly six years old, has been a tag along on many of his outings for several years now.  Niggemeyer said that originally, the outings may have been designed to cajole him into taking his son out of the house so his wife Sandy could get a little time away from the toddler; but they turned into special times. 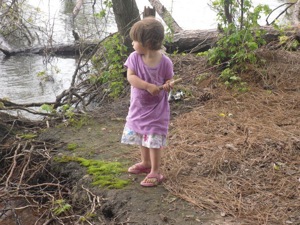 “We started with bobbers and red worms early on,” he said.  “I would cast it out and let it sit there at the pond near Sandy’s parents’ house; then I would take the time to practice with a new lure, or just fish hard myself.”  It was during those times that he became comfortable with the potential of sponsor products like Strike King’s Red Eye Shad or a new St. Croix Rod, new Sunline products or a new reel from Ardent.

However much work he was able to get done, Niggemeyer said that he learned early on that having a youngster around on his fishing outing meant remaining flexible.  “I had to learn that sometimes a fishing outing was going to involve throwing rocks, catching minnows and crawdads and chasing bugs,” he said.  “Daniel is all boy, and learning to love God’s Great Outdoors means partaking in all of it.”
The pair soon graduated to outings on Niggemeyer’s Bass Cat; sometimes in the fall and winter months near the dam at Lake Fork in search of crappie.  “We would try minnows and mini jigs down there and do okay,” he said.  “Those outing wouldn’t last too long because it was cold and wet; so we would keep them brief.”

Daniel also loved fishing for trout at Mammoth Lakes during a family trip to California; where Niggemeyer is originally from.  Niggemeyer said that they would bait the hook and cast it out and Daniel would play while they waited for the rod tip to wiggle.  “When he’d get a bite, I would yell for him and he’d come running,” said the three-time B.A.S.S. winner.  “He’d reel in that trout and we’d teach him to clean it, and we’d eat it later for supper; he loved the taste of rainbow trout.” 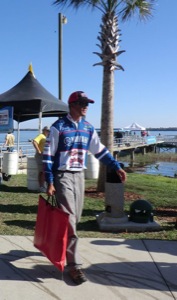 While the early outings seemed to be mainly a way for Daniel to tag along with his dad; the elder Niggemeyer soon realized that his son was developing a real love for fishing.  He has since learned that he loves to fish a white mini jig.  “I stick to my white mini jig with a little spinner on the bottom,” said the five year-old Daniel Niggemeyer.  “I really like fishing for bluegill best; especially in my Grandma’s pond.  My dad casts it out for me, and my favorite part is reeling them in.”

As his love of fishing has progressed, Niggemeyer decided that the time was right for him to enter a fundraising tournament with his son.  The perfect choice was the Michelle Short Memorial tournament held on Lake Dardanelle in Arkansas at the end of May.

Put on by his Elite Series Colleague Kevin Short and his wife Kerry in honor of their daughter.  The tournament is a memorial scholarship fundraiser for the University of Central Arkansas softball team; where their daughter attended before she passed away.

The event includes a bass fishing tournament and a rubber duck hunt that have prizes written on them, and with the laid back atmosphere; it proved to be a perfect environment to introduce his son to tournament fishing.  “It was really hot that day, but he stayed casting with me most of the day until around 1:00 in the afternoon,” Niggemeyer said.  “We took a couple of rests to drive around a hunt for rubber ducks, but he was a real trooper.”

After taking his “partner” back to the dock where he was greeted by his wife Sandy for a break before weigh-in. Niggemeyer returned to the water where he boated one more keeper for the team.  “We only weighed in three fish that day, but Daniel seemed to enjoy it,” he said.  “Kevin (Short) interviewed Daniel, and wouldn’t let me talk on the mic on stage.  He was a little shy, but he told the story alright.”

Niggemeyer said that he figured his son enjoyed it because as he was leaving to go fish his next Elite Series event on the Arkansas River; Daniel asked him if he could fish this tournament with his dad too. 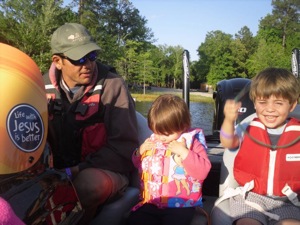 Now that Niggemeyer’s daughter Abigail is becoming more self-sufficient, he is beginning to introduce her to the sport as well.  “I think we’re especially excited about Daniel loving to fish is because fishing really kept me out of trouble when I was younger,” he said about his Southern California days.  “My friends would be going to parties, and I wouldn’t because I was going fishing early the next morning; it helped keep me focused when I could have gone the other way.”

Whether or not his son or daughter chooses to follow in his footsteps is not the focus; for now, the joy is merely in spending “a father’s day” with his children.  “God has blessed me with a family that I cherish and love sharing things with,” said Niggemeyer.  “He also blessed me with a career in a sport I love, and I get to share that with my children; it is truly a joyful thing for me.”

For Daniel; he too said that fishing is something he loves, and after watching Swamp People and Bear Grylls Man vs. Wild on Netflix; he loves fishing with his dad.  “It’s my third favorite thing to do,” he said while his dad chuckled in the background.  “I wish I could go fishing with my dad every day.”