In much the same way that geese and ducks are intuitively called north each autumn, yesterday, top pros Tommy Biffle and Greg Hackney were instinctually called from Lake Wheelerâ€™s deep-water structure to the shallow waters where both feel most at home.

The flight path toward the shoreline landed both Quantum pros near the top of the leaderboard, and Greg Hackney explained success came fast once he touched down. â€œItâ€™s a place about the length of three bass boats, and when I pulled up there yesterday I caught eight keepers in 45 minutes. My smallest was 2 Â½-pounds, and by the time I was done culling, my best five weighed 19-pounds,â€ said Hackney, as he reached for a Smoke rod and reel combo equipped with 20-pound Cajun fluorocarbon line. 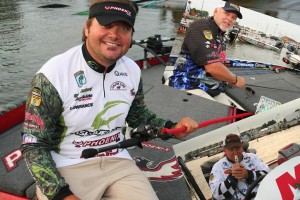 â€œThe cool thing was, I caught them in the most fun way possible â€“ shallow â€“ and I could visibly watch them bite. I had 30 boats nearby, but I did my best to hide. Iâ€™ll start their first today, Iâ€™ve probably already caught most of the big ones from that spot, but thereâ€™s a good chance thereâ€™s still at least a couple good fish there. No matter what happens today, I pretty much wrapped-up a spot in the Bassmaster Classic with that 19-pound limit yesterday,â€ said Hackney, who sits in second place.

Tommy Biffle tried hard to avoid his instincts, but a dismal 9-pound limit on the first day of the tournament forced him â€˜homeâ€™ to water no deeper than his waist. â€œI knew coming into this tournament that you could catch a few fish shallow, but I didnâ€™t think you could win here this week fishing shallow,â€ said Biffle, who won the Bassmaster Elite here at Lake Wheeler in early April two years ago.

â€œI havenâ€™t even been near that spot where I won. Between local fishing pressure thatâ€™s rolled in there since I won, and the fact that the water is probably 95-degrees in there, I didnâ€™t see any point in fishing it,â€ added Biffle. â€œThe spot I caught that 17-pound limit from yesterday is no bigger than this Ranger boat of mine, and itâ€™s not three feet deep. I put my Power-Poles down and caught two big ones on back-to-back pitches,â€ added Biffle, who vaulted up to 13th place when the scales stopped spinning yesterday.

While Hackney and Biffle were called shallow, comically good-natured veteran pro Kenyon Hill was calling geese before morning blast-off. Thatâ€™s right; Hill had a lanyard full of calls tucked beneath the console of his Triton before take-off, and honked on them as his ride-along Marshall walked down the dock. â€œBy coincidence, I drew the same guy yesterday as my Marshall. We got to talking duck hunting, and I figured today weâ€™d play a little show and tell,â€ grinned Hill, who started duck hunting in cold and leaky waders as a teenager around Buncombe Creek on Lake Texoma.

â€œIâ€™m no world champion caller. I hunt 15 days a year, mainly in Oklahoma and Kansas, but I canâ€™t wait to pick up my dog Addie from Washita Retrievers in Marlow, Oklahoma when I get home from Wheeler,â€ said the 46-year old Hill. â€œAddieâ€™s being trained to be a hunting dog â€¦ and my best friend,â€ he smiled, before blowing one time on a Zink Money Maker goose call.

â€œDonâ€™t think for a minute, that I wonâ€™t stop fishing today and honk at a â€˜sky carpâ€™, a.k.a. goose, if one flies over. Heck, yesterday, I stopped bass fishing and hammered the white bass when they started schooling near us,â€ said Hill, who like Biffle and Hackney, proves you can indeed be successful and qualify for multiple Bassmaster Classics as long as youâ€™re willing to follow your instincts and seek fun along your flight path.