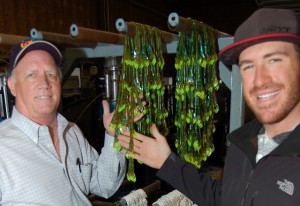 TULSA, Okla. (Jan. 7, 2015) – Gene Larew Lures announces the addition of bass professional Jacob Wheeler to its pro staff, bringing together one of the oldest names in soft-plastic lures with one of the youngest million-dollar earners along the top tournament trails.

“Jacob has a lot of reasons to be sporting that grin of his that’s as big as the flat bill on his cap; he’s had an amazing start to his career,” said Larew owner Chris Lindenberg. “While we of course like what we see in his fishing skills, I can honestly say that we like even more the-Jacob-Wheeler person we’ve come to know better in recent months.

“He’s a humble young man that is quick to credit his success to life-lessons learned from a hardworking family that struggled to make it through tough times, and who’s been giving back ever since to his loving parents who taught him to fish. His first personal ‘splurging’ after the $100,000 All-American win, was his buying himself two pairs of Nike tennis shoes instead of just the one he needed.”

The Indianapolis angler said he believes it’s his strong family culture that led him to Larew. “As a bass fishing fanatic, I knew about Larew, and of course the brand’s relationship with legendary angler Tommy Biffle, but I didn’t know the folks behind the company name,” Wheeler explained.

“When Upshaw (fellow FLW pro angler Andrew Upshaw) introduced me to Chris and his team at ICAST last summer, I felt right at home. Larew is a great fit for me and my fishing style.”

As a result of the partnership agreement, Larew branding will have a prominent place on Wheeler’s hat, jersey and boat wrap.

Wheeler visited the Larew manufacturing facility in Tulsa, Okla., last month to sign the deal. He took advantage of the trip to further supplement his Larew soft-plastic assortment that will be going with him to the 2015 Bassmaster Classic, to be held on South Carolina’s Lake Hartwell in February.

“Larew has a history of great products, but what they have introduced through innovation in recent years is proof that these guys really ‘get it.’ As a result, I’m expecting great things to continue to come and a shared success throughout my 2015 season and beyond,” Wheeler said.

“We have a great pro staff and Jacob is a solid and proud addition to our team. Every one of these guys can catch ’em and is a threat to win any given event. What scares me most is that they all are also practical jokesters. Keep an eye on these guys in 2015,” Lindenberg added.

For more information on Larew products and pros, visit www.GeneLarewLures.com.