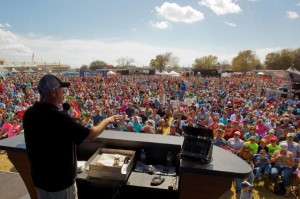 ORANGE, Texas — So many fans of the Bassmaster Elite Series turned out in Orange, Texas, for the March 14-17 Sabine River Challenge presented by STARK Cultural Venues, attendance records were not only broken, they were smashed.

Over four days, 33,650 people came to the season opener of the Elite Series, beating the previous four-day record by 15,730, B.A.S.S. announced today.

The broken high mark of 17,920 was set in 2011 at the Bassmaster Elite Series Dixie Duel in Decatur, Ala.

“This is the biggest thing we’ve ever had in our community,” said Ida Schossow, president of the Greater Orange Area Chamber of Commerce, the event’s local sponsor. “The size of the crowds was far above that of any event we’ve had — and we’ve had quite a few. We’re very excited.”

Bruce Akin, CEO of B.A.S.S., which owns the Elite Series, applauded the efforts of the Greater Orange Area Chamber of Commerce, the STARK Cultural Venues and other partners to make the Sabine River Challenge a record-setter.

“We can’t say enough about how the chamber and the Stark Foundation got behind this event and worked to make it such a great success,” Akin said. “We deeply appreciate the hospitality shown to us, not only by members of the chamber and its partner organizations, but also by business owners and individuals of the community. We were welcomed with open arms.”

Schossow said that a pre-event study pegged the economic impact of an Elite Series tournament in Orange at $1.4 million. She expects a post-event analysis will show an even greater return.

Promotion and advertising helped bring in the crowds, but one factor that boosted attendance was the attraction that a pro-level bass tournament has for people who live in and around Orange, she pointed out. People in southeastern Texas love the outdoors.

“I would say that 75 to 80 percent of residents hunt and fish,” Schossow said. “Anytime you come out, you’ll see our rivers full of boats.”

Fans arrived before dawn each day at the City of Orange Boat Ramp and Park on the Sabine River to watch as many as 100 Elite Series pros launch their boats and begin the day’s competition. Many fans remained at the park for demo boat rides provided by Elite sponsors Yamaha, Mercury, Nitro, Triton and Skeeter.

Early afternoon attractions included the Bassmaster Elite Series sponsor exhibits, a carnival, food vendors and live music. By 3:15, a sea of fans assembled in front of the Bassmaster stage to watch the pros weigh their daily catches.

Saturday night after the weigh-in, fans stuck around for a free concert by country singer Neal McCoy and fireworks presented by local sponsors.

Schossow said that since the Elite Series came to town, she’s been getting nothing but positive feedback from the Orange community.

“It is the buzz around town that we want Bassmaster back,” she said. “I can’t tell you how many times people have walked up to me and asked, ‘Are we getting this back, are we getting this back?’ We at the chamber want that, and our whole community wants to see the Elite Series return. STARK Cultural Venues, the title sponsor, is so excited and happy, and they want it back as well.”

The success of the event was topped off with a win by native son Todd Faircloth. From nearby Jasper, Texas, Faircloth weighed 49 pounds, 6 ounces of bass in four days to claim the first prize of $100,000 and an instant entry in the 2014 Bassmaster Classic. Complete coverage, including photos of the huge crowds, is available at Bassmaster.com.

The Bassmaster brand and its multimedia platforms are guided by a mission to serve all fishing fans. Through its industry-leading publications — Bassmaster Magazine and B.A.S.S. Times — comprehensive website Bassmaster.com and ESPN2 and Outdoor Channel television programming, Bassmaster provides rich, leading-edge content true to the lifestyle.

B.A.S.S. offers an array of services to its more than 500,000 members and remains focused on issues related to conservation and water access. The organization is headquartered in Birmingham, Ala.