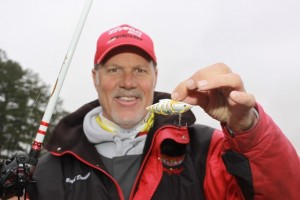 “When it gets cold in the winter, you have to fish extra slow.”

How many times have we all heard that statement when discussing cold weather fishing? I’m guessing we have all heard it said at least a hundred times in the last two winters. While there are times that an angler is forced to slow down and use a shaky head worm, a dropshot or a jig slowly scraped along the bottom this time of the year; the truth is, that isn’t always the only way to catch bass.

Boyd Duckett, the 2007 Bassmaster Classic Champion, co-founder of Major League Fishing and winner of three other B.A.S.S. events likes to give himself the option of covering water in cold weather. Instead of focusing on specific presentations with slow moving lures, Duckett goes another route.

“I like to use a Rat-L-Trap a lot in the fall through winter,” said Duckett. “It’s not a burning bank approach like in the spring, it requires a little more finesse, but it still allows me to move around and cover water more.” 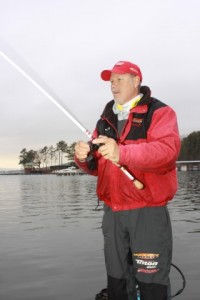 Boyd Duckett Fishing the Rat-L-Trap on a cold Lake Guntersville. Notice the Tip Up Position of the Rod – photo by Dan O’Sullivan

In the earlier winter, Duckett concentrates on finding a combination of cover and structure. He looks for the drains leading in and out of feeding flats that have grass in them. However, he doesn’t fish miles and miles of bank searching for them visually. Instead, he tunes the mapping on his Humminbird locators to help him see them on the screen while he is driving the lake.

“I set my Shaded Depth feature to 10 ft, because that’s about where the grass edges will stop around the South,” he said. “That really highlights where the drains run in the flats, and helps me see where the drain and the grass will likely come together.” he said bass will suspend on the clumps of grass at the edge of the full grass lines.”

After the grass has died off in the later winter, Duckett then starts turning his attention to the saddles that run between bottom features. “If you look at a map, you will see where a point runs out to deep water and drops off, then begins to rise again as it goes out to an offshore hump; that area in between is a saddle,” said Duckett. “They will get in the bottom of that saddle and sit there with their bellies on the bottom in cold water when there is no grass.”

What Baits?
Duckett said that he has long been a fan of the Rat-L-Trap. He said that he has tried many, if not all of the other lipless crankbaits on the market, but said the Rat-L-Trap provides him the sound, and action he needs. “First of all, there is the Rat-L-Trap sound, it is still the best,” he said. “Plus, you don’t have to move a Rat-L-Trap nearly as fast as other baits to make it vibrate n the retrieve; which is key in cold water.”

Duckett opts for shad colors in the fall and winter because bass tend to feed up on the shad population that migrate in the fall, then start to die off as the water becomes cold. As the grass dies off, and grow in again in the spring, he’ll turn to crawdad patterns. He uses the 1/2-ounce version the most, but will upsize to the 3/4-ounce if he is around bigger fish, and downsize to the 1/4-ounce if the baitfish are smaller.

Like a Jig
While most anglers make long casts and straight retrieves with a Rat-L-Trap all year, Duckett said that is unlikely to produce numbers of strikes in cold water. “I try to think of using the Rat-L-Trap more like a jig than I would a crankbait this time of the year,” he said. I’ll make casts into the grass and subtly pull it towards me with a similar rod tip action to fishing a football jig or big worm on the bottom.”

His objective is to pull the lure through the tops of the grass subtly, with just enough speed to feel the lure vibrate on the pull. “A fantastic way to fish a Rat-L-Trap in the spring is to cast it out, reel it quickly, and rip it free from the grass, but that doesn’t work in cold water,” he said. “I pull it into grass clumps by lifting the rod to make the rod tip pulse slightly. When I run into the grass, I try to finesse it out so that it doesn’t burst free, and then let it fall, but maintain a semi-taut line so that I can feel the bait falling; that’s when strikes usually occur.”

He employs a similar retrieve when working the saddles offshore, but he does not have grass to contend with, so he slowly lifts the lure and lets it fall to mimic a dying shad. 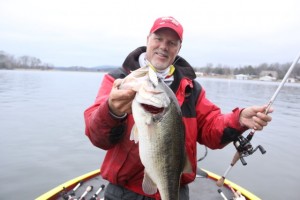 Rat-L-Trap Gear
The retrieve he employs is what dictates the kind of gear he chooses. Many anglers view Rat-L-Traps as reaction baits that require a softer rod for hooking and landing fish, Duckett thinks the cold water changes things. “I use a 7′ medium-heavy Micro Magic Pro rod, a Duckett Fishing 360R reel with a 6.3:1 retrieve speed,” said Duckett. “I spool the reel with 12 to 14-pound-test Vicious Pro Elite Fluorocarbon so that I can feel the bait, and have maximum control over it too.”

He needs the stouter rod to work the bait free from the grass without overpowering the lure.

The Wrap
“I’ve had trust in a Rat-L-Trap’s ability to produce both numbers of strikes and big bites for as long as I’ve been fishing,” said Duckett. “Anglers just need to experiment with the depth zones and retrieves to make the fish respond.

“But, if they sincerely give it a try, I know they will find out that it’s not just a springtime lure,” he said. “It really does work year ’round.”