Certainly, there are parallels between professional bass fishing and NASCAR. This week at the Bassmaster Elite Series event on the Arkansas River brings to light many comparisons between the two sports of deep Southern roots — including the race to gain an advantage while using essentially the same equipment.

There have been daily, long, hot, grinding races down the river, with lock and dams serving as a pit stop, and anglers stomping the throttle when the gates open to see who can get to the best stuff first. Thereâ€™s been controversy between â€˜driversâ€™ and talk of one brand of boats being faster than all others, along with conversations of â€œsucking the paint off of so and soâ€™s boat as I blew past him.â€ 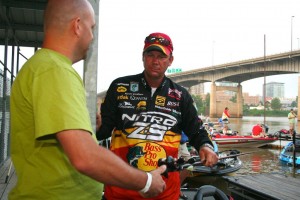 But bass fishingâ€™s version of restrictor plate racing this week has come in the form of sqaurebill crankbaits. Everybody has got one, their presence is boldly obvious, and in a sense, theyâ€™ve served to erase any advantage that might otherwise exist with the help of some sort of secret lure. In fact, Kevin VanDam had six nearly identical cranking combos lying on the front deck prior to blast-off on the final day of competition –four of his six featured a squarebill.

What was not as obvious as the four nearly identical lures VanDam had tied on was the one stealthy new black reel lying on the starboard rod locker. But with fans able to get up close and personal with the pros, much like they filter through the garages and pits at Talladega and Daytona, 36-year old Elite Series fan John Davidson stood 10-feet from KVD, spotted the one peculiar baitcaster, and quizzed Kevin about it.

VanDam graciously told Davidson, who has traveled from his home in Meridian, Mississippi to every Elite event but two this year, that it was a brand new, lighter version of his favorite 5.3:1 Quantum crankbait reel they are calling the Tour KVD Cranking Classic. KVD then encouraged Davidson, who builds airplanes for Lockheed Martin for a living, to feel the featherlike baitcaster for himself.

Just behind Davidson and VanDam, more show and tell was taking place around Gerald Swindle, who amid all his humor, has been on an upward run through the points race chase the past few weeks. Swindle had one spinning reel combo with a shaky head tied to it, along with one topwater, and of course â€¦ five â€¦ yes five â€¦ squarebill crankbait combos. The G-Man joked with nearby fans, â€œFellas, do you think I might just plan to catch â€˜em on a squarebill today? I mean itâ€™s not obvious or anything is it?â€

With a total 11 crankbait combos tied on between the two anglers, VanDam and Swindle accepted well wishes from fans, pushed away from the dock, stood for the National Anthem, and started their engines for yet another long race down the Arkansas.