The grinding Bassmaster Elite Series event on the Arkansas River is proving to be a great test. A test of physical endurance in sweltering mid-90 degree air temperatures. A test of mental toughness. A test in personal perseverance. And for one well-liked rookie, a test of character.

Klein stood practice casting and tuning a crankbait around the docks stationed inside the morning blast-off harbor, explaining when they bite, heâ€™s often out of perfect hook-setting position when casting around the docks the bass are suspended under. In turn, he fails to get a solid hook set. 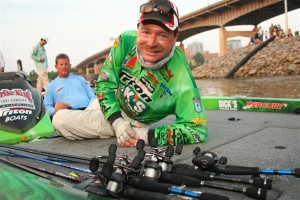 â€œItâ€™s been as tough as I expected, but if Iâ€™d have caught every thing Iâ€™ve lost, Iâ€™d be in the Top 12 of the standings, I should have 22 to 24-pounds so far.â€ Instead Klein has 14-pounds and sits in 35th place. â€œItâ€™s not my equipmentâ€™s fault. My hooks are sharp, Iâ€™ve got the right rod, and my Smoke reels work freakinâ€™ great, itâ€™s just that bad casting angles are subject to getting you caught in a bad situation because youâ€™re out of position,â€ concluded Klein.

Humility flows frequently through professional bass fishing, and unfortunately the nicest guy on tour, Shaw Grigsby, got caught up in its humble currents yesterday.

After catching a very respectable 13-pound limit on the first day of competition, Grigsby sat smiling from beneath his mustache in 5th place. But then came humility floating down the Arkansas. â€œYesterday, I stayed in the pool weâ€™re launching in, just like I did the first day. It wasnâ€™t a lock and dam issue for me. Itâ€™s just that the first day I caught 13-pounds here, and itâ€™s pretty apparent those keepers donâ€™t replenish around here, because yesterday I caught 15 fish and not a single one of them was a legal keeper,â€ said Grigsby, forced to take a zero for the day.

While green fish were the cause of Grigsbyâ€™s humility, for popular rookie Brandon Palaniuk, humility was self-imposed. â€œThe first day, I gambled and it didnâ€™t work. Then yesterday when I went to my best back-up spot it ended up being the same exact stuff Denny Brauer was fishing. It was a little tense. I never dreamed that the stuff he was fishing was among the best stuff I found in practice too. We talked and I told him I was leaving it totally to him today. Itâ€™s the right thing to do,â€ explained Palaniuk, who for a 23-year old has consistently shown his character and fishing skills to be far beyond his years.