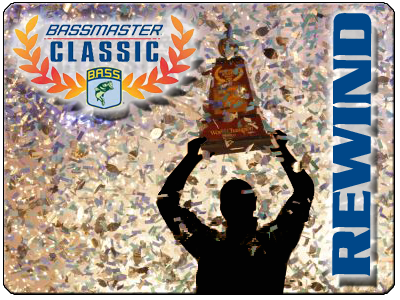 Rewind
The 2000 Bassmaster Classic became known as the Chicago Classic because it was being held out of the Windy City on Lake Michigan and the Calumet River off the main body of the lake.  The tournament was also significant because the daily weigh-ins were being held at Soldier Field in Chicago; the home of the Chicago Bears NFL franchise.

The event was dominated by several things, smallmouth bass, windy conditions, competitors fishing in close quarters and a lot of light line fishing.  Several of the top finishers spoke of having to downsize their line as the tournament progressed.  This was the tournament that the fishing industry at large was introduced to drop-shotting.

Woo Daves, then 54 years old grabbed the Classic victory in his 15th trip to the Bassmaster Classic.  During the pre-tournament chatter from pundits, Daves, from Spring Grove, Va. was off most of the radar screens.  He even reported himself that he didn’t feel very confident about his chances as the tournament was starting.

However, being the pro that he is, Daves put together a strong pattern, and adjusted with the conditions; the result was a chance to hold the Classic Trophy as his own. 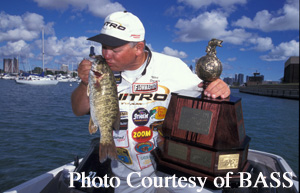 The Winning Pattern:
Daves said that when he went to pre-practice a month before the event, the smallmouth bass were spawning; which wouldn’t help him prepare for the postspawn / summer tournament ahead.  “I knew that I would have to find areas that had potential to hold bass offshore,” said Daves.  “I found one area that had chunk rock piled off of a seawall, and even caught a couple there.”

After scouting the open water of Lake Michigan, he went up the Calumet River looking for a largemouth pattern.  He ran up the river into Lake Calumet and located four offshore spots that he could catch quality largemouth off of.
A month later, as the official practice period for the tournament opened, he returned to go check those holes, and found three of them covered up by tournament boats.  “I didn’t even go check the other one, because I figured if they found those three, they’d have fond the fourth one,” he said.  “I told my wife that I was going to have to gamble on the smallmouth.”

He started the first morning of the tournament and made a pass down the wall with his green pumpkin Zoom tube with the tips of the tails dipped in chartreuse Spike It dye, and light jighead, but didn’t get any bites.  It was his second pass down the wall that produced two keeper smallmouth, and gave him a clue as to what he’d been missing.  “I was using eight and ten-pound-test Stren on my first pass,” he said.  “I switched to six-pound-test for my second pass and got those two fish.”
He picked up the heavier line for the third pass and again went fishless.  He switched to six-pound-test again for the rest of the day, and was able to fill his limit and cull one time.  His 8-pound, 4-ounce limit put him in 10th place for the day, only a little more than a pound a half from the lead.

He returned to his hotel, and spooled the remaining six pound line he had on another spinning reel, and returned to his wall for the start of the second day.  He caught two keeps on his first pass, and by the time he had finished his third pass, had a limit in the boat.

At that point, the wind that had been howling had died down, so Daves took the opportunity to sneak up on the wall and see what was holding the smallmouth there.  While he was up there, he caught three big smallmouth off the boulders near the bottom of the wall.  “I caught three fish that weighed up to four pounds each,” he said.  “I weighed in a little over 13 pounds and moved into the lead.” 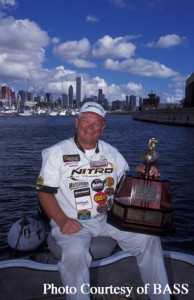 He started the final day of the Chicago Classic with a little more than a four pound lead over Shaw Grigsby, and he caught his best keeper on his first cast of the morning.  By one o’clock in the afternoon, after fighting heavy winds, he had filled his limit.

After his limit fish was in the livewell, he hooked the biggest fish he had on that day.  “I hooked a fish that weighed more than three pounds,” he said.  “It came to the surface, jumped and came unbuttoned as it went back down.”
Devastated, he turned to his media observer, Bassmaster Senior Writer Steve Price and told him that he thought he’d just lost the tournament.  Daves said that at that moment the sun poked through the clouds that hovered over Lake Michigan, and he changed his tune.  “I looked at Steve and told him that maybe that was a sign that I’m going to win.”

When he returned to weigh-in, he heard the rumor that Californian Mark Rizk had a big bag, and that he was a threat to take the tournament.  “They had the boats coming in from both sides of the stadium, so I hadn’t seen Rizk,” he said.  “Everyone said he had a good bag, so I started to get really nervous.”

At one point, a female writer from the Chicago Sun Times came up and asked him what it felt like to win the Bassmaster Classic; he told her that he didn’t know because he hadn’t won a Classic yet.  “While she was interviewing me, they brought Rizk on stage, and when his fish weighed less than 11 pounds, I felt like it was my tournament,” he said.  “I turned to her and told her it felt great, then went up and weighed my six and a half pounds; I was in La-La land for about an hour after that.”

Wrap Up:
Daves’ response to winning the Classic was to take the following year off from tournament fishing to go on the seminar circuit.  He said that he felt it was more important to share the joys of fishing with fans of the sport than to fish another year.   “I probably spoke to millions of fans the next year,” he said.  “I felt that it was more important to promote my sponsors and show people how much fun fishing can be.”

From a sponsorship perspective, Daves said the Classic title opened up doors outside the fishing industry for him.  “The only fishing industry company that I did a deal with that year was Mustad hooks,” he said.  “But, I was able to finalize deals for my Woo shoes, my new rods and an energy drink; those all came after the Classic.”

Daves said that winning the Classic was ultimate verification of his career.  “That was the ultimate tournament to win,” he said.  “It gave me a tremendous peace of mind to know that I’d won the one tournament that everyone who fishes wants to in; it was a great feeling.”