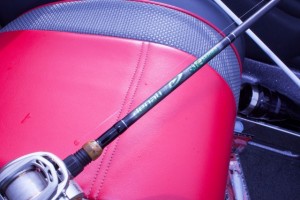 Fishing rods are important to anglers because they provide the action for casting and retrieving a lure. On a cast, a fishing rod reacts by bending to the load and whips forward to launch the lure toward its intended target. Specific rods will have actions that aid in working the lure; the stiffer the rod, the less an angler needs to move it to make the lure react. Rod tapers have a lot to do with the kind of action that a rod would have.

Today we will take a look at the Denali J2 J2843WJ, a 7’ medium-heavy, fast action rod designed for use with worms and jigs.

The J2 series is a redesign of the original Jadewood rods that the Mountain Home, Ark. manufacturer released when the company launched. The original Jadewood series was their value price point series, but still featured very high quality components and construction. The J2 series of rods did not change in the price point arena; it is still a lineup of rods that retails in the $99 to $129 price range.

Features
The Denali Rods J2 series begins with a matte finish IM7 graphite rod blank adorned with polished silver ring lock conventional sized guides. J2’s guide set is wrapped with gloss black wraps and bright silver trim bands. The updated series features a sculpted, split grip design made of solid, EVA material, and a new double trigger graphite reel seat with a blank exposed at the forward position. J2 Features an open designed hook keeper on the bottom of the blank in front of the foregrip. This hook keeper is designed to be tight on the entry point, so it is more difficult to snag line while Pitchin’ and Flippin’ 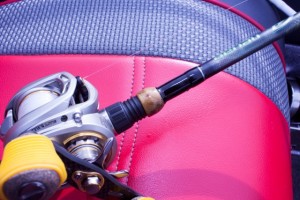 Along with the updated graphics on the J2 Series, the series features a newly redesigned foregrip featuring the hardwood foregrip that Denali Rods has become known for. The original Jadewood series foregrip was a more traditional, bullet shaped design, and the J2 now has a scaled down size; which aids in reducing weight in the rod, but still provides the added sensitivity angle have come to expect from a Denali Rod.

Graphite is a material that transmits, and in the case of a fishing rod, it further transmits the feel of a lure through the line down the length of the rod blank. When that signal reaches the hardwood fore grip of a Denali Rod, it almost explodes in the wood, giving the angler an amplified feel of bottom composition or of a bite.

The Tests
I matched our J2843WJ with a 7.5:1 Team Lew’s LTE reel spooled with 17-pound-test Berkley Trilene 100% Fluorocarbon line for throwing football jigs and perhaps a Texas Rigged worm. I was meeting an FLW Tour pro for a day on a small private lake for a photo shoot, but had to first catch the fish for the session. 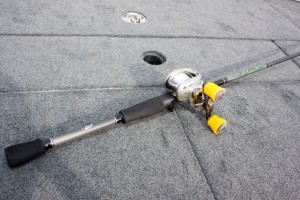 The day itself was a cold, dark day in January, and on small bodies of water, that can mean for very tough fishing. I started out with a jerkbait on a Denali Kovert rod, but it became apparent that the fish were not likely to respond to a reaction presentation. After catching a few small fish on a dropshot rig, I picked up the J2843WJ which I had tied a ½-ounce Football Jig and trailer on.

Upon the first cast, I began pulling the jig across the bottom, and could immediately tell that the J2 was a very sensitive rod. With cold hands from the wind and low temperatures, I could easily feel the lure come into contact with rocks and brush on the bottom. Not only could I feel the obstruction, but I could also distinguish the difference between the two different items on the bottom.

It took about a half an hour to get a bite in the cold conditions, and when I did, it wasn’t like it was an aggressive bite. What I felt instead was just a feeling of heaviness as a three-pound fish mouth the bait. I say “mouthed the bait,” but in actuality the fish must have just laid down on the jig to try and stop it.

I felt the heaviness and set the hook, and fought the fish to the boat, and when it got there, the jig was hooked in the middle of the bottom of the jaw, outside the mouth. I never felt a thump, but I felt something “different” in the lure, and knew that I was getting a bite. 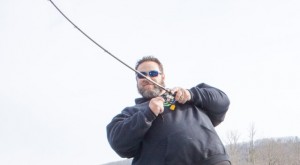 The author fights a fish on the Denali Rods J2 J2843WJ

Conclusions
The only thing I would disagree with Denali Rods on is the labeling of this blank a fast action rod. The J2843WJ has plenty of power to cast lures up to the one-ounce range as the labeling calls for, but when under load, there is a much more parabolic nature to the blank, which I believe would put it in the mod fast category, as opposed to fast action. I personally prefer an extra fast taper for fishing jigs and worms on the bottom, and would probably put this rod to use in the spinnerbait, swim jig, Chatterbait category myself.

I liked the sensitivity of the J2843WJ, it certainly is a rod that outperforms its price point. Think back to the $100 rod market several years ago, and the reality was you were not dealing with a high performance category. The Denali J2 is certainly not in that realm; it is a very sensitive, very attractive package that any angler would be proud to have on their boat.

For more about Denali Rods, visit them on their website at http://www.denalirods.com, or to purchase a J2, or any other Denali rod, find them here on http://www.OutdoorProShop.com/?Click=8130.