story and photos by Rob Lever and B.A.S.S. 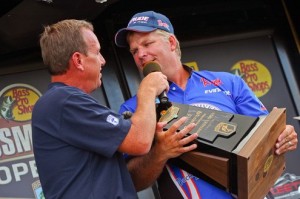 It’s 6:00AM on a Monday and the Dean of The Bass University Pete Gluszek is starting his day. Gluszek is a tireless worker who is going into his fourth year owning the University with his longtime friend Michael Iaconelli.

Juggling his duties as the Dean, a guide, and a professional angler have proven to be a tough task. This has all come to a head in the last year with Gluszek only having time to fish in 5 professional events.

Now a couple of weeks later, things have changed and Gluszek is on top of the Bass fishing world. After a win at the final Bass Pro Shops Bassmaster Northern Open on Lake Cayuga, Gluszek has punched a ticket to the 2013 Bass Master Classic. “Every time it gets quiet, I smile”, said the New Jersey pro who is fishing his first Classic since 1999. He summed up what he said he felt after realizing that he would once again be fishing the biggest single tournament in bass fishing, “it’s a humbling experience.”

While The Bass University is still the focal point of Gluszek’s days, his office time has changed in the past week. He took the time to reflect on a career with now four professional wins in both FLW Outdoors and B.A.S.S. competition. When asked where this win ranks among his others, Gluszek said that “it is amazing”. He said, while this win was amazing, his first win in 1999 was “the most important”. “It taught me how to win”. When I asked him to elaborate a little more on his first win Gluszek said, “After you win, you are always a winner.”

Always aware of what is happening around him, Gluszek pauses from our interview for a second to check on his son who is playing in the same room. He then stops talking about his success on the water to tell me he is excited that his son will be turning three on Thursday; sort of a reminder of his varied focuses over the past several years

This helps you understand why this man has been so successful as both an angler and teacher. Gluszek treats everyone he meets with patience and respect. His approach is what makes him one of the most respected people in the bass fishing community.

He said that while the goal is to help the students become better anglers, his time at The Bass University has made him a better angler. He said that the process of speaking and answering questions from students, “makes you self-reflect”. 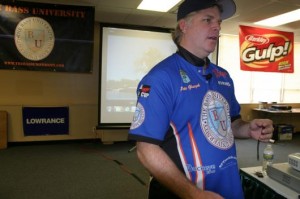 He also said he takes time to be a student himself. He spoke about the importance of learning from every speaker and not getting stuck in a rut. “I’ve learned to not be afraid to try new things,” he said.

Even at a time when Gluszek should talk about his own fishing, he decides to become the teacher. He breaks from the conversation about his win at Cayuga to talk of slowing down on the water and that the Motto of Bass University is to “Never stop Learning.”

He said his time at The Bass University helped him at the Northern Open win. An electrical short during practice rendered his electronics useless, so Gluszek had to take his own advice and slow his fishing down. “I had to use old fashion triangulation to find my areas,” he said. “I would find a spot on the bank behind me, the bank in front of me and one to the side to line up on exactly the spot I needed to fish.”

Once he got on his areas Gluszek used two patterns for his win. He started his day flipping a weighted five-inch stick bait on the edges of milfoil in 15-feet of water. Everyday around 11:00, he would change it up and move shallow.

After that, Gluszek targeted docks by skipping a weightless five-inch stick bait. This proved to be a different pattern, as most anglers started shallow and moved deeper in the afternoon. “I stuck with mainly power fishing and saved my finesse tactics for late in the day.”

With six months to prepare for the Classic Gluszek said that he will be concentrating on several things in preparation. “I’ll really be focusing on staying Competitive, and what I did this past week; remembering how to win,” he said “I think before I get on the water at Grand will be the best way to prepare.”

He also said that he will fish earlier next year than usual. Because he lives in the Northeast, and angler can develop a case of rustiness. So, he will be trying to enter some tournaments in January to get warmed up for the 2013 Bassmaster Classic.

This will be something new for Gluszek, who spends most winters teaching at the Bass University. He will also be busy with Bass University session, and will travel to New York, Dallas, Chicago and Philadelphia with the University.

As the conversation winds down, Gluszek starts to reflect on what has been the best part of winning the tournament and qualifying for the 2013 Classic. He answers by talking about others again. he brings up the support from his fellow anglers, and the response through Facebook and text messages. “It’s been a little overwhelming.” he said.

Gluszek said that his biggest fans are his wife and son, and that he knew they were behind him the whole time. “ The first call I made after I won was to my wife,” he said. “After the initial celebration, the first thing she asked was if she could go to bed. She couldn’t sleep until it was over, and now she could relax because she knew I had won.” 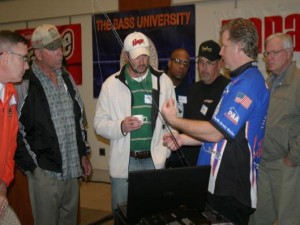 Next February in Tulsa, Gluszek will walk across the stage as one of 50 men who qualified for the 2013 Bassmaster Classic. This is only the consolation prize for a man who set out to make the Elite Series during this year’s opens. “My goal is to continue to grow the University, and make the Elites Series.” When asked how he feels about the year ahead, the husband, father, and teacher answered – “amazing.”