largemouth, but his choice of lures centered on one primary technique – Drop Shotting.

As you might expect – the holder of an engineering degree from Auburn takes a slightly analytical approach to choosing weights for his drop shots, and it’s a strategy that makes great sense for getting snagged less, feeling more bites, and catching more bass.

“I use both tear drop and cylinder-shaped drop shot weights, but each is a tool best designed for a certain job, and the key is to know when to use each of the two styles,” says Lee. 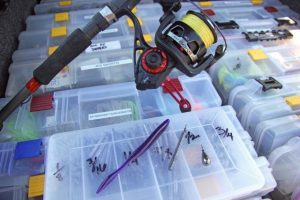 Cylinders for weeds vs. Teardrops for rocks

“When you’re fishing thick vegetation like I faced a lot of on Champlain, you’ve got to use a skinny cylinder-shaped weight, or you’re going to constantly be snagged in weeds,” explains Lee. “If you try to drag teardrop-shaped weight through those weeds, it’s nearly impossible to keep it clean, and you’re going to get really frustrated.”

Conversely, Lee states that the rounder teardrop shaped weights tend to get through rocks a little better.

Tungsten vs. Lead
“The cylinder shaped weights I use in weeds are made of lead, and they’re much less expensive than tungsten, but when I’m fishing deeper where there’s no weed growth, and rocks typically come into play, I want the benefit of tungsten’s sensitivity to feel the rocks on the bottom – especially if I’m out there in 25 or 30-feet of water,” he explains.

How heavy?
Shape aside, anglers new to drop shotting often wonder how heavy their choice of weights should be, and Lee has a simple answer. 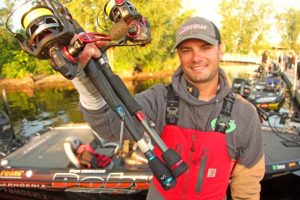 “Use the lightest weight you possibly can, and still be able feel your drop shot,” says Lee. “But as a rule of thumb, if you’re fishing less than 15-feet deep, try starting with a 1/4 –ounce weight, and if you’re fishing those deep zones like 25 or 30 feet, it’s probably best to use a 3/8-ounce in most situations.”

Rods, Reels, Line, Lure
Want to replicate Matt’s basic drop shot set-up? Try a 7’ 4” Quantum Tour KVD spinning rod, paired with a size 30 Quantum Speed Freak spinning reel that picks up an amazing 36” inches of line with every turn of the handle – which is especially helpful when fishing in deep water, or for catching up with torpedo-like Smallmouth when they bite.  He spools up with 10-pound braid tied to an 8-pound leader made of Seaguar Tatsu fluorocarbon line.

As for lures, his favorite choice is Strike King Dream Shot rigged on a #1 size Owner circle hook. Lee says brown/purple is hard to beat for a worm color. And remember, teardrop weights made of tungsten for rocks, and lead cylinder-shaped weights for weeds. A mix of ¼ ounce and 3/8 ounce should cover most all your needs.