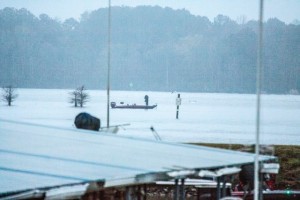 Spring is a time of change in all aspects of the natural world. Ice melts, trees bud and flower, birds nest, and bass anglers come out of their igloos, ready to chase silly green fish for another season.

The bass are also in a time of flux, and the pre-spawn period (when they start moving out of their wintering locations through the time they go to the bed) can be both the most exciting time of the year to fish, and also the most frustrating.

If you’ve spent a lot of time on the water in the spring, you’ve undoubtedly had days that you’ll not soon forget. Big bass that bite whatever you’re throwing, days that make you look and feel like a BASS Elite Series pro. You’ve also likely had days where you feel like all the bass in the lake left for spring break.

The feast or famine aspect of the pre-spawn is one of the things that makes Elite Series Pro and Denali staffer Chad Morgenthaler enjoy fishing it so much.

“The pre-spawn is one of my favorite times to fish,” Morgenthaler said. “Obviously, the bass are fat and feeding, but I also like it because it is a time of change and I enjoy figuring out the puzzle every time I get on the water.” 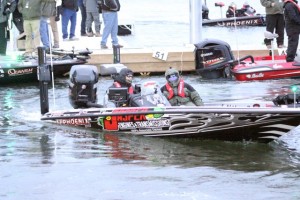 Figuring out that puzzle is something that he’s got more experience with than most, and he was gracious enough to provide the following tips on pre-spawn fishing, which you’ll hopefully employ this upcoming season.

Sun and wind are your friend.

To Morgenthaler, the ideal conditions for pre-spawn success would be wind and sun. In fact, he prefers at least a little ripple on the water any time of the year, but said it was especially important before the bass get up to spawning.

“Lots of folks don’t like fishing in the wind,” Morgenthaler said. “I get it, it’s frustrating at times to fish into the wind, but they’re missing the best bite of the pre-spawn. Combine a sunny day with a strong breeze and the bass will really start to feed. They feel secure with all the surface commotion, and the sun warms the water up which activates baitfish and starts the whole natural cycle.”

Because of this, when searching for pre-spawners, Morgenthaler always starts on the wind-blown sides of coves or bays. If it’s not windy or sunny out, you can usually still find out where the areas are that were getting wind in the previous days and concentrate on them.

Because pre-spawn bass are in a relatively constant state of flux, Morgenthaler said that covering water is a necessity – something best accomplished using moving baits.

“In my opinion, the best pre-spawn baits are anything that you can fish efficiently while covering a lot of water. In clear water, my favorite would be a spinnerbait, and in stained or dirty water, I’m usually throwing a vibrating jig.”

The reason Morgenthaler relies so heavily on moving baits like a spinnerbait or vibrating jig is because pre-spawners are pretty shallow, and at times you’ll need to relocate fish on an almost daily basis. Spinnerbaits and vibrating jigs are two top performers at covering lots of water up shallow. 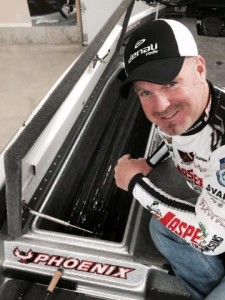 “I’ll usually start out fishing transition areas like secondary points, the first 1/3 of a major creek, channel swings, and the mouths of spawning areas,” Morgenthaler said. “You’re going to want to put the trolling motor down and just make lots of casts to any cover you come along, waiting to run into the fish. Once you get a couple bites, you may find out that the bass are all on secondary gravel points, or around stumps on the creek channel, and then you can really focus in.”

When throwing a spinnerbait, Morgenthaler recommended a shad colored 3/8 or ½ ounce Hawg Caller tandem willow with a gold and silver blade.

If the water’s got less than about 1 foot of visibility, Morgenthaler opts for a black and blue or green pumpkin 3/8 or ½ ounce Hawg Caller Shake ‘n’ Shad.

If you’re out on the lake covering water with a spinnerbait or vibrating jig, you’re bound to encounter a variety of different types of cover or structure over the course of a day. Because of that, the rods you choose need to be able to handle an extremely wide variety of situations.

“If I’m cruising down the bank with a spinnerbait searching for pre-spawners, I’m going to be making long casts to the bank. Then, I may come up to a laydown and need to make short roll casts around it. After that, I may see a stump and need to have the accuracy to hit it the first cast. All those factors need to be accounted for. If you have too heavy of a rod, it won’t have the accuracy necessary up close, and if you use one that’s too short, you won’t be able to cast far enough,” Morgenthaler said.

“The Kovert spinnerbait rod is absolutely perfect for covering a lot of water in search of pre-spawners,” Morgenthaler said. “It is super light, which means you can chuck and wind all day. It’s also accurate enough to put a spinnerbait in some pretty tight places but heavy enough to pull out a 6 pounder when it eats.”

For the Chatterbait, the Morgenthaler looks for the same attributes – Light weight, good combination of accuracy and power, and just the right amount of tip. He has had the most success with the 7 foot 2 inch MH Kovert worm and jig rod, because the Shake ‘n’ shad puts off more vibration and has a larger hook. 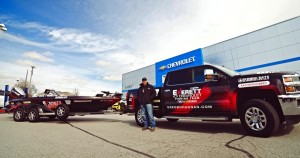 “Although you’re fishing them similarly, the Shake ‘n’ shad pulls a lot harder than a spinnerbait, so I go up to the heavier rod to handle it while still maintaining the right versatility,” Morgenthaler said.

Despite the promises of hot action, water in the upper forties is still cold, and Bohannan said that anglers should take that into consideration when cranking cold water bass.

“You want to make sure that you’re not retrieving your bait as fast as you would in the summer.” Bohannan said. “The bass are more aggressive than they were in January, but you still need to give them time to get the bait, and that means a moderate to slow retrieve most of the time.”

Bohannan will also occasionally pause the bait, especially when it contacts something like a stump, rock, or treetop. “A lot of times, I’ll kill it right after I hit something and that generates a lot of strikes. The crankbaits I use float, and when they see it floating slowly away from them after it hits something they just have to eat it.” 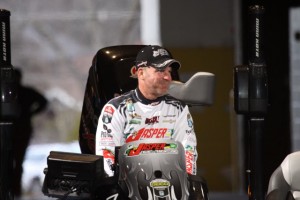 Taking your time is important not only in an individual cast, but Bohannan also said it is important in the number of casts you make to an area. “Unlike some other times of the year where you can throw in an area a couple times and don’t get bit then move on, in the early season you really need to saturate an area to maximize the number of bass you catch.”

Although it was hinted at in all the previous tips, Morgenthaler wanted to stress one more time how important it is to stay versatile in the pre-spawn, and said inability to adapt is one of the more common reasons people struggle.

“I see guys all the time that show up in the spring and just fish the same areas they fished the week before, or even the year before,” He said. “If you get out there and you’re not catching fish, move, experiment, or do something different. In the pre-spawn, it’s more likely that they’ve moved rather than stopped biting.”

The same thing goes for cover type as well. Morgenthaler has seen pre-spawn bass load up on a particular piece of cover like stumps, deeper laydowns, or docks, so it’s imperative to fish multiple types of cover through the course of the day to pattern the bass.