story and by Pete Robbins photos by Seigo Saito 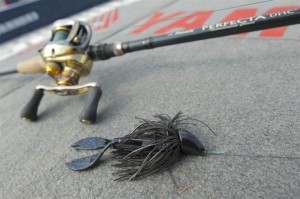 When it comes to summertime angling on northern natural lakes, there may be no tour-level angler as consistent as North Carolina’s Dave Wolak. The Pennsylvania native has a string of top tens on lakes like Champlain, Oneida, Seneca and Cayuga to his credit and he’s a threat to win any time he launches his boat there.

While rocky shorelines, man-made cover and offshore humps play a role in his success, ultimately he has prospered by being able to dissect the vast grassbeds that characterize many of these lakes. The old adage that you must “find the grass to find the bass” often holds true, but when there’s miles of greenery there’s a science to quickly determining which areas will produce more and bigger bass, both largemouths and smallmouths.

First and foremost, he said, start looking in areas that have the potential to support a population of fish, not just a few rogue stragglers. “You need to be near something like a spawning flat or a creek,” he explained. “You could have the best looking small pocket on the lake, with one dock in it, and you may catch one from it, but if there’s nothing else to bring a group of fish there, it usually won’t pay off. For example, on Champlain, the middle portion of the lake has a notoriously small population of largemouths, so you could have the best grass in the world and it’s still unlikely to hold the same number of fish as it would in Ticonderoga, which offers a much larger population.”

While various forms of vegetation can all hold bass in good numbers, Wolak’s search typically starts off looking for areas where milfoil dominates. He likes the “hyper-green stuff with red tops. It’s not juvenile, but it’s still growing toward maturity.” With that in mind, he also looks for two primary characteristics, what he calls the “two M’s” – mixing and mats. “That’s how I talk about it in my Bass University seminars,” he said. “Fish are always looking to seek refuge, so the areas that are denser than others give fish more options.”

Even in areas where the grass is visible to the eye, he uses his Humminbird electronics to discern bottom composition, which plays into his seasonal approach to fishing. “That’s a key variable,” he explained. “If it’s growing on sand, that’ll be good in the spawn. If it’s on rock, that’s usually better in the summer and/or fall because it grows later in the year.” 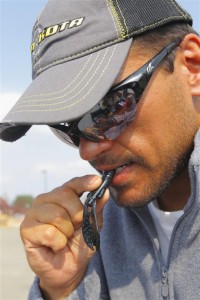 As a general matter, he’ll flip to locate his fish. That’s his preferred technique because “it’s the most stable pattern.” In a single day tournament, you may be able to get away primarily with moving baits, but over the course of three or four days, a Texas-rigged craw or a heavy jig is the least likely to suffer a letdown. “It also depends on whether it’s a terminal bottom or if there’s another sort of grass growing within the milfoil,” Wolak explained. “If there’s something else under it, it doesn’t mean the fish aren’t there but it changes the way you have to fish it. If you’re flipping, your bait will disappear into that hydrilla, so you may do better with a frog or a chatterbait or a swim jig when you have that sort of undergrowth.”

Of course, flipping can be a slow way to pick apart a grass bed, so during practice Wolak takes a selective approach to the vegetation. He may flip every five feet instead of every foot. Otherwise he’s likely just to focus on the most obvious and identifiable outlying spots, like the largest, thickest clump in an area. He’ll also work to identify whether he’s “getting bit in the holes, or in the center of the little pom pom patches, or when it’s swimming by….usually with grass, something will indicate very quickly that you’re in the right area.”

While cabbage, hydrilla and other grasses have their day, what makes green milfoil so desirable to Wolak – whether it’s shallow or out in 15 feet of water, is that it creates firm edges. “I like the cavernous holes,” he said. “They like to have those ambush points and they like the contrast of light and dark, which means any place they can get under a mat and then dart into an open area to feed.”

While grass is a reliable refuge for northern fish, it’s also cyclical. Wolak keeps his eye on potential areas from year to year to gauge where the bite is likely to improve and where it’s likely to fall off.

“The area I won the Open in (at Champlain) was a place that I had watched for a few years,” he stated. “It peaked in 2010 and I took multiple top tens out of there, but the last couple of years there hasn’t been a stitch of grass in there. This year there were literally two skinny strands of milfoil in 500 yards.”

He noted that it pays to check out places that used to be hot but have lost their grass – and their mojo – in recent years. “The finger lakes are probably the best example of that,” he said. “they’re deep bowls, glacier lakes that are surrounded by milfoil. But gradually it tapers off in certain areas and people forget about them. Then people can take advantage of it, like Pete Gluszek did (in the recent Northern Open on Cayuga). It’s ever-changing.” 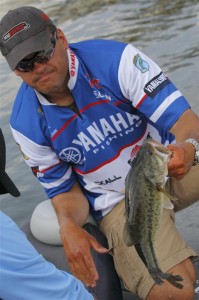 Indeed, while the layout of a grass bed doesn’t change during the course of the day, the way bass use it may. Often at Oneida, Wolak would spend practice time idling in 10 to 13 feet of water, looking “for little sparse grass where the bottom is real hard.” Even where he could barely see the top of the grass, he’d flip ahead of the boat and nail fish after fish after fish. But as the day progressed, and light penetration increased, the bass would bury up in the thicker sections. They didn’t leave altogether, but in order to follow them and keep catching, he’d have to shift his focus. He noted that “they’re always looking to seek refuge,” and with that concept in mind, it’s easy to follow their path from hour to hour.

Follow Wolak’s roadmap, and you’ll have a head start on making that process work for you.