Catching up With Spring Fishing – with Wesley Strader 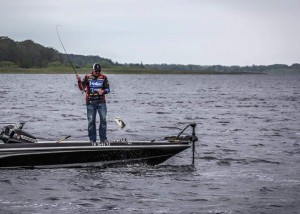 If you’re anything like any red blooded bass angler out there, the spring turns your fancies to big females. The thought of the prespawn bite can make you daydream for hours. You suffer through the long, and as much of the country experienced this year, unusually cold winter.

A week later, signs of spring fishing arrive. Buds flower, grass starts to turn green and all of nature starts to awaken. This signals a change in the angler. He can do little else than think of things on the water. They all stand around with that far off look on their faces with a slight smirk on face with drool sliding out of the corner, bosses and families gets annoyed, and, well, they’re just worthless until they hit the water this weekend.

Saturday finally comes, and the that person who struggles out of bed for work at 8:00AM, is the first truck and trailer in the parking lot at the launch ramp at 5:00AM. He slides his boat into the water and spend the day pounding the shallows looking for those big prespawn females that have been waiting to move up for just such a time as this.

He fishes hard all day, and manages only a few small fish. He puts his boat on the trailer as annoyed and frustrated as those who waited for him to get out of his daze through the past week.

He wonders what happened. He begins thinking to himself “the fish are always in those shallow areas every year this same time.” His problem? He got ahead of the fish because of the elongated winter.

Behind Schedule
Wesley Strader, the FLW Tour pro from Spring City, Tenn. Said that what happens in that situation is that the angler got ahead of the fish because the fish are essentially behind schedule. “I think what happens is that the bass don’t get the amount of sunlight they need, and they hold back on their commitment to migrate into the shallows,” he said. “They want to go, but the shorter days and low light conditions don’t allow the bass to have what they need to begin moving up.” 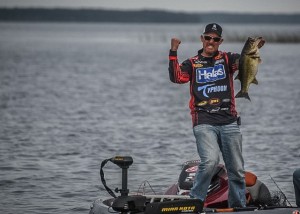 He compared the bass’ movements to those of turkey; which he hunts in the spring, and the family dog. “It might be way too cold for turkey to start gobbling and beginning the mating ritual, but if they get the right amount of sunlight, they start gobbling,” he said. “We might have a really cold day, but the sun pops out, and the dog will want to go lay in the one sunny spot on the cold concrete – they’re similar to bass.”

Migration Patterns and the Effects of Cold
Strader said that he can’t completely put his finger on what ultimate conditions seem to make bass move up, but at some point the female bass will move up and begin to feed up. That is the period when anglers begin to show catches of big, full bellied females. After a little while, the catches of big fish stop and anglers start catching averaged sized males.

His theory is that the females move shallow first, then back off to wait for males set up the nesting areas for the spawn before they come up. “I’m pretty sure that what happens each year,” he said. “But, these extra-long winters, like we had this year seem to delay the whole thing as much as a month from the usual times.”

How to adjust
While many anglers spend their whole time fruitlessly beating the shallows, Strader said that he starts his search there, he will make adjustments to give himself a chance to be competitive. “I start every spring day looing in the back of the creeks and pockets for the prespawners,” he said. “But, I can’t allow myself to die back there; I have to have a game plan that allows me to make adjustments if the fish aren’t there.” 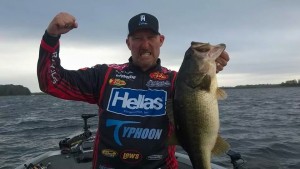 He said that he looks in the pockets and makes a decision on which lures to throw based on the kind of cover in there. He always begins at the last point going into the pocket and works his way back. If there is rock or wood cover, then he throws a signature double Colorado bladed Stan Sloan Bango Spinnerbait or his signature TH Custom Lures flat sided balsa crankbait. If the primary cover is grass, he’ll still use the spinnerbait, but mix in a lipless crankbait and a Chatterbait as well.

If he does not get the bites he thinks he should, he moves back out of the creek, hitting obvious staging points until he connects with the fish, or gets out to the main channel. “Once you locate them, it’s pretty easy to pattern them through the rest of the area,” he said. “You can just run the program and find similar results that day; and possibky for a few days after.”

Gear
Strader throws his spinnerbait and Chatterbaits on a Powell Max3D 723 paired with a Team Lew’s LTE reel with 6.5:1 retrieve speed filled with 15-pound-test Fluorocarbon line. His crankbait rod is a now discontinued Powell 753 Glass cranking rod with the same Team Lew’s LTE reel with 10 to 12-pound-test Fluorocarbon line, depending on the depth of water he is fishing. 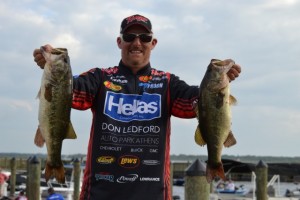 “Those are my tournament tools,” he said. “But, when I’m out fin fishing at home and I end out back out on the flats by the main river channel, I really like to throw an umbrella rig with five Zoom Swimmin’ Super Fluke Jr.’s rigged on them. Those things can really help you find a school of fish in a hurry.”

Final Pointers
Strader said that he cautions anglers to not let themselves get conditioned with events of the past. He said that it is important to stay on the move and search. “This is a time of the year when things change very quickly, and you have to stay on your toes,” he said. “The weather we’ve had this year has pushed things back about three weeks, but it will only take a few days of high 70 to 80 degree days to catch things back up.

“Either way, anglers should really be ready to begin their search each day, because the way things happen this time of the year, they could be missing a great bite, even if they are on a good one.”