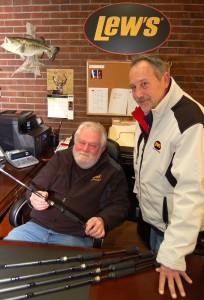 SPRINGFIELD, Mo. (Feb. 3, 2014) – Lew’s, a fishing brand famous for its reels and that once also had the top selling bass rod in the country, is turning its attention to rod development again. With the new focus comes the addition of veteran rod builder Bob Brown to the Lew’s product team and more bass professionals converting to Lew’s Speed Sticks as their rods of choice.

Today’s Lew’s, under new ownership and leadership since 2009, is once again relying on angler input and technological innovations to drive rod development, following a similar process to what it did to bring its reels back to market prominence in short order.

“Many folks think we just make reels, but we’re equally committed to making Lew’s the best name in rods too,” said CEO Lynn Reeves. “We’ve always had rods, and our current lineup is our best ever, offering several Speed Stick series with the latest in designs, materials and actions.”

A growing number of bass professionals along both the B.A.S.S. and FLW trails are now using Lew’s rods, including David Fritts, Mark Menendez, Peter Thliveros and Mark Davis, all whom have contributed to the Lew’s rod development process over the last couple of years. More recent converts are two anglers who are about to achieve the prestigious million-dollar milestone in tournament earnings, Kevin Short (Arkansas) and Glenn Browne (Florida).

“My Lew’s reels are awesome, but I’ve also been watching Speed Sticks evolve in recent years,” explained Short. “I live just a couple hundred miles from Lew’s headquarters in Springfield (Mo.), so I’ve been able to personally witness the company’s change in rod focus and performance, and it’s for real. I’m liking, and I mean really liking, some of the specialty actions in both the Team Lew’s and 365 series that serve my fishing style perfectly. I’m saying Fantasy fans, watch out for K-Pink in 2014.”

Browne had a similar assessment. “As a hardcore Florida flipper, I’ve got to get big fish up and out fast,” he said. “On my very first hookset with a Team Lew’s prototype flipping stick, I jerked a 3-pounder straight from the cover and right into the boat. That’s exactly what I want in backbone.”

Other distinguishing characteristics occur within specific series, such as the “Palmer” reel seat found in some models within the Fritts’ rod line, a design that helps relieve arm stress while fishing deep-diving crankbaits. There’s also the Carbon Nanolar blanks of the 365 series, a lightweight graphite construction that leads to the 365 name because the rods are built for every-day-of-the-year fishing.

“Lew Childre was never satisfied with status quo, nor are we. We believe anglers of every level benefit when we listen to what our customers have to say and strive for continuous improvement. I like to think that’s exactly how we do it at Lew’s,” he added.

Lew’s Speed Sticks vary in price according to series, ranging from Laser LG models at $49.99, to the top-of-the-line Team Lew’s rods at $199.99. For more information on all Lew’s rods and reels, visit Lews.com.