Rewind
The 1999 Bassmaster Classic was held on the vast expanse known as the Louisiana Delta, a body of water which would become a favorite destination for the sport’s largest event. Fresh off his 1998 classic win, Denny Brauer was poised to put his flipping skills to use and defend his title. Unbeknownst to him, and the rest of the bass fishing world for that matter, Davy Hite had other plans and put together a flawless tournament and outdistanced Brauer by nearly ten pounds.

The tournament was for all intents and purposes over after his gigantic day two catch, but a critical mistake in the 1996 classic insured he would not let up. In 1996 Davy Hite finished in second place, but lamented that he had eased up on his fish a bit because he believed he had the tournament won. The 1999 classic boasted perhaps the most “elite” top five in recent memory; comprised of anglers who are now considered the legends of the sport. It also gave us our first glimpse of a relatively unknown New Jersey angler who would later become a force to be reckoned with. 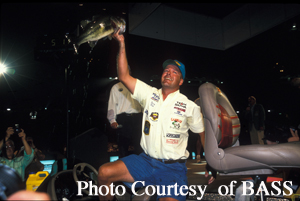 Davy Hite with one of the bass that helped him win the 1999 Bassmaster Classic – photo courtesy B.A.S.S.

The Winning Pattern:
During practice, Davy Hite located an area where he could actually see numerous three to five pound fish. The problem was they were all dead floating atop the water. To many anglers this might make them shy away from the area, but Hite saw this as an opportunity. After carefully scanning cover he realized that he would have hundreds of targets to pitch to including stumps, logs, and infinite floating hyacinth mats. It’s often said that on the Louisiana Delta anglers live and die by one area they believe in and Hite was no exception to that rule; he based his tournament life on a hunch and dead bass.

The first day of the tournament the anglers came out swinging. Hite threw a variety of baits ranging from a topwater frog to a big Texas-rigged worm. He would later reveal that he fished a Gambler Bacon Rind almost exclusively throughout the tournament, but when the situation dictated it he would make a few casts with a soft bodied frog.  Day one went well for Hite. He caught eight keepers and was optimistic his area would have enough fish for the final two days of competition. Hite’s bag of fish weighed in at 16 pounds, 9 ounces; an incredible limit weight for the Louisiana Delta, but it was topped by two anglers sharing the same water. Jack Wade and Mickey Bruce weighed in 16 pounds, 13ounces and 16 pounds, 10 ounces respectively. But, as history shows, sharing one area is never a good thing. Davy Hite, on the other hand, had his fish all to himself without as much as a boat in site. 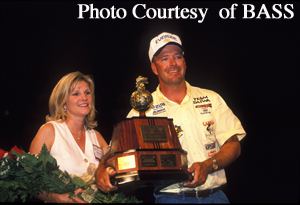 Day two belonged to Hite. Catching 16 pounds the first day was outstanding, but his performance the second day is what separates champions from contenders. On a day where the two anglers ahead of him faltered, Hite brought in 19 pounds, and 3ounces. The story remained the same for Hite. He fished in the same area without another boat anywhere near him and the big bass continued to bite his Gambler worm. There was a major shakeup in the standings that resulted in Ron Shuffield jumping up to second place on the strength of a 16 pound bag. Shuffield, his closest competitor heading into the third and final day, was nearly six pounds behind him and admitted it would be a long-shot to unseat Hite as the leader.

The third day went exactly as planned for Hite. They might as well have ended the tournament after the day two weigh in. Hite not only matched, but surpassed his huge bag from the previous day bringing in 19 pounds 14 ounces worth of bass. Despite respectable limits from the other competitors the weigh in was basically a formality as Hite won by a margin just shy of ten pounds.  Hite revealed that the majority of his fish during the competition fell for the Bacon Rind worm swam through sparse hydrilla in water one to four feet deep.  He Texas-rigged the worm with a 3/8-ounce screw-in bullet weight and a 5/0 Owner Rig’n Hook. The other baits he fished throughout the week included a 1/4-ounce buzzbait, a shallow running crankbait, and a homemade white frog; none of which produced as consistently as the Gambler worm.

Wrap Up:
After his 1994 angler of the year title and his near classic win in 1996 Hite put together what many consider the most perfect classic performance to date. His experience in the 1996 classic served as his motivation for his dominance of the 1999 classic. The title of 1999 Bassmaster Classic Champion was the final piece missing from his relatively young career. With several years still ahead of him Hite had established himself as one of the sport’s legends with an Angler of the Year and Bassmaster Classic title to his credit.