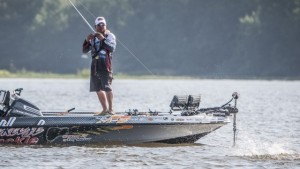 EUFAULA, Ala. – Pro Troy Morrow of Eastanollee, Georgia, caught a five-bass limit Saturday weighing 15 pounds, 4 ounce to retain the lead on day three of the Walmart FLW Tour at Lake Eufaula presented by Quaker State. Morrow’s three-day total of 15 bass weighing 54 pounds, 13 ounces gives him a slim 4-ounce lead over second-place pro Bryan Thrift of Shelby, North Carolina, heading into the fourth and final day of competition. The field is now cut to the final 10 anglers in the event that featured 149 of the best bass-fishing anglers in the world competing for a top cash award of up to $125,000.