Take it To ’em Topside with Murray, Rowland and Scroggins 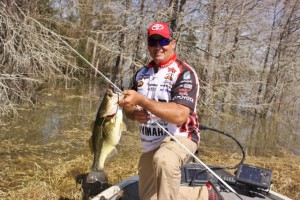 by David A. Brown

So I’m sitting in the middle of the lake with Bassmaster Elite Series pro Terry Scroggins as he chats boat-to-boat with a fellow tournament pro, when the telltale flipping, splashing and ravenous commotion bespoke schooling bass even before we turned our heads for visual confirmation. Scroggins is known for carrying baits for any possible scenario, but this was an easy decision. He grabbed a Zara Spook Jr., fired it toward the fracas and drew a strike after maybe a half dozen twitches.

“Look at him – he’s all over it,” Scroggins said of the unbridled schooling bass aggression that delivered the timeless entertainment that has buoyed the popularity of topwater fishing for decades. 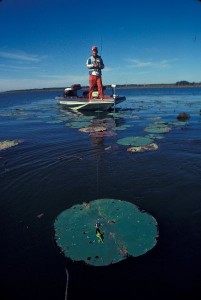 Bobby Murray – the first Bassmaster Classic winner and topwater aficionado – points to Heddon’s Spook lineup as his go-to bait choice from the time spring water temperatures reach about 65 degrees, all the way through the fall when bass start targeting bigger baitfish. A range of sizes from 3 to 7 inches affords Spook casters a diverse arsenal, says Murray.

“People think a topwater is just for catching fish in shallow water, but it’s much more versatile,” Murray said. “There are times in the spring when you can catch fish on a Spook in four to five feet of water. But there are also times that I can literally be sitting in (over 30) feet of water, throwing over a deep hump or some submerged trees and have the ability to call that fish all the way to the surface.”

When it comes to topwater retrieves, walkers vary mostly by cadence – how quickly each side-to-side move is made. Poppers, on the other hand, offer a little more variance. For starters, you can ditch the straightforward popping and go with a walking retrieve.

For popper prowess, few names rival that of Bassmaster Elite pro Zell Rowland. He, too, sees widespread applicability for the topwater game.

“I get asked all the time ‘When do you like to throw a topwater bait,’ and my answer is usually ‘When nobody else is,'” Rowland said.

That being said, different scenarios call for different looks. For simplicity, he breaks down his retrieve options by seasonal temperature:

Warm Weather: “As the temperature rises to 64-70, I’ll change the cadence to where I’m speeding the bait up more. I’ll also make the bait spit and chug at the same time.” 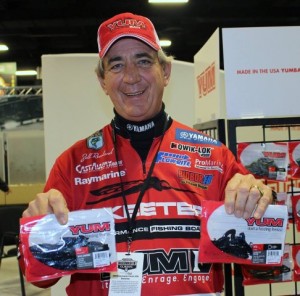 Hot Weather: “When the water reaches 70, 80 or 90 degrees in the summertime – especially if the water’s clear – I don’t like to work the bait extremely slow. I don’t want to give the fish a long time to look at the bait. I want him to look at that bait and think it’s a shad running, so I’ll have a tendency to move that bait extremely fast, while making the bait spit and walk at the same time.”

Rowland also factors wind conditions into his topwater presentations. Slick calm days allow fish to see and hear surface activity from long distances. On a windy day, however, he’ll go heavy on the chugging action to maximize his chances of getting his bait noticed amid the waves.

ROD READY
Murray said the key to effective topwater retrieves – particularly for walking baits – is a 6 ½- to 7-foot soft-action rod. No spinnerbait or worm rods; just something with the right amount of fish-fighting backbone, but sufficient flexibility. Murray said you’ll know you have the right one when you tie on a topwater, shake the rod and watch the tip move about 5-6 inches to either side.

“All you’re trying to do is hit the end of the slack on the presentation,” he said. “You’re not trying to jerk the lure, you’re just making it change directions. When it changes directions with a hard pop on a soft rod, it sounds like a fish striking. That sound draws fish to it.”

Murray finds that the stretch of monofilament best serves his topwater action, but reel speed matters little. Control comes from the winding cadence, so a slow or fast reel will suffice. 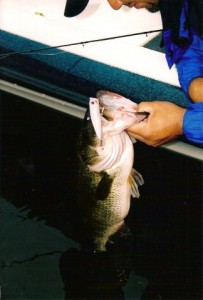 MAKE ‘EM WANT IT
Often you’ll find fishing tracking your topwater for considerable distances before striking. Some will wake like a rising submarine, or even boil under the bait in a test run. In any such pursuit, don’t stop the retrieve. Whatever you’re doing obviously has them interested, so keep it moving.

If the fish trails right on the bait’s tail, you might speed up the retrieve a little to simulate a frightened baitfish increasing its pace. Conversely, if you get multiple boils or even a swing and a miss, easing off the throttle might help.

Taking this a step farther, stalling your topwater after a full-on kill strike might just close the deal. Let the bait sit motionless as the froth dissipates and the impact ripples settle. There’s a really good chance that the assailant and his cohorts will be eyeballing what they believe to be a now-wounded baitfish. Give it a few seconds and when you resume the retrieve, you’ll want to be holding on tightly, as the follow-up attack is usually a real paint-chipper.