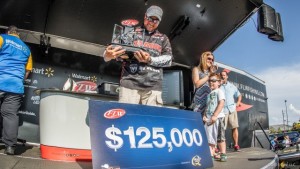 EUFAULA, Ala. – The Walmart FLW Tour event at Lake Eufaula presented by Quaker State promised a dramatic finish Sunday as all of the final top-10 anglers competing on the final day were within striking distance of first place and the title of Lake Eufaula Champion. When the scales settled, it was veteran pro Bryan Thrift of Shelby, North Carolina, who had caught enough weight to earn the fourth victory of his career.

Thrift’s final-day catch of five bass weighing 15 pounds, 5 ounces gave him a four-day total of 69-14 and the win by a 2-pound, 15-ounce margin over day three leader Troy Morrow of Eastanollee, Georgia. Thrift beat out 149 of the best bass-fishing anglers in the world and claimed the first place prize of $125,000.
“I wanted to win this tournament worse than I have ever wanted to win one in my life,” said Thrift, who pushed his career earnings to more than $1.6 million in FLW competition. “Lake Eufaula is my favorite lake and I absolutely love coming here because it fits well with my style of fishing. I like to run and gun, make three casts, then pull up and go somewhere else. And there are a lot of big fish here. I finished second in the last two major Tour events here so I wanted to win on this lake very badly.
“I fished harder this week than I ever have before,” Thrift continued. “I put 30 hours in three days of practice on my new Evinrude G2 outboard. I sat on my butt for three days just idling and looking and marking – not even fishing. I had around 200 waypoints coming in to this tournament and I was just hoping that I would be able to fish them and come across five good ones each day. The key for me was just covering a lot of water and fishing as much as I possibly could.”
After catching a 7-pounder on day one, a 6½-pounder on day two and two 5-pounders on day three, Thrift seemed to be on the big fish pattern necessary to methodically work his way to the top of the leaderboard. Despite his lack of a kicker on Sunday, Thrift said he still managed to grind out eight keepers on an unnamed swimbait and a frog, to seal the win.
“I figured someone would catch a big limit today and that I didn’t have enough to win,” Thrift said. “I never got that big bite today like I had been all week, but I can’t complain. I’ve had an awesome week.”
Thrift’s win moved him up to second place in the 2015 FLW Tour Angler of the Year race with just two tournaments left. When asked if he thought that anyone could catch leader Wesley Strader, Thrift said that it is going to come down to the last tournament of the year.
“The AOY race is going to go to whoever has had the best year of their entire career,” Thrift said. “Our next stop, Lake Chickamauga, is Wesley’s home lake. Everybody is going to have to hold their ground, because we know Wesley is going to catch them. It’s going to be a super-tight race and going to come down to the last fish weighed in at the last tournament on the Potomac River.”
The top 10 pros finished the tournament:
1st:          Bryan Thrift, Shelby, N.C., 20 bass, 69-14, $100,000 + $25,000 Ranger Cup Bonus
2nd:         Troy Morrow, Eastanollee, Ga., 20 bass, 66-15, $29,789
3rd:          Clent Davis, Montevallo, Ala., 20 bass, 66-1, $24,822
4th:          Wesley Strader, Spring City, Tenn., 20 bass, 63-1, $19,855
5th:          Jeff Gustafson, Keewatin, Ontario, Canada, 19 bass, 62-15, $18,862
6th:          Randy Haynes, Counce, Tenn., 20 bass, 60-1, $17,869
7th:          Shinichi Fukae, Palestine, Texas, 20 bass, 57-12, $16,875
8th:          Zack Birge, Blanchard, Okla., 20 bass, 57-12, $15,882
9th:          Adrian Avena, Vineland, N.J., 20 bass, 56-9, $14,889
10th:        John Cox, DeBary, Fla., 20 bass, 55-6, $13,895
Complete results can be found at FLWFishing.com.
Overall there were 49 bass weighing 124 pounds, 7 ounces caught by pros Sunday. Nine professionals weighed in five-bass limits.
Keith Honeycutt of Temple, Texas, won the co-angler division and $25,000 Friday with a two-day total of 10 bass weighing 22 pounds, 12 ounces, followed by Hiroyuki Watanabe of Shizuoka, Honshu, Japan, who finished in second place with 10 bass weighing 22 pounds, 12 ounces worth $7,448.
The Walmart FLW Tour stop on Lake Eufaula presented by Quaker State was hosted by the Eufaula Barbour County Chamber of Commerce. It was the fourth of six regular-season events in the FLW Tour’s 2015 season. The fifth FLW Tour event of 2015 will be held at Lake Chickamauga, June 11-14 in Dayton, Tennessee, and is presented by Igloo. The event will be hosted by the Rhea Economic and Tourism Council. Boats will launch from the Dayton Boat Dock in Dayton. For a complete schedule, visit FLWFishing.com.
In addition to casting for top awards of up to $125,000 cash in the pro division and up to $25,000 cash in the co-angler division, anglers are also competing for valuable points in hopes of qualifying for the 2015 Forrest Wood Cup, the world championship of bass fishing. The 2015 Forrest Wood Cup will be in Hot Springs, Arkansas, Aug. 20-23 on Lake Ouachita and is hosted by Visit Hot Springs. The Forrest Wood Cup Champion could win as much as $500,000 – professional bass-fishing’s richest prize.
Coverage of the Lake Eufaula tournament will be broadcast in high-definition (HD) on NBC Sports Network (NBCSN) October 19 from 7 p.m.-8 p.m. ET when Season 20 of “FLW” returns this fall. The Emmy-nominated “FLW” television show airs on NBCSN, the Pursuit Channel and the World Fishing Network and is broadcast to more than 564 million households worldwide, making it the most widely distributed weekly outdoors-sports television show in the world.
For complete details and updated information visit FLWFishing.com. For regular updates, photos, tournament news and more, follow us on Facebook at Facebook.com/FLWFishing and on Twitter at Twitter.com/FLWFishing.
ABOUT FLW
FLW is the industry’s premier tournament-fishing organization, providing anglers of all skill levels the opportunity to compete for millions in prize money nationwide in 2015 over the course of 240 tournaments across five tournament circuits, four of which provide an avenue to the sport’s richest payday and most coveted championship trophy – the Forrest Wood Cup. FLW tournament fishing can be seen on the Emmy-nominated “FLW” television show and is broadcast to more than 564 million households worldwide, making it the most widely distributed weekly outdoors-sports television show in the world. For more information about FLW visit FLWFishing.com and look for FLW on Twitter, Facebook, Instagram and YouTube.