AdvancedAngler On the Water with Guest Host Greg Hackney 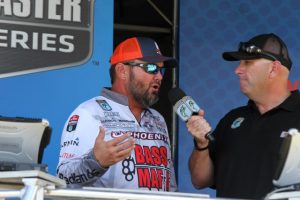 Our AdvancedAngler On the Water Series is an instructional series designed to allow the fans of the sport to watch as someone tries to unlock a body of water.  In most cases, our managing editor is fishing on Neely Henry, but this time, we get to watch as Bassmaster Elite Series pro Greg Hackney works to figure out a pattern in early fall on Barkley Lake in Tennessee.

The “Hack Attack” was filmed on action cameras from three angles as he put his boat on the water for the first time without having been on the lake before and was given three hours to figure out a pattern.  In this video you’ll get to see Hackney puzzle his way through until he connects with the fish.  He talks his way through the process, describing his thoughts as he unlocks the pattern for the day, and then gives a narrative at the end. He uses a shallow running Strike King KVD 1.5S squarebill on a Quantum KVD Cranking Rod and Reel with 17-pound-test Gamma Fluorocarbon in this episode.

Editors note, this was our first taping of the AdvancedAngler On the Water Series, and our initial vision was to do it all on action cameras, so there is some wind noise that we have not been able to edit out.  Our apologies for that, but the information and Hackney’s execution are well worth it.

Please enjoy AdvancedAngler On the Water with Greg Hackney