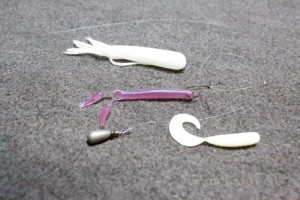 I don’t know about you, but this is one of my favorite times of the year to fish. Sure, the springtime bite can always be good when it comes to catching fish. However, the moment that the bass’ attention turns to spawning, I must admit getting a little turned on myself.

No, I’m not some sort of a freak, but sightfishing itself quite possibly may be my favorite way to catch a bass. I genuinely love Flippin’, and Frog Fishing is a blast too. But, when those fish get on the nest, and it becomes a battle of wills between me and the bass; I get charged up.

I wanted to cover some of the things that make sightfishing a lot more fun and productive. Some of it is tools and equipment related, but also a little about the approach.

Let’s start with the gear.

The Arsenal
Let’s just sum it up by saying that when you are sightfishing, variety is the spice of life. By the end of a day of sightfishing, I may have 20 rods on 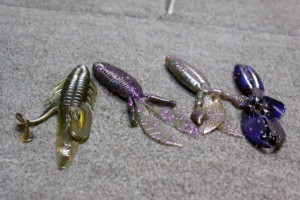 the deck of my boat, and they all have something different rigged on them. My basic rule of thumb on sightfishing is that if I think it might work, I need to try it.

My typical sightfishing choices vary from the natural to the absurd. I truthfully prefer to use natural colored lures in beds because so many people use white, but I sometimes put one spot of a bright color near the hook with dye or paint so that I can see the lure in dirty water or algae. Although I will admit, I do use a lot of white baits on bedded fish. I even have bright chartreuse and florescent orange lures that I use.

I like to have a selection of lures that represent a variety of “critters” when I go bed fishing. I also like to keep a selection of different sizes at the ready as well so that I can try and agitate different sized fish with lures that match their sizes. I’ve often found that a large female; one over five pounds, is more likely to take over protection if the male can’t make a large intruder leave the nest. so, I keep different sized offering ready. 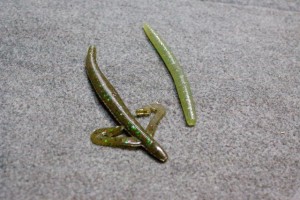 For my smaller lures, I like things like a Missile Baits Drop Craw, a 3 1/2-inch tube, and I will even go as small as a crappie tube or 2″ crappie grub like a Bobby Garland, Big Bite Baits and Mr. Crappie rigged on a drop shot or a darter head with size 1 hook in it. Of course I throw all of these on spinning gear, usually with 10 to 15-pound test Superline and a eight to 10 foot leader of eight-pound-test fluorocarbon.

These offering are usually used when the fish is really tough to get to react, or when a big bait agitates it, but it won’t bite, I turn to this and they often snap it up in frustration. I do tend towards these smaller offerings a lot on smallmouth and spotted bass – especially on deeper beds – because they can be aggressive enough that they suck it in within minutes. Or, these fish have a real

tendency to bite a worm behind the hook, so you lose a lot of baits before the fish takes the whole thing in its mouth

Baits in the three to six-inch range can create a reaction from just about any size bass. This bait selection can include, creature baits, craws, small 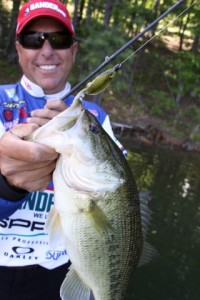 Dean Rojas and His Warmouth

swimbaits, bluegill imitations, stickbaits etc. In these instances, I prefer to use Texas Rigged soft plastics on the bed, and I like to pick baits that allow me to use a large a hook as possible to put the hook point as far back in the body as possible.

Bombs and Missile Craws. I also like a Berkley Havoc Slop Craw on beds because it is compact yet allows me to put a 5/0 straight shank hook in it, and the claws do not extend very much past the hook. Lizards are a great choice on beds as well, and I tend to stick to standard six-inch styles with a large hook in them as well.

One deadly bed fishing lure that I wanted to address specifically is the Big Bite Baits Warmouth, designed by Dean Rojas specifically for fishing bedded bass . This bait can be absolutely killer on beds, and it is designed to be rigged through the side with a wide gap hook. Because it is rigged flat, if you peg the sinker to the lure, it will spiral and you cannot present the lure precisely. Make sure to leave the sinker free when rigging and you will have no problems.

Speaking of hooks. I have learned from experience that I do not like wide gap hooks larger than 3/0 size on bedded fish (or any other time). Here is why. I have had several fish strike a large wide gap hook and take the bait into their mouths, only to set the hook and have the lure shoot out of their mouths. What I have found is that the large gap of those wide gap styles gets folded under when the lure is in a bass’ crusher muscles, and it causes the hook to slide out sideways.

I prefer straight shank hooks or offset round bend hooks whenever possible because of this. There are some baits that require a large wide gap style hook and on 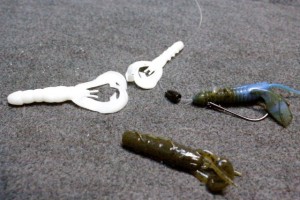 those I will open the hook point

slightly or use a pair of pliers to bend the point to the side to try and increase hooking percentage.

Large and Specialty Baits
This is probably my most favorite category. I really like big lures on beds when dealing with larger females. From my experience, there are times 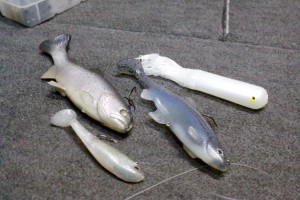 when a large female watches a male bass struggle to deal with a bait, or refuse to because of its size; she will assume primary protector role.

For that reason, I carry six to eight-inch swimbaits like Rago Baits, Huddlestons or Ospreys, a River2Sea NestRaider 190, which is a giant waterdog bait I helped design a few years ago specifically for bedfishing. Large tubes like Tora Tubes, Jerry Rago Top Hook Bluegills, River2Sea

Live Eye Bottom Walker 120 and 150’s and even a six-inch Bull Shad swimbait is available.

My hope with these is that they will just be used as triggering lures, and that I can get them fired up with these lures and switch to something more efficient to close the deal. Larger lures are heavier and can cause lost fish from time to time. While that is my preference, there are times that the only thing they will strike is a large lure, so you swing and hope for the best.

Frogs
It may seem unusual to some, but floating hollow bodied frogs can be deadly on bedding bass. If you figure out the right conditions, bass will come to the surface and blow up on a frog. We have a feature article with Dean Rojas coming up next week to detail the whole program, but they can be extremely productive.

Jigs
I am not much of a fan of using jigs on a bedded bass. While they can be efficient for hooking and landing, they can also be a source of frustration at times. Bass get so conditioned to lures this time of the year, and they will often pick up a jig by the skirt material and never get the hook in their mouth. Of course there are times that they work well, but I prefer to only use a jig to agitate fish as well. 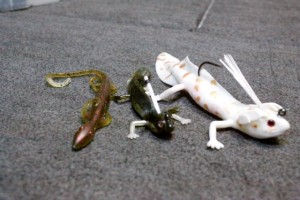 Nest Raiders and a Lizard

I will tie a 1/2 to 3/4-ounce jig on and use it to bump or ram the fish with in an effort to upset it. If a fish seems uninterested, but won’t leave the bed , then I pitch a heavy jig and trailer out past it – preferably directly behind the fish and use the jig to bump, rub or thump the fish to try to make it respond. Fish will often move from completely ignoring your offering to acting like the Hulk in a few seconds after getting bumped a few times.

Specialty Tricks and Tools
I will never own a boat again without a pair of Power Poles. They have several uses not related to sightfishing, but they are at their ultimate when fishing for bedding bass. Having the ability to anchor in an exact position and concentrate solely on the fish. Additionally, the C Monster system allows you to lift the poles individually so that you can adjust your positioning slightly and then reestablish position and stability by dropping that pole down again. 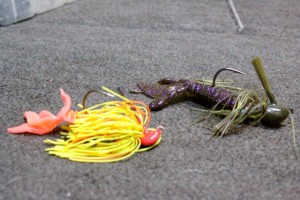 That leads me to boat positioning. As a rule of thumb, you want to keep yourself far enough away so that you can see the fish, but the fish does not necessarily feel uncomfortable with you sitting directly on top of it. If you are too close, you will notice that the fish will tend to back away from the bed or leave and not come back until you leave yourself. However, if a fish swims a circle and returns, there is a strong chance that you will be able to catch that fish given enough time.

There are times however that fish are not bothered at all by the presence of a boat. This is especially true on deeper beds, but at times even in shallow water as well. If I’ve been working a fish for a while, and I feel like I have no chance of catching it with traditional methods, I will often move close to the bed and try to vertically hop the lure right on top of the nest in front of the fish if it stays on the nest. There are times that the annoying vertical hopping will be enough to turn a passive fish into an aggressive one, but this type of approach is a last resort.

One trick that you may have seen on tour level events and wondered is to use a solution of water and dishwashing soap to clear pollen away from atop the nest. I like to fill a gallon jug with about two inches or less of Dawn dishwashing soap and the rest with water; then shake it up to mix. I then fill a Super Soaker squirt gun and if there is sawdust, pollen or algae on the water, I squirt it on the nest. This causes the debris to disperse, giving you a clear view of the nest. 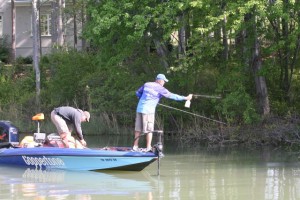 Spray to Clear the Pollen

Another thing this solution does is smooth out the ripples on the surface caused by light breezes. If the wind is blowing and you are struggling with those tiny choppy ripples that resemble static on a television, spraying this over the nest will help smooth out those ripples some. It won’t flatten waves but it will smooth them out so you can see more clearly. You can also spray a slick of it, and follow it with the wind down the bank while you are searching for beds. There used to be a product called Slick It that was better than the soap mixture, but that is off of the market now.

I hope this helps you catch more fish off of the beds. However, remember that this is an important time of the year for keeping bass populations healthy. If you are practicing methods and catch one, please release fish immediately on the nest before leaving the area. Keeping either of a pair jeopardizes the nest, and while fishing bedded bass has been scientifically proven to not have an adverse effect on the overall health of the bass population in a lake, we should give it every chance to flourish.