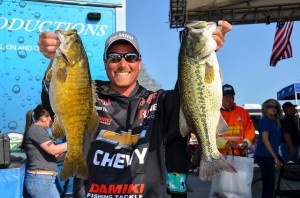 ROGERS, Ark. (April 10, 2014) – After winning the Walmart FLW Tour event at Sam Rayburn Reservoir just two weeks ago, Chevy pro Bryan Thrift picked up right where he left off and brought a five-bass limit to the scale weighing 16 pounds, 2 ounces to grab the lead after day one of the Walmart FLW Tour at Beaver Lake presented by Rayovac.

The Shelby, N.C., native now holds a slim 13-ounce lead over pro Spencer Shuffield of Bismarck, Ark., heading into day two of the four-day event, hosted by Visit Rogers, that features 173 of the world’s best bass-fishing anglers competing for a top cash award of up to $125,000.

“After the win at Rayburn, it gave me the confidence to really slow down and fish the places where I feel that fish should be,” said Thrift, who previously won an FLW Tour event held at Beaver Lake in 2011. “I think confidence definitely plays a key role in tournament finishes. I didn’t have a very good practice here, so today I just went fishing with an open mind. It takes some of the stress off of me and I can get out there and have some fun.”

Thrift brought a mixed bag of bass to the scale consisting of one largemouth bass, one spotted bass and three smallmouth bass. He said his key bait was a 1/8-ounce shaky-head rigged with a 6½-inch Damiki Finesse Miki.

“My morning started out pretty decent,” Thrift said. “I had a 7-pound limit by 9 a.m. Then I started running around and caught a few big ones. It was pretty spread out throughout the day. I probably fished 40 or 50 places today and caught around 12 or 13 keepers. I’m running up and down the lake burning 25 to 30 gallons of fuel a day.

“I’m not on any kind of pattern or area,” Thrift went on to say. “I like to have a place where I know that I can pull up and catch a couple. Unfortunately, I don’t have that here. Tomorrow I’ve just got to go fishing and let the cards fall where they fall.”

Scott Wiley of Bay Minette, Ala., won the Big Bass Award on the pro side Thursday with a fish weighing 6 pounds, 15 ounces to win $500.

Fans will also be treated to the FLW Expo at Walmart on Saturday and Sunday from noon to 4 p.m. prior to the final weigh-ins. The Expo includes Ranger boat simulators, the opportunity to interact with professional anglers, enjoy interactive games, activities and giveaways provided by sponsors, and fans can learn more about the sport of fishing and other outdoor activities. The first 150 children 14 and under who are accompanied by an adult will receive a voucher to redeem for a free rod and reel combo courtesy of KNWA each day after the final weigh-in. On Sunday, country music superstar Rodney Atkins will perform a free live concert on the Walmart weigh-in stage at 3 p.m. All activities are free and open to the public.