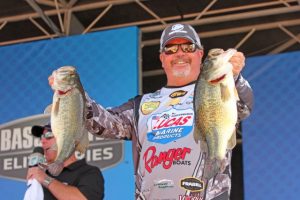 In case you weren’t paying attention yesterday, John Murray won the Bassmaster Elite Series event on Toledo Bend Reservoir on the border of Louisiana and Texas.  The story will read that the Spring City, Tenn. pro came from four pounds back and beat second place finisher Jason Christie by almost five pounds.

It was a lot farther back than that.

If you don’t know his story, Murray is one of the most accomplished anglers to ever come out of the Western United States.  When he made his move to fish the National tournament circuits, The Phoenix, Ariz. native had won 31 bass boats in competition; at least one on every major tournament body of water in the West, and most of the minor one’s as well.  Among those victories are two U.S. Opens; which he won before the event became a shared weight format.  All told, Murray has earned more than $2-million casting for bass across the country.

In truth, when you mention the name John Murray to anyone from the West, we view him as our own Rick Clunn. While Clunn is the man that a whole generation of anglers nationwide look to as their inspiration, Murray is the same for us who came from the West.  His excellence and dominance in the Western professional circuits was the stuff of lore; and we all looked up to him. 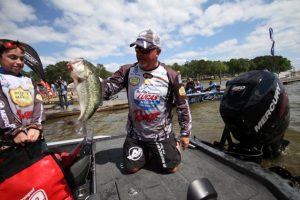 However, to those of us from the West who are blessed to truly know him, and make our living in the fishing industry, he is more like a big brother, or an uncle than a competitor.

Murray’s fingerprints are all over the careers of just about every professional angler who has ever come out of the West.  He was Byron Velvick’s roommate in the West, and while traveling the Bassmaster Elite Series, he rooms with Skeet Reese, he has been a key helper to the likes of Brett Hite, Aaron Martens, Fred Roumbanis, James Niggemeyer, Ish Monroe, Brent Ehrler and just about every other Western pro of any consequence.

Murray has always made himself available and helped however he could. Whether it was how to navigate the roads and get from event to event, or how to be able to compete nationally and still maintain a connection to home.  In Reese’s case, as he has publicly said, it was Murray who taught him how to be a professional angler.  He often did it all at to his own professional detriment at times.

While many anglers run roughshod on the water, Murray is cautious and considerate.  Many times throughout his career, Murray has found a school of fish, only to have another angler locate it only because he sees Murray catching them, and begin to crowd him.  Instead of starting a melee on the water, Murray will pull up stakes and just leave the area to the angler to avoid any unpleasantness. 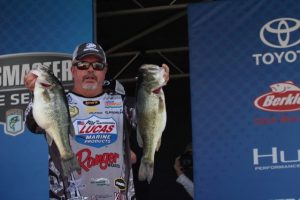 The last time Murray won a B.A.S.S. event was in 2004, when he won the 2004 B.A.S.S. Shootout on Virginia’s James River.  Since that time, Murray has qualified for four Bassmaster Classics, has finished in the top 10 eight times – three of those in the top five – and won hundreds of thousands of dollars.  However wonderful that list of statistics would be for most any professional angler, to Murray, with his list of credentials, they are pedestrian, and he has not been satisfied.

Even more than being dissatisfied, he often voiced thoughts that his window had passed, he lamented at the amount of times that he missed out on paychecks by ounces, that lost fish cost him spaces in the standings and thereby missed appearances at the Bassmaster Classic, and it had begun to erode on his confidence.

It looked like the pattern was going to continue this past week at Toledo Bend, when Murray came to the scales on day two with an 11-pound, 7-ounce limit after being in 13th place the day before.  However, instead of that slip costing him the cut, it moved him down to the 34th position.

Then the Murray of old appeared.

On Saturday, a 23-pound, 7-ounce bag catapulted him into third place, and Sunday’s 24-pound, 15-ounce clubbing reminded the fishing world of the angler we from the West have known all along.  He had risen to the pinnacle and showed everyone how great an angler he truly is.

The comeback of years was complete.

They say that you can tell how well a person is liked by how many people attend their funeral.  In tournament fishing, the telltale sign happens to be seeing how many competitors stick around to watch how a competitor fares in an event like this.  In the case of Murray, competitors like Reese, Gerald Swindle, Hank Cherry, Jacob Powroznik and more gathered to witness him arrive back at the landing, bag his fish, and weigh-in.  His fellow pros in the Elite 12 yesterday did as well, anglers like Hite, Randy Howell, Casey Ashley and Brandon Palaniuk all came from behind stage to watch his moment in the sun. 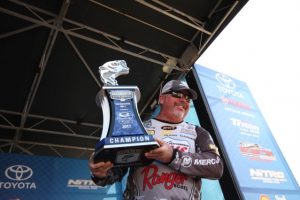 In that moment, as rookie Jamie Hartman’s weight fell short, and Murray was crowned champion, the true character of the man was displayed.  He reached for his competitor, grabbed him around the neck and said something to him privately before he turned to the crowd and shrugged his shoulders in a typical, “Aw Shucks” kind of response.

Ever the consummate professional, ever the man with a giant heart for people, Murray seemed almost reluctant to share the emotions that had been pent up inside for so long.  That’s alright, the emotions were pouring out across the country on his behalf.

Had the camera panned to Reese, who has shared life on the road with Murray for nearly 20 years, they would have likely captured enough emotion for the both of them.  And, had they panned a camera around fans of the sport from the West, who have long followed and were inspired by his career, or helped by him personally, they would have taken in more.

Last season, when Clunn notched victory at the St Johns River, the outpouring of support and emotion that came from the country was awe striking. Now, we from the West are able to experience our region’s version of that legendary competitor having his moment in the spotlight – holding his own Elite Series Blue Trophy overhead with his wife Amy and son TJ at his side.

Congratulations John Murray for completing that 13-year long comeback you’ve so long sought. But most of all, from all of us from the West you’ve aided, invested in, cared for, instructed, coached, been a friend, a brother and an uncle to – Thank you, for being our very own version of Rick Clunn – you’ve inspired so many.