By now, you’ve likely seen that Major League Fishing has crowned their first champion. In a revolutionary format that pitted 24 angers in head to head competition, one angler came out on top. That angler was Redlands, Calif. FLW Tour pro Brent Ehrler.

Any angler worth his weight in trophies would relish the opportunity to compete against this field. However, with millions of dollars in tournament winnings in the bank accounts of these anglers, the same field might be enough to cause a grown tournament angler to get the shivers. 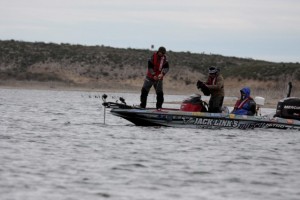 While the field was intimidating, Ehrler has a stacked record himself. He is a seven-time FLW winner. His career wins include the 2004 Everstart Championship and the 2006 Forrest Wood Cup. Being the lone FLW Tour representative amongst 23 Bassmaster Elite Series pros, Ehrler faced not only a hefty challenge, but he also carried the reputation of a whole organization on his shoulders.

With the history of the Bassmaster Tour stretching more than 40 years, the Bassmaster Elite Series has a reputation for being the most respectable and challenging tour in the business. FLW was born out of the Red Man tours, and it quickly gained notoriety as a great place for anglers to make some extra money – great money.

However; in 2005, when the Bassmaster Elite Series was announced, anglers were forced to make a choice between B.A.S.S. and FLW. The increased entry fees of the Elite Series, along with the 11 event schedule made focusing on one tour a necessity.

FLW got a fair amount of Bassmaster Legends in the process; however, most of the sport’s biggest name competitors chose the Elite Series. The result was that FLW got the reputation for being a minor league circuit in comparison to the bright lights of the Elite Series.

Ehrler winning the Jack Links Major League Fishing presented by Busch Beer helps to further put some of that to rest. While the story of his win will be told on Major League Fishing’s website, Advanced Angler wanted to talk to him about the experience, and what it means to him now.

The Experience
Like the rest of the competitors, Ehrler said competing in Major League competition was more stressful than he could have imagined. “The leaderboard really adds a lot of intensity to the competition,” he said. “Hearing what the rest of the anglers are catching and knowing what place you were in made it interesting.”

Ehrler said that he was constantly reminded of how little time knowing that you only had two and a half hours to find and locate fish in each period was the really stressful part. “That one thing put more pressure on me more than anything else,” he said. “The first morning I really found out just how much it really messed with me. I found myself feeling like I had to speed up and it made it really hard to get into a rhythm fishing.”

What it Means
Ehrler said that while the filming of the event was a long time ago, he takes a lot of pride in the fact that he was the first champion in Major League Fishing history. “It means a lot to have won the first one of these,” he said. “To have gone up against a field of anglers like that and to have come out on top means a lot to me; it was a huge accomplishment as an angler.” 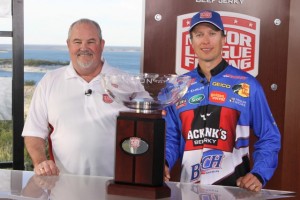 From a business and publicity perspective, he likes to being the champion, and being the only FLW angler in the field. “I’m really looking forward to what this means to me from a fan and an industry perspective,” he said. “We get kind of beat up at FLW for being a lower level circuit, and I hope that the fact I beat all of the Elite Series anglers at MLF really can help people know what kind of an angler I am.”

Going Forward
Ehrler said that having the experience helped him in his first tournaments on the FLW Tour after competing in Major League Fishing. He said that he didn’t find thinking about not knowing the leaderboard didn’t bother him, but another facet was a real asset. “I remember thinking that I had a bunch of time to fish at Lake Hartwell,” he said. “Thinking back to how much tension that the three period format caused really helped me slow down and fish very relaxed each day at Hartwell; I felt like I had a really long time to fish.

“Other than that, it is a really big accomplishment for me in my career, and now that it is public, I’m really glad to be able to share the experience with everyone else.”