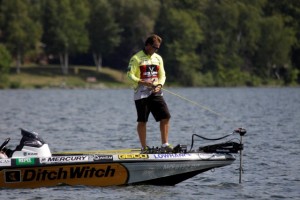 I’ve heard it said that passionate people are those who do the best work.  Being a fan of bass fishing has helped me do my job better.  I am fortunate in that I get to spend a lot of time working closely with the professional anglers that make the news in this sport; so I do get to see a lot.  While one fan might relish the fact that they get to take a picture with one of them as a memory, my memories come in the moments that I cover.

One of those opportunities that will forever be dear to me was being chosen to be part of the editorial team with Major League Fishing.  My duties on the water with MLF give me the chance to witness so much from the 24 anglers who make up the cast of the show.

One of the things I’ve learned in covering now four of the Major League Fishing events is how quickly the best in our sport can locate bass and begin to take in data with which to make adjustments to their fishing plans.  They all have the newest, hottest tackle and gear with which to generate bites, but the fact is, if that gear is not put in the proper places, then bites can be few and far between.

Major League Fishing allows us to see the process of locating fish in its entirety.  Of course, when we watch The Bassmasters or FLW Outdoors, we get the chance to see parts of the process.  When I am on the water at an Elite Series, FLW Tour event, a Bassmaster Classic or Forrest Wood Cup; I see components of the process.  However, much of the data mining has been done in the several days of practice preceding the event, so a basis for decision making has already been established.  With Major League Fishing, we see the whole process unfolding. 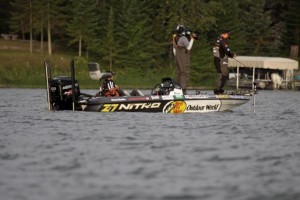 To me, Major League Fishing is kind of like seeing what I believe is the best series in bass fishing come to life.  For many years, Bassmaster Senior Writer Don Wirth has published his “Day on the Lake” articles; and I believe them to be the most significant pieces in the sport.  Those articles have given us a glimpse into the most important part of being a successful angler; finding the bass.

A day on a Major League Fishing body of water is kind of like putting one of Wirth’s articles on steroids.

While Major League Fishing is the source for this piece, I don’t intend for this to be all about the format of the events.  This piece is about the anglers, and how the format brings out the best in their skillsets.

Obviously, the search for bass begins with some basic understanding where bass are at a specific time of the year.  Each region of the country differs as to when the seasons begin to change, but while individual characteristics can be different, the basic needs of the bass are the same.

In the spring, their lives are dominated by the spawn.  They are either on their way to it, in it, or on their way back from it.  The summer and fall is about feeding, and winter is all about surviving.  The best pros in the business know these phases and can build their plans around it. 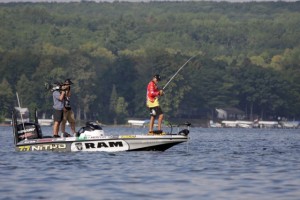 So much is made about the lure, or specific tools that win the big tournaments.  While they are important, the decisions and adjustments made are the real story of how tournaments are won.  Of course the tools used factor into the whole picture of a championship, but the oft forgotten pieces of the puzzle are the how, where and why; while the what gets the attention.

We’ll take a look at some of the practices of the pros, and begin discussing how it can impact our own search for bass

Map Study
There are many more resources available to  us today, and perhaps the most important piece is cartography.  With today’s fishfinders and the advent of Navionics and Lakemaster mapping chips, we can see so much of what we need to see on the water by looking at our graphs.

But, that doesn’t mean we shouldn’t study more.  While electronic maps dominate, some of the pros still carry paper maps and begin their practice research by pouring over them looking for things that can be the anomaly that could hold the winning catch.  Most of those things can now be found on mapping chips, and many of the pros pour over those maps; either on their fishfinders, or on mobile versions of their mapping that allows them to transfer or mark those locations on their fishfinders for exploring.

In Major League Fishing, the study time typically amounts to an hour or less before takeoff, and the exploration of those areas is reduced to their 15 minute ride around the hole or lake prior to the first casts being allowed.  The anglers combat this by finding likely areas and fishing them quickly, but for the most part, they all look for one thing to expedite locating fish. 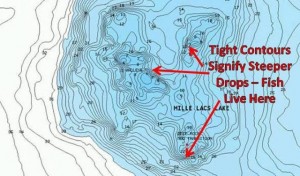 Follow the Contours
One thing I’ve noticed when following the pros is that they rarely troll straight down a bank hoping to find some fish that bite.  When they are doing their map study – depending on the tie of the year of course – they most often look for areas that have tight contour lines next to some sort of structural feature.

Even during the periods when bass are shallow, professional anglers seek structural features on their fishfinders and they follow the depth range that they find activity in.   What you will see is them staring intently at their screen, only looking up to make casts, then turning their attention back to their fishfinders in order to keep the boat’s path on the contour lines.

By working along these contour lines, the angler gives themselves the best chance at contacting a school of fish that can give them the most feedback, or produce the right amount of fish to put them in position to win.

Advanced Angler will be spending some time this fall and winter working with some of the pros in a concerted effort to provide readers with a sort of comprehensive manual / resource guide that includes in-depth looks at seasonal patterns of bass, ma study and location as well as the best ways to locate fish quickly.

As always, our motto is to help Elevate Fishing to the Next Level, and we want to help all of you find fish faster, so that you can begin catching more.