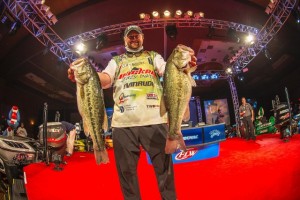 ROGERS, Ark. (April 12, 2014) – FLW Tour pro Matt Arey of Shelby, N.C., brought the largest five-bass limit of the entire tournament to the scale Saturday weighing 16 pounds, 4 ounces to grab the lead after day three of the Walmart FLW Tour at Beaver Lake presented by Rayovac. Arey’s three-day total of 15 bass for 43 pounds, 10 ounces gives him a 2 pound, 8 ounce lead over second-place angler Livingston Lures pro Andy Morgan of Dayton, Tenn., who has a three-day weight of 15 bass worth 41-2 as the tournament heads into the final day. Only the top 10 pros will advance to the final day of competition in the four-day event, hosted by Visit Rogers, that features 173 of the world’s best bass-fishing anglers competing for a top cash award of up to $125,000.

“It’s great to be leading, but I’d almost rather be one ounce behind in second place so I wouldn’t have to deal with the pressure,” said Arey, who has two previous top-5 finishes at Beaver Lake in FLW Tour competition. “I’ve never been leading a big event going into the final day, but I’ve never felt as good as I do right now about a tournament in my life.”

Arey said that he has been starting out each morning fishing near Prairie Creek, then moving up the White River and targeting the staging prespawn largemouth.

“My fish are replenishing,” Arey said. “I’m catching fish off of the exact same transitions where I caught them in previous days and they’re solid white, so I know that they are just coming up. I’ve had most of my weight by 11 a.m., but I’ve been trying to sustain that mid- to low-teens average because that is pretty good this time of year. I’ve got a little bit of a pattern, but it’s only working in a few select areas.

“I’ve been averaging seven or eight keeper largemouth each day and four to six keeper spotted bass,” Arey continued. “Of the 15 bass that I have weighed in, 14 of them have been largemouth. It’s not a big secret – I’m catching most of my fish on a jig. I’m rotating between two or three different baits, but the jig has been key for me.”

“I’m going to do the same thing tomorrow,” Arey went on to say. “I’m going to start near Prairie Creek and hopefully catch a few fish early to help settle the nerves. Then, I’m going to work my way up the river and just pick it apart. I’m going to pound it tomorrow and I know that I have to catch them again.”

“When it’s your time to win, it’s your time,” said McDonald, who has three career wins as a boater on the Walmart BFL circuit. “I fished flawlessly this week. I lost no fish, and I really caught quality fish. A 3- or 4-pounder will take you a long way in this tournament.”

McDonald said he that his key bait this week was an Obsession Lures jig, but he also caught fish on a Yamamoto Senko.

Overall there were 53 bass weighing 89 pounds, 2 ounces caught by co-anglers Saturday. Two co-anglers were able to boat a five-bass limit.

Anglers will take off from Prairie Creek Park located at 9300 N. Park Road in Rogers at 7 a.m. on Sunday. Sunday’s final weigh-in will be held at the John Q. Hammons Center located at 3303 Pinnacle Hills Parkway in Rogers beginning at 4 p.m.

Fans will also be treated to the FLW Expo at Walmart on Sunday from noon to 4 p.m. prior to the final weigh-ins. The Expo includes Ranger boat simulators, the opportunity to interact with professional anglers, enjoy interactive games, activities and giveaways provided by sponsors, and fans can learn more about the sport of fishing and other outdoor activities. The first 150 children 14 and under who are accompanied by an adult will receive a voucher to redeem for a free rod and reel combo courtesy of KNWA each day after the final weigh-in. Also on Sunday, country music superstar Rodney Atkins will perform a free live concert on the Walmart weigh-in stage at 3 p.m. All activities are free and open to the public.