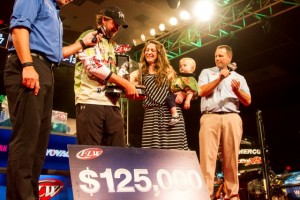 Arey’s winning stringer gave him the win by a 1-pound, 9-ounce margin over Livingston Lures pro Andy Morgan of Dayton, Tenn., who caught a total of 20 bass weighing 57-10 and earned $30,000.

“The key for me this week was the jig pattern,” said Arey, who earned the first professional victory of his career since winning the Forrest Wood Cup as a co-angler in 2006. “I noticed in practice that the water level had come up quite a bit and I figured that during the tournament it would be falling. So I tried to fish areas that I thought were more consistent and not as affected by the weather.

“I knew the fish were wanting to spawn, so I keyed in on spawning areas,” Arey continued. “I was catching them on rock transitions from the mouth of the spawning pockets all the way back. My bait was a small green-pumpkin-colored finesse jig with a green-pumpkin Wackem Baits twin-tailed trailer. I used three different sizes, depending on the wind.”

Arey said that he loves fishing Beaver Lake each year and that the White River impoundment is his favorite lake in the country.

“I love these natural Ozark lakes because you can read the shoreline,” Arey said. “I also love this place because it features all three species of bass. It’s almost like saltwater fishing. When I set the hook I don’t know if I’m catching a 3-pound spotted bass, a 3-pound smallmouth or a 3-pound largemouth.”

When asked if this win compared at all to his win as a co-angler at the Forrest Wood Cup, Arey said there was no comparison.

“It’s not even close,” Arey said. “This one is special. I’ve been flying under the radar and I’m cool with that because I’m making my living by doing what I love. But winning events of this caliber, the biggest events in the world, can make you a household name in fishing. Lake Murray and the Forrest Wood Cup this year are only two hours from my house. I don’t have a whole lot of experience on it in the late summer, but I definitely will if I can make it.”

Overall there were 50 bass weighing 140 pounds even caught by pros Sunday. Each of the final 10 pros brought a five-bass limit to the scale.

The FLW Tour stop on Beaver Lake presented by Rayovac was hosted by Visit Rogers. It was the fourth of six events in the Walmart FLW Tour’s 2014 season. The fifth Walmart FLW Tour event of 2014 will be held at Pickwick Lake June 5-8 in Florence, Ala., and is presented by Straight Talk. The event will be hosted by Florence/Lauderdale Tourism, and boats will launch from McFarland Park in Florence. For a complete schedule, visit FLWOutdoors.com.