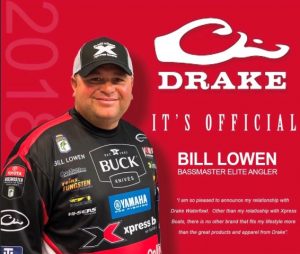 Simply put, Bill Lowen knows how to take home a limit. He’s finished “in-the-money” 88 times over his tournament career, including 17 times in the Top 10. Enough, in fact, to earn him the nickname “Dollar Bill” Lowen. When he’s not stacking green-backs on the water, however, he’s been known to knock down a limit of green-heads from the blind.

“Drake is extremely honored to be partnering with Bill Lowen. Not only is he one of the top Elite Series anglers in the U.S. today, but also an extremely avid waterfowl, big game, and turkey hunter when he’s not on the water. It’s truly an ideal relationship for both of us,” said Drake Co-Founder Tate Wood.

It’s no secret that many Elite Series Anglers climb into a duck blind or tree stand for a huge chunk of their offseason.  Spending time in the field was typically regarded as a way for anglers to escape the rigors of competitive fishing.  However, cutting-edge hunting brands–like Drake—have taken notice that many elite anglers approach hunting season with the same passion as their time on the water.

“Bill’s career, life, and passions align perfectly with our mantra of “Always in Season” and the features and quality of our apparel lines deliver at a performance level a pro like him expects and demands,” Wood added. “We couldn’t be more excited about the future between Drake and Bill Lowen.”

“Tough conditions demand maximum performance,” said Lowen. “As a life-long waterfowl hunter and professional angler I put myself in some of the worst weather conditions out there. Drake lets me go even when Mother Nature says ‘No!’ ”

An iconic brand like Drake giving the sponsorship nod to a top-tier fisherman such as Bill Lowen could signal continued opportunities for dual-threat anglers down the road. As they add their name to a surprisingly short list of hunting sponsors, more companies may begin to take note of the personality, influence, and passion tournament anglers can bring to their brands.

Based in Olive Branch, MS, Drake manufactures, markets, and sells high-quality outdoor apparel to avid hunters throughout the United States. Drake built their namesake by catering to the waterfowl market through Drake Waterfowl Systems, but expanded to meet hunters’ needs in every season through their Non-Typical, Ol’Tom, and Drake Clothing Company brands.

More information about the company can be found at www.drakewaterfowl.com.

Based in Brookville, IN,.  He’s a nine-time Bassmaster Classic qualifier with over $1M in career earnings.  Lowen is one of the original members of the prestigious Bassmaster Elite Series, which began in 2006.

More information about Lowen can be found at www.billlowen.com.