Mike Iaconelli and his loving family stood on the dock under a photogenic Lake Conroe sky wearing wigs to have a little Halloween fun as a fan approached for an autograph on the final dayâ€™s launch of the Toyota Texas Bass Classic.

Was this a cruel Halloween joke? No. The man simply wanted Ikeâ€™s autograph. And Ike gladly obliged. Surely, the fan never realized that once again Ike was sitting in second place, and his photos were serving as pumpkin smashing reminder that if Ike canâ€™t run down T.T.B.C. leader Keith Combsâ€™ four pound advantage today â€“ that Conroe could once again feel like a trick, rather than a treat. 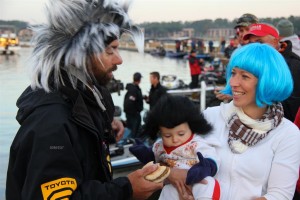 Combs reportedly has well over 40 different spots that heâ€™s capable of catching a fat keeper from, while Iaconelli has just three, one of them being Ikeâ€™s primary honey hole. â€œItâ€™s wild,â€ said Iaconelli. â€œIâ€™ve got such a little area, but itâ€™s a magical area. Itâ€™s a funnel. These big bass are coming in there to eat at different times of the day,â€ said the 2006 Toyota Tundra Bassmaster Angler of the Year.

â€œI donâ€™t know what it is about me and Lake Conroe, but for whatever reason I have a special relationship with this place,â€ reflected Ike, when asked about the numerous fish heâ€™s caught over five pounds here both last year, and this week.

Last year, Ike scored big with a spinning rod. This year the spinning rod and shaky head never got the nod. Instead, Iaconelli, who lives 25 hours from Conroe, and knew nothing about the famed Texas reservoir until last year, has wrecked fat schools of largemouth this week with shad colored Rapala DT10 crankbaits on baitcasting equipment.

Before Ike finished off a breakfast muffin, and kissed his wig-wearing posse goodbye prior to pushing away from the dock for morning blast-off, he signed the final duplicate photo in the fanâ€™s folder. But he signed that shot differently than the previous copies. He signed his name, of course, and then he printed â€œNo More Second Places.â€ He read those four heavy words loud enough to let all within earshot know that beneath the playful wig, he was highly mindful that today could bring a Conroe treat, or a really cruel second place trick.