Get the Most from Your Boat

10/31/2011 – Touring professionals all have several pieces of equipment that are absolute must haves if they want to compete. Rods, reels, line and lures are all in the necessity category if you want to cast for a living. Another set of necessities involve their floating offices; outboards, trolling motors, electronics and even storage for tackle and equipment all fall under the umbrella of their boats.

Without a modern bass boat, the touring pro is at a distinct advantage. Most of the pros on tour today operate 20 or 21 foot fiberglass rocket ships powered by 250 horsepower outboard engines. Most of them have a vast array of electronic accessories on board. Some have four fishfinder / GPS / space aged big screened virtual brains that help them locate fish and structure. Some of them have fish activator units like the Hydrowave attached as well as Power Poles; hydraulic jack plates and the list goes on.

Without an efficient bass boat, the touring pro is at a major disadvantage to his competition on the water. However, there is also the thought of their pocketbooks as well. An inefficient rig can become not only a drag on the water, but on the pocketbook as well.

When an angler burns several hundred gallons of fuel through their outboard in a season, maximizing the efficiency of the boat is one area that an angler can help their pocketbook. While keeping the engine operating at peak efficiency can save money on the annual fuel budget, it can also mean a little extra money in the pocket at the end of the year when the pro sells his boat.

When a buyer finds out that the angler in question is meticulous about the care of their vessel, they are often willing to pay a little more for a boat that has been kept care of, and not treated like a rented mule. 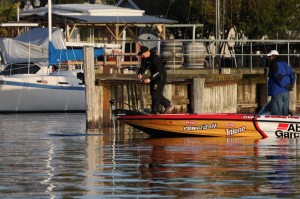 Two anglers who just completed their sophomore season on the Bassmaster Elite Series took their first year’s experience and learned to maximize the use of their floating offices. Bradley Roy and Cliff Crochet have proven that they can operate at peak efficiency; save themselves money and worry about their outboard less on the water.

While they both have their own special considerations, three areas they both concentrate on are tackle load, propeller maintenance and fuel.

Tackle Load
Both anglers agree that keeping an efficient load in the boat leads to peak efficiency, but they both go about it in different ways. While Cliff Crochet seeks to keep gear to a minimum, Roy believes in evaluating his load. “I try to keep myself from putting more in the boat than I need,” said Crochet. “If I have practiced and I know what I’m going to be doing for the event, there’s no reason to overload my bins with stuff I know I won’t need.”

While Crochet is known to live primarily in the shallows, Roy tends to be more of a versatile angler and has to keep a little more tackle in his boat to be ready for the next move. However, just because his load is heavier doesn’t mean he just throws it all in haphazardly.

“I do two things to make sure my tackle is properly set up,” he said. “I try and keep my heavier gear like jigs, sinkers and bulk plastics to the rear of the boat, and I also try and balance the load. If I put all of my heavy stuff on one side, my boat won’t run right either.”

Propeller Care
Propeller performance is based on several factors, but to be simple, a 25 pitch propeller is designed to propel a boat forward 25 inches on each revolution of the propeller. If the propeller is out of balance, or if there is some other imperfection in the prop, then a phenomenon known as slip comes into play. 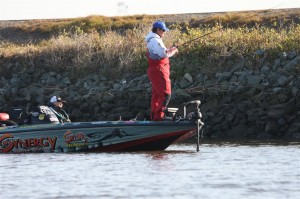 Depending upon the severity of the imperfection, be it from the manufacturing process or from damage caused by the driver, propeller slip can rob a vessel of 25-percent of its performance or more. With the example of a 25 pitch propeller, the loss of 25-percent of forward motion might seem small (6.25 inches), but translate that over a mile, and the boater might as well be running a 19 pitch propeller.

Roy and Crochet are both aware of the shape of their propeller. “My Mercury Fury propeller is the best one on the market right now,” Roy said. “But, if it’s not in great shape, I lose the performance that Mercury intended for my Triton. I check my prop for scratches and dings and replace it if it needs it.”
Crochet echoed Roy by saying that he too looks after the propeller on his Yamaha. “A beat up propeller is terrible on the water,” said Crochet. “It kills efficiency and performance and I can’t have that.

Fuel Problems
Roy and Crochet both know how today’s fuels can create problems for outboard engines. The ethanol that is being mixed in for air pollution levels can not only rob horsepower from and outboard, but it can also create engine failure as well.

While they both seek the highest efficiency on the water, the total loss of a powerhead during practice or competition can be the difference between making a check in a single event, and the Bassmaster Classic at the end of the year.
Roy and Crochet teamed up with a company that produces a product known as BioborEB this year. BioborEB is designed to help combat the negative issues with ethanol in their fuel. 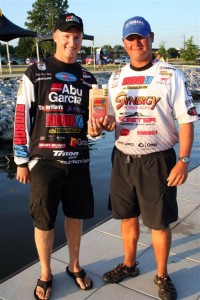 Roy knows that the problem can start in the fuel tank itself. “It doesn’t take long, after a few days ethanol and gas begin to separate inside your fuel tank,” Roy Said. “The only way to stop this is by adding BioborEB to stop fuel phase separation and keep your motor running strong.”

Crochet likes that adding the supplement to his fuel is like a running tuneup. “I really like knowing that I’m cleaning my engine every time it’s running,” he said. “BioborEB is taking care of the carbon deposits left behind by the ethanol in fuel; it has made my engine run stronger, cleaner and I’ve saved some money by adding only a couple ounces to each tank I’ve run through my boat this year.”

Other Tips
Both pros have other tips that will ensure effective outings. Roy prefers to inspect his boat and ask for a little advice at the outset of the year. “One thing I do is check to make sure bolts and screws are tight throughout the year,” he said. “A loose bolt can cause problems when you least expect it.”

He also recommended that anglers consult a knowledgeable mechanic for setup options.

Crochet said that he is a big fan of hydraulic jack plates. “I run a lot of shallow water, and having the ability to adjust my motor height makes a big difference for me,” he said. “I can also dial in my plate to get the best performance each day; which makes me more efficient and saves operating expenses.”