Wake ’em Up with Big Topwaters – with Preston Henson 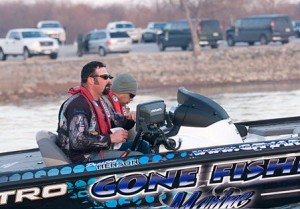 Preston Henson at a Tournament Takeoff

Summer is upon us and bass metabolism is at an extremely high rate. The fact that bass are a cold blooded creature means that the warmer water conditions elevates their body temperature, and therefore, they digest food more rapidly. This means that they need to eat more frequently. Or, when the opportunity provides itself, they need to eat larger meals.

The usual way to capitalize on a feed in this early summer is to search out shad spawning activity. The bass will respond to the clouds of manic shad spawning near the grasslines and floating docks by crashing through the schools with reckless abandon. But, that bite shuts down soon after the sun crests the hills.

Preston Henson, a former Bassmaster Opens pro, and a competitor on pro and regional circuits in the West, said that he likes to appeal to the biggest bass in the lake by upsizing his offerings this time of the year, and fish them on top. “In fishing tournaments, I really try to get five bites and make sure they are the right quality,” he said. “From prespawn through summer, the best way to do that is use big baits on the surface.”

For Henson, that means oversized topwater plugs and swimbaits that float. “I use baits from six to eight inches long,” he said. “I know that seems way too much in some areas in the country, but let me assure you, the right fish eat them.” 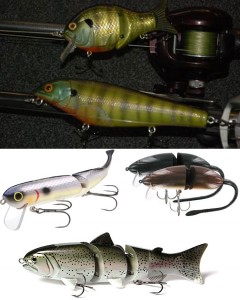 Why so Big?
One of the first things anglers in many parts of the country exclaim when they see a so called “Western swimbait” is that it’s way too big. Henson is quick to point out that bass in lakes all over the country eat large forage. “Have you seen some of the big gizzard and threadfin shad and shiners that swim in lakes all over the country; they’re huge,” he said. “It’s not the bass that have a hard time with larger baits, it’s the anglers, and they should really try throwing bigger baits; they’ll be surprised.”

Henson’s arsenal consists of six to eight-inch Black Dog Baits Lunker Punker topwaters, a Black Dog Shellcracker, six-inch wake baits called OB Minnows and floating eight-inch SPRO BBZ1 swimbaits. He uses them all as surface baits, and he has specific times in which he uses each style.

What he is referring to here is his starting point. His belief is that by using the bass’ natural mood as a starting point, he can adjust each way, depending on how they respond. “The Lunker Punker’s hard, slashing action is more of an aggressive action, while the wake baits are more subtle, and appeal to finicky fish,” he said. “They both can be fished aggressively, but I try to make sure they have distinct action for specific times.”

If bass are heading to their spawning beds, he uses the six-inch wooden Lunker Punkers, usually in trout color, Delta Shiner, or if he is fishing for spots, a custom Morning Dawn (pink) color. If bass have gone postspawn, he opts for a six-inch shad colored OB Minnow, a jointed, wooden bait carved to look like a fish. Or, if he is fishing for larger bass, he turns to a Silver Fish or Hitch colored BBZ-1. If bluegill are spawning, he turns to Back Dog’s Shellcracker floating bluegill imitation, which he wakes and twitches on the surface. 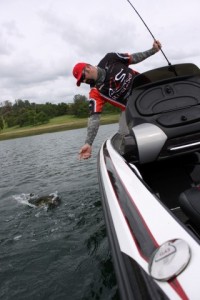 Gear
The one word that he said was important when selecting gear was “stout.” He said having the kind of gear that could handle giant strikes is critical. “I use a 7’6″ to 8′ heavy swimbait rod for throwing and working these lures,” he said. “I choose a 6.4:1 Lew’s Super Duty reel filled with 65-pound-test braided line to make sure I can control the fish.”

Retrieves
His primary retrieve with the Lunker Punker is a short, aggressively snapped walk the dog retrieve. He uses that retrieve to draw aggressive fish to the bait. If he gets a strike on it, and the fish misses the bait, he makes long, lazy glides with the lure to try and mimic a prey item that has been injured. “A lot of times they will crash it and miss, but if you change up the retrieve, they think they injured it, and will come back again,” he said. “But, until they crush it, the short snappy retrieve is best.”

With the wake bait, he slowly retrieves the lure around cover or over shallow structure and waits for the strike. Again, if they miss the bait; or they follow it, he makes twitches to make the lure appear scared or injured.

Where
Henson focuses his efforts in the prespawn and the postspawn in much the same places. “I look for secondary points leading into and out of spawning areas in both periods,” he said. “By targeting those areas, I can intercept them on their way in to spawn, or their way out for recovery.” 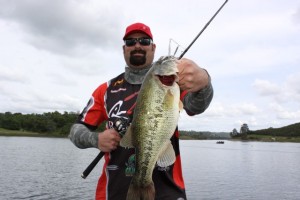 Once the spawn is over, he looks for points with additional structure or cover near main lake areas. “If I can find a point that has grass on it, large boulders or bluff ends near the main channel in summer, then I target them with the big surface baits,” he said. “I throw it across the cover and points, and parallel to them waiting for a response. If I don’t get a blowup in a few casts, I move on to the next point.”

One additional bait that he carries is for a specific situation involving rip rap, and that is a rat type lure. “I’ve used a Jerry Rago Rat in the Delta for years on high tide around rip rap,” he said. “It’s the one time that I’ve actually seen real rats swimming along the bank as their homes get flooded, so that’s when I use them.”

Wrapping Up
As a West Coaster who spent several years in the South competing on the Bassmaster Southern Opens, Henson had strong measures of success with his approach. “I know there is a level of discomfort for anglers throughout the country with the size of some of these lures,” he said. “But, bass eat six to eight-inch forage all the time, I urge everyone to give them a try, they won’t be disappointed that they did.”