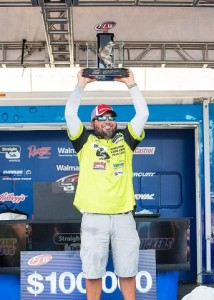 “I was beginning to wonder if this would ever happen again,” said Hackney, who has earned more than $1.1 million in FLW competition. “It’s so hard to win one of these because it’s four days. There are so many variables and these guys are so good. These tournaments are getting harder and harder, so to get the win is a blessing.”

Hackney said that he fished differently than most of the other professionals competing in the tournament this week. Instead of targeting deep ledges, Hackney keyed on a shallow bar that had three different mussel piles on it.

“The bar is maybe a couple of hundred yards long, half-way between the bank and the river channel,” Hackney said. “The fish were set up on the mussels on the upstream side of it. I found the school about 45 minutes into the first day of practice. There was an oil slick about the size of my boat and truck. It was from the bass feeding on gizzard shad. I’d seen it before while saltwater fishing, but I’ve never seen it in freshwater. I made a cast and could feel my crankbait running over their backs because there was so many fish there.

“I didn’t realize until the first day of the tournament that it was a live bottom – covered in big mussels. I would set up on top of the bar in 5-feet of water and cast out to about 7½-feet deep and drag back up the heel. That’s where they were. Every fish that I weighed in this week came from 6-feet of water or less.”

Hackney said that his key baits for the first two days were a Strike King KVD HC 2.5 square-bill crankbait and a 7 ½-inch Strike King Shadalicious swimbait fished on a ¾-ounce jig head. After the gizzard shad left his area on Saturday, Hackney switched to a ¾-ounce Strike King Denny Brauer Structure Jig in two specific colors – a green-pumpkin jig with a Double Header-colored Strike King Rage Craw and a black and blue jig with a Plum Crazy-colored Rage Craw.

“You always think you have a shot at winning – it’s why we fish these tournaments. But, I had no idea that I was going to,” Hackney went on to say. “It’s been a heck of a week. I must have had 60 spectator boats watching me yesterday. These kind of tournaments don’t just happen. When you find a spot like that, it’s the spot of a lifetime.”

Overall there were 50 bass weighing 207 pounds, 14 ounces caught by pros Sunday. Each of the final 10 pros brought a five-bass limit to the scale.

Braxton Setzer of Auburn, Ala., won the co-angler division and $20,000 Saturday with a three-day total of 15 bass weighing 51 pounds, 7 ounces, followed by John Jacobs of Birmingham, Ala., in second place with 15 bass weighing 50 pounds, 8 ounces worth $7,500.

Pros competed for a top award of up to $125,000 this week plus valuable points in the hope of qualifying for the 2014 Forrest Wood Cup presented by Walmart, the world championship of bass fishing. The top 35 anglers in the point standings from the six events on the 2014 Walmart FLW Tour will qualify. The 2014 Forrest Wood Cup will be in Columbia, S.C., Aug. 14-17 on Lake Murray and is hosted by Capital City Lake Murray Country. The winning angler in that event will win $500,000 – professional bass-fishing’s richest prize.

The Walmart FLW Tour stop on Pickwick Lake presented by Straight Talk Wireless was hosted by Florence/Lauderdale Tourism. It was the fifth of six events in the FLW Tour’s 2014 season. The sixth Walmart FLW Tour event of 2014 will be held at Kentucky Lake June 26-29 in Paris, Tenn., and is presented by Evinrude. The event will be hosted by the Henry County Alliance, and boats will launch from Paris Landing State Park in Buchanan, Tenn. For a complete schedule, visit FLWOutdoors.com.