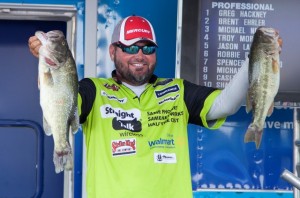 FLORENCE, Ala. (June 7, 2014) – Pro angler Greg Hackney of Gonzales, La., brought a five-bass limit to the scale Saturday weighing 22 pounds, 4 ounces, giving him a three-day cumulative total of 15 bass for 75 pounds, 14 ounces and extending his lead heading into the final day of the Walmart FLW Tour at Pickwick Lake presented by Straight Talk Wireless. He now holds a 7-pound, 13-ounce lead over second-place pro Brent Ehrler of Redlands, Calif., in the event that features 165 of the best bass-fishing anglers in the world casting for the top cash award of up to $125,000.

“Today was a lot harder, and it took me a lot longer to really catch them,” said Hackney, who has one previous career victory on the Walmart FLW Tour – the 2009 Forrest Wood Cup. “The quality was still pretty good, but I didn’t catch the sheer numbers that I had been catching. I only had 12 to 15 keepers today when I’d been catching 30 or so the first two days. It was a grind.”

Hackney said that he thought the increased current had a negative effect on his area.

“It doesn’t make any sense and I don’t really understand it,” Hackney said. “The shad were gone, and that’s been the whole key for the first two days. Today it seemed like the fish were scattered out looking for them.

“I caught all of my fish today on a totally different bait than I had been fishing all week,” Hackney continued. “Everything I caught came on a Strike King Denny Brauer Structure jig, fishing really slow. That jig is the deal when casting off-shore. It’s replaced all of my football jigs.”

When asked if he felt comfortable heading into the final day of competition with nearly an 8-pound lead, Hackney was realistic.

The top 10 pros advancing to the final day of competition on Pickwick Lake are:

Braxton Setzer of Auburn, Ala., won the co-angler division and $20,000 Saturday with a three-day total of 15 bass weighing 51 pounds, 7 ounces, followed by John Jacobs of Birmingham, Ala., in second place with 15 bass weighing 50 pounds, 8 ounces worth $7,500.

“It’s such a privilege to get to fish here,” said Setzer, who earned the first victory of his career. “This lake is full of fish. I’ve been fishing my gut instincts all year and I’m having a phenomenal season. My goal this year was to make one more top-20 cut than I did last year and I accomplished that with this tournament. Now I just get to go fish on Kentucky Lake and see where I wind up in the points.”

Setzer said he caught fish throughout the week on a jig and a drop-shot rig, but his key bait was a shaky-head rig with a Zoom Trick Worm.

The final 10 pros will take off from McFarland Park located at 200 James M. Spain Drive in Florence at 6:30 a.m. on Sunday. Sunday’s final weigh-in will be held at Walmart located at 2701 Cloverdale Road in Florence beginning at 4 p.m.

Fans will also be treated to the FLW Expo at Walmart on Sunday from noon to 4 p.m. prior to the final weigh-ins. The Expo includes Ranger boat simulators, a Chevy Truck Tour, the opportunity to interact with professional anglers, enjoy interactive games, activities and giveaways provided by sponsors, and fans can learn more about the sport of fishing and other outdoor activities. All activities are free and open to the public. Country music star Chris Janson will perform a free live concert on the Walmart weigh-in stage at 3 p.m.

Coverage of the Pickwick Lake tournament, hosted by Florence/Lauderdale Tourism, will be broadcast in high-definition (HD) on NBC Sports Network when “FLW” airs Aug. 10 from 11 a.m.-12 p.m. ET. The Emmy-nominated “FLW” television show is hosted by Jason Harper and is broadcast to more than 564 million households worldwide, making it the most widely distributed weekly outdoors-sports television show in the world.