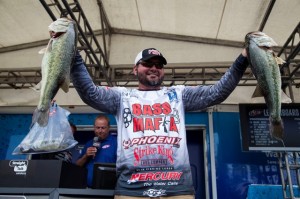 FLORENCE, Ala. (June 6, 2014) – Veteran pro Greg Hackney of Gonzales, La., brought a five-bass limit to the scale on Friday weighing 31 pounds, 12 ounces to grab the lead after day two of the Walmart FLW Tour at Pickwick Lake presented by Straight Talk Wireless. The four-day event, hosted by Florence/Lauderdale Tourism, features 165 of the best bass-fishing anglers in the world competing for a top cash award of up to $125,000.

“Only one other time have I ever found one school of fish that was better than today, and that was at Falcon Lake when I set the FLW record for the heaviest three-day weight,” said Hackney, a former Forrest Wood Cup champion who has won more than $1 million dollars in FLW competition. “Today was just one of those deals, I can’t even explain it. Once I got 25 pounds I figured I might as well see if I could catch 30. That was way more than I ever dreamed I could catch.

“I caught 25 to 30 keepers in little spurts,” Hackney continued. “There is a way to catch the bigger ones and I’m hoping that I have figured that out. When they’re biting, you can catch them every cast. But when I do the ‘right thing’ it doesn’t catch anything but big ones. When it goes down, it is as awesome fishing as it gets.”

Hackney said that he caught fish Friday on a dozen different baits, but he had two that were really seeming to produce the bigger ones. He said that the current hadn’t really played a role at all for him this week and that his pattern was more of a timing deal.

“I’ve been really fortunate and haven’t had to rely on the current,” Hackney said. “It’s a timing deal, but it goes down pretty quick. When it does, you have to be ready to make the right lure change. Only a couple baits are producing the big ones. There was one other guy that fished the same area a little bit. He was there this morning when I got there, but when I really started catching them he backed off. He’s that kind of guy and I really appreciated that from him.

“I’ve accomplished my goals over the first two days,” Hackney went on to say, referencing the fact that he needed a strong finish to remain in contention to qualify for the 2014 Forrest Wood Cup. “Whatever happens after this is all bonus.”

The top 20 pros that will fish Saturday on Pickwick Lake are:

Bill Day of Frankfort, Ky., won the Bridgford Big Bass Award and $500 Friday on the pro side with a bass weighing 9 pounds, 8 ounces.

Pro Rich Dalbey of Greenville, Texas and co-angler Alan Woodford of Winslow, Ind., had their day two weights zeroed after inadvertently violating FLW Tour rule No. 13. The duo broke down on the water and Woodford received a ride in from another competitor (permissible under FLW rules) but did not adequately mark their fish. Rule No. 13 states that in those situations, the fish must be adequately marked so as to provide clear distinction of the pro’s catch and the co-angler’s catch to the tournament director.

Anglers will take off from McFarland Park located at 200 James M. Spain Drive in Florence at 6:30 a.m. each morning. Saturday and Sunday’s weigh-ins will be held at Walmart located at 2701 Cloverdale Road in Florence beginning at 4 p.m.

Fans will also be treated to the FLW Expo at Walmart on Saturday and Sunday from noon to 4 p.m. prior to the final weigh-ins. The Expo includes Ranger boat simulators, a Chevy Truck Tour, the opportunity to interact with professional anglers, enjoy interactive games, activities and giveaways provided by sponsors, and fans can learn more about the sport of fishing and other outdoor activities. All activities are free and open to the public. Also on Sunday, country music star Chris Janson will perform a free live concert on the Walmart weigh-in stage at 3 p.m.