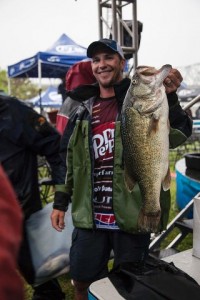 FLORENCE, Ala. (June 5, 2014) – Pro angler Jeff Gustafson of Keewatin, Ontario, Canada, caught the biggest bass of his life Thursday – a huge 10-pound, 12-ounce monster – to anchor his five-bass limit and grab the lead after day one of the Walmart FLW Tour at Pickwick Lake presented by Straight Talk Wireless.

Gustafson now holds a slim 15-ounce lead over ledge-fishing guru Randy Haynes of Counce, Tenn., heading into day two of the four-day event, hosted by Florence/Lauderdale Tourism, that features 165 of the best bass-fishing anglers in the world competing for a top cash award of up to $125,000.

“I’ve never been in this position before, but it feels pretty awesome,” said Gustafson, who is fishing his second season as a professional at the sport’s highest level. “This place is a lot of fun. I’ve been fishing in Mexico five or six times and fished all over Florida, but I’ve never caught a bass over 10 pounds. It was a pretty special experience.”

Gustafson said that he fished around the ledges in the mid-lake area, but tried to target areas that were more subtle and didn’t have as much pressure.

“I was one of the last boats out today, so the couple of spots that I wanted to start on were loaded up,” Gustafson said. “I just don’t have the nerve to pull up on everybody. On the last day of practice I found a spot that was pretty inconspicuous, or so I thought. I left and every 10 minutes another boat was pulling in there. That kind of turned me on to looking for the more subtle spots.”

Gustafson said that his main baits were a crankbait and a jig. He said that he would use his crankbait to find the fish, then once he located them he would go after them with the jig. He also weighed in one fish on a swimbait.

“I caught probably 40 fish throughout the day, but by 10 a.m. I only had two,” Gustafson said. “I’m not sure if they started moving water, but it picked up around lunchtime and was good for a few hours. I got on a spot where my co-angler and I both were literally catching them every cast. I caught the big one, then I caught two 3-pounders on a crankbait on the same cast.

“Tomorrow I’ve got an early boat draw,” Gustafson went on to say. “I’ve got a spot in mind that I want to start on then after that it’s just go with the flow. I have five or six spots that I never made it to today just because I was pretty happy with my weight and I didn’t want to burn anything up. Hopefully I can put another solid limit together.”

The top 10 pros after day one on Pickwick Lake are:

Gustafson also won the Bridgford Big Bass Award on the pro side Thursday with his monster bass weighing 10 pounds, 12 ounces to win $500.

Fans will also be treated to the FLW Expo at Walmart on Saturday and Sunday from noon to 4 p.m. prior to the final weigh-ins. The Expo includes Ranger boat simulators, a Chevy Truck Tour, the opportunity to interact with professional anglers, enjoy interactive games, activities and giveaways provided by sponsors, and fans can learn more about the sport of fishing and other outdoor activities. All activities are free and open to the public. Also on Sunday, country music star Chris Janson will perform a free live concert on the Walmart weigh-in stage at 3 p.m.