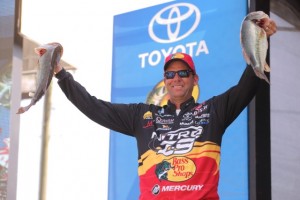 by Jay Kumar of Bass Gold and Bass Blaster

Kevin VanDam finished second at this year’s Bassmaster Elite Series event on Chickamauga Lake in Tennessee, and he did it by having about a dozen different baits tied on and ready to fish. That sounds odd for a guy known to be able to zero-in quickly on what the bass want, but that’s just the way it is when you’re fishing deep, he says.

“Shad are the focus” in the summer, he says. “I’m not saying bass don’t still eat a lot of crawfish because they do. But when I pull up to a ledge I’m looking for shad.

“If you’re on a lake that has power generation, that moving current typically puts the bass on top of a ledge in position for them to target shad as they come drifting down with that current. That’s when a crankbait is really effective.

“Day in and day out, a crankbait is my go-to bait for ledge fishing,” he says. “It’s an efficient tool to cover a lot of water, you can get it down there quick, and when it’s grinding the bottom – when that bait is skipping and kicking around – it’s great at triggering neutral bass.

“So I almost always show them a crankbait first, even if they’re not moving a lot of water and the fish aren’t in the most active mood. In a lot of cases you can still get them to bite a crankbait. And once you catch the first fish on a crankbait, you can fire the rest up and catch them back to back.

“If I’m marking fish and can’t get them to bite a crankbait – if I’m marking fish on a drop, point or ledge, they don’t bite and I might not know for sure they’re bass – then I’ll drag a Strike King Tour Grade Football Jig or Denny Brauer Structure Jig, both matched with a Rage Craw trailer, on the bottom and try to get the bass to react.

“I did that on the Chick,” he notes. “I spent a lot of time in practice graphing, looking, finding spots and marking fish. I’d crank ’em, but couldn’t get much of a reaction.

“For the most part very little water was moving,” he explains. “Plus those fish get a lot of pressure – the lake is right outside a major city, a lot of anglers fish it and you probably have tournaments three or four times a week there. I think those fish were conditioned to seeing a lot of crankbaits. 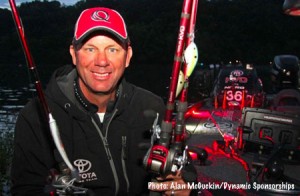 “So I went to something that’s fished slow, that stays in front of the fish a long time, and looks real natural – like a jig or worm.”

Fishing slow doesn’t sound like KVD. “When I’m ledge fishing, I try to find the most efficient tool,” he says. “But once you find a spot that holds fish, you need to throw everything you have at them. You never know on any given day when you’re ledge fishing what the best bait is going to be.”

On Chickamauga, Kevin had the following baits tied on and ready to go:

“They were all ready to go, and I just experimented with them until I caught one,” he says.

“It’s almost like bed-fishing: You never know what bait in what color will get that fish excited. Ledge spots can be like that too.”

One of the key things he does with all the baits is vary his retrieve speed. “With the crankbaits, I’ll speed up and slow down,” he says. “With the jig, I’ll drag it along then snatch it. Changes in speed and direction really help generate strikes.

“Color-wise, a general rule is if I can see a bait down 3 feet or more, I start thinking about using more clear or natural colors. If it’s less than 3 feet, I’ll use brighter colors.”