by Ken Duke – special to AdvancedAngler.com 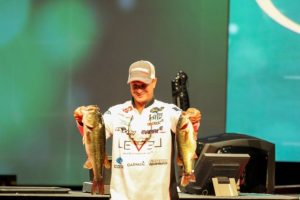 The 2017 Forrest Wood Cup on South Carolina’s Lake Murray was different. It had a different format than previous championships. The catches were very different than what was expected. And the anglers who ended up on top of the leaderboard were different from the pre-tournament favorites.

For the first time in its 21-year history, the Wood Cup was a three-day event, not four. Whether it was changed to add excitement or to show mercy to the anglers and bass struggling in the heat is uncertain, but it certainly impacted tournament strategy. 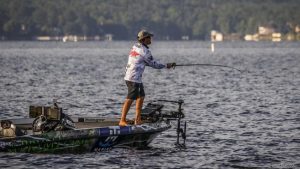 Before the tournament, anglers were predicting winning weights between 41 and 45 pounds — about 14 pounds a day. As it turned out, 14 pounds a day would not have secured a spot in the top 10 for the final round. And it took nearly 20 pounds a day to win.

In 2014 on the same body of water, Anthony Gagliardi needed 51 pounds, 2 ounces over four days to win the Wood Cup. This year, in just three days, he topped that mark by an ounce, but it was only good enough for fifth. 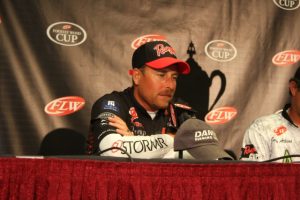 Atkins, at 27 years and 5 months of age, is the fourth youngest Wood Cup champ in history (Jacob Wheeler was 21 when he won in 2012). Atkins is also the fifth angler to win the championship in his first appearance, and the first since 2010 (Kevin Hawk). 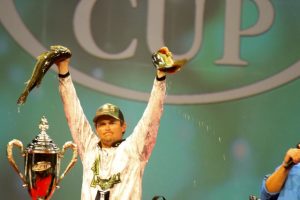 But Atkins wasn’t the only successful rookie. He was one of three to make the top 10 and qualify for the finals. Travis Fox finished the championship in second place, and Aaron Britt was 10th. It was the first time since 1997 that rookies took the top two spots (and because ’97 was just the second year of the championship, practically everyone in that field was a “rookie”).

Bryan Thrift, the 2017 FLW Angler of the Year, continued to impress in the championship and continued to fall just short of victory. His 51-15 total far exceeded early predictions of what it would take to win, but was only good enough for fourth place. Nevertheless, that’s the best-ever finish in the Cup for a reigning AOY, and Thrift’s five career finishes in the top five and nine in the top 10 are both Cup records. 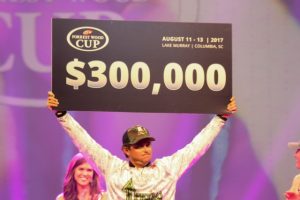 But the star of this year’s Cup may have been the lake itself. Murray turns 90 this year, but doesn’t fish its age. And despite their long-term potential for adverse impact, blueback herring were certainly the cause for the strong topwater bite that carried the entire top 10 finishers to big paydays.

In two previous Forrest Wood Cups on Murray in 2008 and 2014 (294 total angler days of competition), there were 10 daily catches that exceeded 15 pounds. That tally was equaled on the first day this year! By the end of the tournament, it had been done 23 times in just 116 angler days. That’s an increase from 3.4 percent to 19.8 percent.

On his way to the win, Atkins posted two of the five heaviest catches in Cup history, and Lake Murray now has seven of the top 10 spots, claiming five of them at this year’s championship. 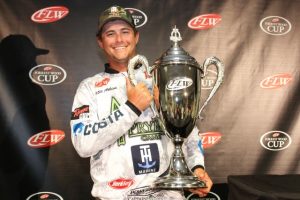 The 2017 edition of the Forrest Wood Cup was a championship marked by young talent and marred by too many dead fish, but it was one that should keep fans buzzing and locals bragging about their summertime topwater bite.