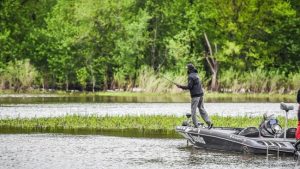 I must admit that the learning curve for me has been pretty steep since I moved to Alabama.

Having come from the predominantly deep, clear reservoirs of The West, summer to fall fishing to me means a few precious hours of topwater, followed by light line and deep water.  Even when fishing the California Delta and Clear Lake, the water is clear enough that fishing 15 feet or deeper is common.

However, since I moved to Alabama, and setup my “fishing home on the Coosa River’s Neely Henry Lake, I’ve learned that bass on the rivers here tend to live shallow.  To be perfectly honest, I first experienced it while covering the Bassmaster Postseason in 2010 on the Alabama River.

I couldn’t believe how shallow they were fishing.  Those anglers spent their whole fishing day glued to shoreline water willow and offshore bars that were three feet deeper and shallower.  Being a West Coast guy at the time, it really made me think.

I recently had a conversation about it with second year FLW Tour pro Brian Latimer. The Belton, S.C. pro, like I had, fishes a deep, clear body of water (Lake Hartwell), but he also spend significant amounts of time fishing small rivers near home from a shallow running aluminum boat.

“I learned pretty quickly that in certain situations, the fish get really shallow in not only the rising, muddy waters of spring, but also in the summer and early fall seasons,” he 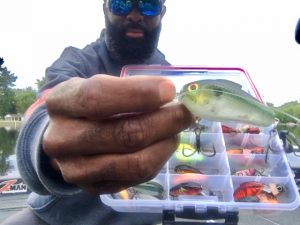 said.  “While I might spend a lot of my time offshore at some reservoirs; I live in the dirt on those rivers; and my favorite technique for it is shallow cranking.”

Why Shallow Cranking in Hot Water?
Don’t get me wrong, Latimer carries an ample supply of target fishing tools, but he said there are really good reasons to appeal to the bass with moving baits.  “When the water is hot – as it can get in The South – the bass’ metabolism is really sped up,” he said.  “What that means to me is that fish are going to be in an aggressive, feeding mode more frequently than at other times of the year.

Latimer will start a day with topwaters and Flippin’baits on the deck of his boat, but the lure that allows him to cover the most water and still impact targets effectively is an Echo 1.75 squarebill crankbait from Bill Lewis Lures, the makers of the Rat-L-Trap.

The reasons he prefers the Echo 1.75 are numerous.  “It’s an incredibly durable lure that makes a big presence in the water and it comes through cover really well,” he said.  “I can throw the Echo in places that I should never consider throwing a treble hooked lure, and get it back through the cover very effectively; I think they often eat it because they don’t see these kinds of baits in these areas where they live very often.”

Where and How to Shallow Crank
Latimer said that while this time of the year is one of his favorite times to throw the Echo on super shallow cover, it is not the only time he throws it.  “I like it any time that the fish are shallow and looking to feed, he said.  “It is good in the prespawn, the postspawn, and now through the fall.”

He likes to use it on shallow banks and in pockets with laydown trees, docks, rocks and stumps.  He also likes it over grass flats where the grass has not topped out to the surface, and in the Northern fisheries, he likes them over the gravely flats where big smallmouth hungrily roam in search of food. 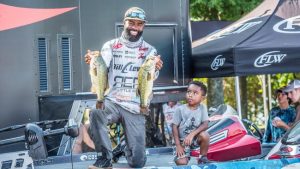 His target depth for the cover is between 1.5 to 5 feet, and he achieves that range with his line size.  “If I’m fishing really heavy wood, than I go with 15 to 20-pound-test Seaguar Senshi Monofilament because the stretch helps the lure deflect in wood cover,” he said.  “In every other instance, I use Seaguar’s Tatsu Fluorocarbon because it handles so well on the spool and is great around grass and rock.  I can go to 12-pound line and get it to run close to five feet, but I prefer 15 to 20-pound line to keep it running shallower.”

He typically throws the Echo around targets on a 7’ medium action Favorite Fishing Rush rod, and if he is fan casting over flats, or trying to cover water down a chunk rock bank, he opts for the 7’3 version to give him a little but more distance casting and leverage.

He suggests throwing the Echo on a 5.3:1 retrieve speed reel to allow the bait to do its thing.  “There is a really aggressive action to this crankbait, and it displaces a ton of water,” he said.  “You really want this lure to be fished at more of a medium speed to be in its sweet spot. 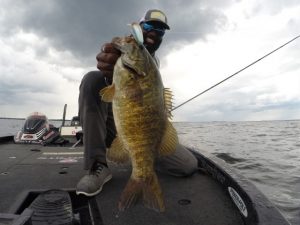 He also suggests that anglers employ a steady retrieve and allow the lure deflecting off of cover to provide the additional action.  “I really try to bang the lure into cover, and just try and grind through it,” he said.  “The lure has so much presence that it doesn’t need much else to be effective.”

Choosing Colors
Like most professionals, Latimer sad he lets the water clarity dictate his color selections.  However, he offers one additional tip on that topic.  “I usually back off the color a little because of the aggressive action of the lure,” he said.  “Unless the water only has a few inches of visibility, I tend to go a little more subtle on the color chart.”

With that in mind, his typical clear to lightly stained selections are usually Pro Blue and Ghost Minnow.  He opts for Sexy Chrome or Sexy Summer Shad in stained water and goes to Sexy West or Silverado if the water gets dirty, and if the water is downright muddy, he will then select Chartreuse Shiner.

Final Tip
Latimer suggested that anglers look at the nature of the lure when deciding how to fish it.  “The best thing I can say is don’t be afraid to throw it where you think you shouldn’t,” he said.  “It is an aggressive lure, so be aggressive with it.  Experiment, and the worst think that happens is you get hung up a little bit; but I also think you’ll find that it performs really well, and that you’ll get more strikes as a result.”