MONROE-WEST MONROE, La. (Feb. 9, 2022) – After surviving a tough four-day Qualifying Round on Lake D’Arbonne, the 38 Bass Pro Tour anglers that advanced to Wednesday’s Knockout Round on Caney 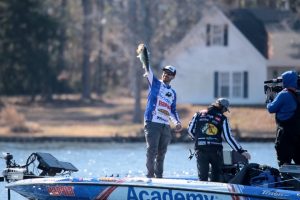 Creek Reservoir were rewarded with an incredible day of fishing, that included a new record for the all-time heaviest bass weighed in Bass Pro Tour competition.

When time expired at 5 p.m., Academy Sports + Outdoors pro Jacob Wheeler of Harrison, Tennessee, had tallied “one of the best fishing days of his entire life” – nine bass totaling 43 pounds, 7 ounces – to win the Knockout Round and advance to the final day of competition at the Major League Fishing (MLF) Bass Pro Tour  B&W Trailer Hitches Stage One Presented by Power-Pole in Monroe-West Monroe, Louisiana. Wheeler’s closest competitor was Berkley pro Jordan Lee of Cullman, Alabama, who boated six bass – including a pair of 8-pounders – for a total weight of 34 pounds, 10 ounces.

MLF NOW! analyst Marty Stone often likes to say, the best anglers will catch fish and win, no matter the format. His point was well proven, Wednesday, as Wheeler’s best five-fish weight would have been 32 pounds, 5 ounces, and Lee’s best five would have gone for 32 pounds even – magical days by any format.

The final 10 anglers are now set, and competition will resume Thursday morning with the Championship Round when weights are zeroed, and the angler that catches the most one-day weight will win the top prize of $100,000.

The six-day event, hosted by Discover Monroe-West Monroe, showcases 80 of the top professional bass-fishing anglers in the world competing for a total purse of $805,000.

The top eight pros from Wednesday’s Knockout Round that will compete in Thursday’s Championship Round on Bussey Brake are:

They’ll be joined by Qualifying Round winners:

Full results for the entire field can be found at MajorLeagueFishing.com.

“What an unbelievable day,” said an excited Wheeler said in his post-game interview. “That was so much fun. As many big ones as I caught – it was definitely the best tournament fishing day I’ve ever had. One of the best fishing days of my entire life.”

“Multiple different jerkbaits played for me today,” Wheeler said. “It was pretty much Jerkbait Fishing 101. I threw it on a 6-foot, 8-inch medium-action (Duckett) Kelly Jordon Pro Series rod with 12-pound Sufix line.

“I promise that this isn’t the last time that you’ll see me here,” Wheeler went on to say. “I’ll definitely be making a couple of trips back to Caney Lake, this place was unreal.”

Also having a special day on the water was Alabama’s Jordan Lee, who weighed in two fish over 8 pounds and one over 7 pounds.

“Today was just crazy, the size of fish that I caught today,” Lee said. “I only caught six, but they were big. It was an incredible day.

“I caught the first fish on a ½-ounce football jig with a Berkley Chigger Craw, and it was one of those 8s,” Lee said. “From then on, I couldn’t get those fish to bite. I could see them on my Lowrance, so that’s when I went to a little Ned Rig.

“I was cutting a Berkley Hit Worm in half and using that on a spinning rod, and that was pretty much my 1-2 punch out deep.”

Rounding out the top 40 finishers were:

Overall, there were 91 scorable bass weighing 342 pounds, 14 ounces caught by 32 pros on Wednesday, which included six 7-pounders, two 8-pounders, and one 10-pounder.

The 40 Anglers in Group A competed in their two-day qualifying round on Lake D’Arbonne Saturday and Monday – the 40 anglers in Group B on Sunday and Tuesday. After the two-day Qualifying Round, the anglers that finished in 2nd through 20th place from both groups advanced to Wednesday’s Knockout Round on Caney Creek Reservoir, while the winner of each group advanced directly to Thursday’s Championship Round. In the Knockout Round weights are zeroed, and the remaining 38 anglers competed to finish in the top 8 to advance to the Championship Round on Bussey Brake. Tomorrow, in the final day Championship Round, weights are zeroed and the highest one-day total wins the top prize of $100,000.

The final 10 anglers competing in Thursday’s Championship Round on Bussey Brake will launch from Bonner Ferry Road, five miles northwest of Bastrop off of Hwy 593 at 8:30 a.m. The General Tire Takeout will be held at the launch ramp, beginning at 5:30 p.m. Fans are welcome to attend all takeoff and takeout ceremonies and also encouraged to follow the event online throughout the day on the MLF NOW!® live stream and SCORETRACKER® coverage at MajorLeagueFishing.com.

The B&W Trailer Hitches Stage One Presented by Power-Pole features anglers competing in the Championship Round with a 2-pound minimum weight requirement on Bussey Brake for a bass to be deemed scorable. Minimum weights are determined individually for each competition waters that the Bass Pro Tour visits, based on the productivity, bass population and anticipated average size of fish in each fishery.